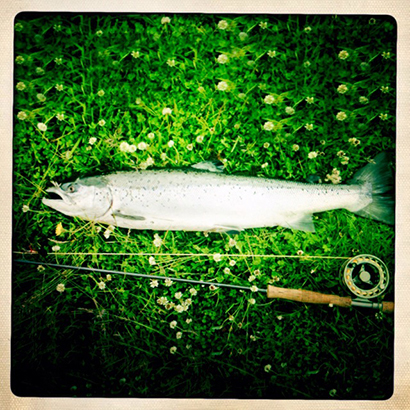 Of all the fish that swim in British waters, none evoke such awe, such splendour or have inspired so many words as the Atlantic salmon (Salmo salar).

Found from The Bay of Biscay up to the Arctic Circle and with a similar range on the western seaboard of North American, the salmon was once abundant. Sadly, its fine taste led to overfishing and numbers plummeted through the 20th Century.

Born in freshwater, the salmon migrate to sea as smolts, but always return to breed in the same place they left. This movement back into freshwater is when they are most vulnerable, as large numbers of fish will gather in estuaries and often move en masse when conditions are suitable. This century, efforts are being made to conserve salmon stocks and these seem to be bearing fruit.

Whilst at sea, the salmon grows fast, packing on body weight with a rich nutrient-packed diet. Back in the river, they are not believed to need to feed, and instead the angler must hope to prompt a reaction based upon instinct rather than desire.