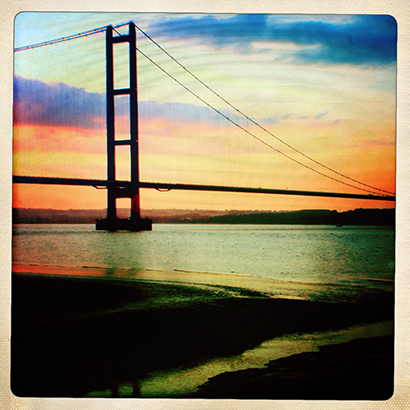 Measuring over 38 miles from east to west, the Humber Estuary is the second largest coastal plain estuary in the United Kingdom (After the Severn Estuary). Around 20% of England’s landmass drains into the North Sea through the estuary, via rivers such as the Trent (see Bits and Pieces Issue 16) and the Yorkshire Ouse (see Places we Like).

For many years, the Humber Estuary has been at the heart of the British maritime industry, with Ports at Hull, Grimsby and Immingham that still see an estimated 40,000 shipping movements every year.

Though the water is navigable by even the largest sea going ships, the average depth is only a little over 20 feet, and with such a large movement of water, both fresh and salt, the habitat is rich in sediment and life. Thousands of birds mass here in the winter to feast on the worm rich mudflats, while there are some enticements too for the angler.

Flounder are the dominant species, and they are present in significant number and to a specimen size. Cod (see Fish we Like) are also worth targeting, particularly in the winter months when the smaller fish (codling) move inshore to feed.

And after a cold day’s casting, there are about three billion chippies in the surrounding towns, with a billion in Grimsby alone (Fishpool is an angler and prone to mild exaggeration).

The River River?
The Yorkshire Ouse

Today is the 25th anniversary of my Dad's passing. Niall Fallon was his name. Dead now, longer than I knew him alive. I will always miss him, but his wisdom continues to be a guiding presence, long after he's gone. He wrote a highly regarded book on Irish fly fishing. I named my magazine is his honour, and to the honour of his brothers and parents who painted pictures, whether it be with words, or sculpture, or the use of a brush. I post this story every year, but it always makes sense. My Dad's greatest trout…
fallonsangler.net/out-of-the-darkness-my-biggest-trout/ ... See MoreSee Less

Fallon's angler is with Adam Chetwood.

The latest angler to bare all in our 'What's in your bag?' feature is musician Adam Chetwood.

Adam is fond of a spot of carp fishing, but is never more at home than on the banks of the Hampshire Avon chasing roach and chub.