My late father was a prodigious purchaser of fishing books: H.T. Sheringham, G.E.M. Skues, Charles Cotton, Frederick Halford, Zane Grey, BB, Dick Walker, Bernard Venables, Chris Yates and so the list goes on. But the one that stuck out the most was The Domesday Book of Mammoth Pike by Fred Buller. I was a teenager at the time, and I was struck by the sheer size of those monsters. 235 fish over 40 pounds was the stuff of dreams, or nightmares. Most accounts were accompanied by pictures of tough looking men, either holding or standing next to enormous fish. To a young lad, it may as well have been Zane Grey or Ernest Hemingway standing next to a marlin.

Suddenly I was infected with the primitive need to catch one, to have the trophy photograph on the wall, to taste the sensation of being a great angler. So I embarked on a long journey of monster-hunting, one made significantly more difficult by my own cackhandedness and general lack of angling ability.

The adventures of my older brother Devin would add their own spice into the melting pot. He often returned from grand adventures on the local river or canals with a dead pike across the handlebars, and stories of lost leviathans. Only years later did I fully equate the lack of hard evidence with my older brother’s teenage capacity to lie in an attempt to drive his younger brother mad with jealousy.

My first trip with any real intent was with my father on the river Boyne. It ran deep and brown behind the fields, meandering through the green pastures beyond the attention of all bar the most adventurous. It had a generous head of wily brown trout, and spikey, bullish perch. One Saturday, after the chores were done, and without warning, my father handed me the pike rod: “Right. Pike fishing then?” It was a right of passage, acknowledgement I was ready to play with the big boys. We would use spinners, spoons, and expensive looking plugs—dangerous looking tools of torture, treble hooks everywhere, a knitted jumper’s worst enemy.

I knew how to cast a line so he showed me how to adjust the vane at the front of the lure, so that the plug dived deep. I stood on top of the river bank and flung the plug across to a likely looking spot, and it plunged deep with the first few turns of the reel. I imagined it searching the depths, passing over the heads of giant fish waiting in ambush, but it reappeared under my feet. I was disappointed momentarily, until a huge set of jaws appeared from the gloom and devoured it. It frightened the bejaysus out of me and I lost my balance, falling into the river. The hellish yelp I’d let out and the noise of me crashing into the water attracted not only my father’s rescue attempt but a herd of curious cows, who’d come to see what kind of a thing it was that made such a noise. As my father helped me up the muddy bank I still had a fish attached to the other end of the line. The blasted thing had headed straight for a massive reed bank and was deeply entrenched, until I fought it free. For a few minutes I was a hero, then the line went slack, and I reeled in nothing at all except for the end of a badly tied knot. My Dad muttered something about expensive children and headed up river.

Later in life I headed to Lake Athabaska in Canada to fish for Lake Trout, and had the best day’s pike fishing I’ve ever had. We caught 136 pike that day, but nothing over 16.5lbs, until right at the end, when a big fish took my lure and gave me a mighty scrap. She circled the boat, dragging us this way and that, until she finally succumbed to the beefy tackle we were using. She was landed safely, then unhooked and placed into the weighing sling at the side of the boat, and then we went to lift her up under the scales… Well I didn’t ask whether to lift on the count of three, or to count to three then lift, so I lifted anyway, the sling tipped, and the fish slipped straight back into the lake. Not even weighed. Not even held in my arms, not a single photograph taken. I felt cursed. 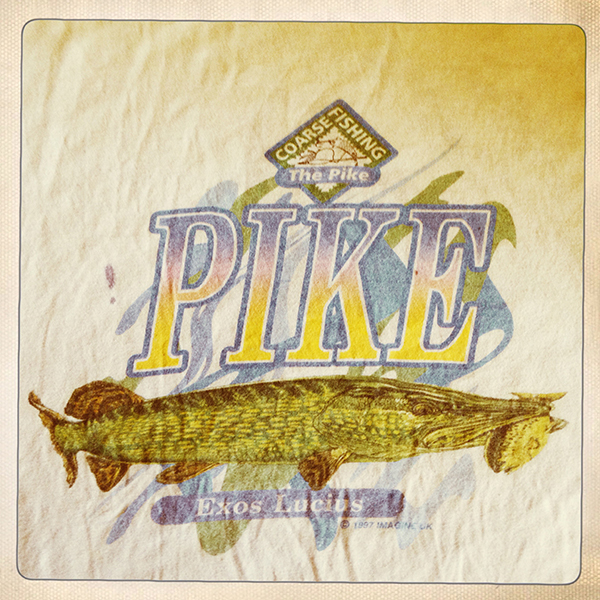 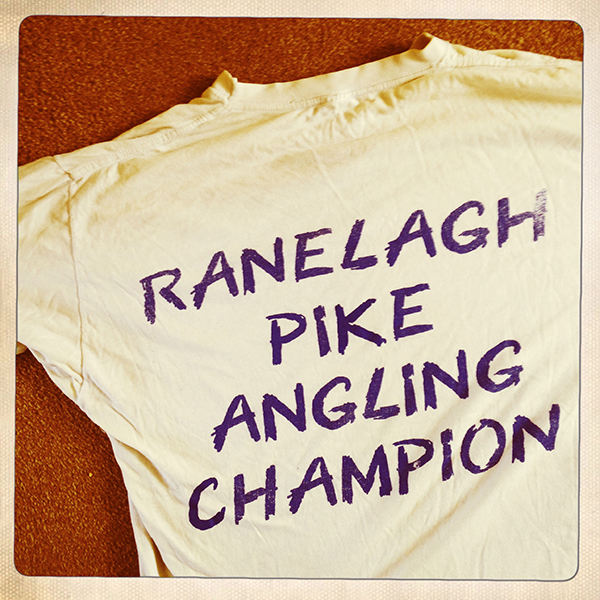 But it wasn’t all failure. Between piscatorial mishaps I managed to win the highly coveted (down the local boozer) Annual Ranelagh Pike Angling Competition, where the winner gets a few quid and a t-shirt to wear in the pub for a year. What a glorious day that was; more than a dozen of us travelling to the badlands of Cavan, and all-bar-one spreading out to the distant corners of the lake with spinners and lures, while I stayed put on a featureless part of the shore. This was in no way due to some sixth sense “knowing where to fish” malarkey or any sense of watercraft whatsover. It was all to do with the agonising hangover I was suffering after far too many beers the night before (oh the glorious folly of youth). I hadn’t sufficient energy to traipse around a lake, and needed to find myself a quiet spot where I could endure in relative peace and quiet. Eventually, after a few hours of bankside kip, I decided to fish for a while, and caught a six pound pike on a deadbait under a float (the least energy-sapping form of fishing I could manage), the only fish caught that day. I had a witness, thank heavens, but again no camera, in those heady days before smartphones when we all understood exactly what it was to be bored. My victory was hardly glorious in the grand scheme of things: “I’ve been Ranelagh Pike Angling Champion, and all I have to show for it is this bloody t-shirt.”

Finally, one cold, miserably January morning in Dublin I was collected by my friend Phil who had a job to do in a country town (that makes him sound like a bank robber, but I can assure he wasn’t), that sat close to a fine lake, fine for an afternoon’s pike fishing. We’d got to the end of my road when I realised I’d left my camera behind, again. “Ah sure, we probably won’t catch anything,” we agreed. A few hours later I was preparing to cast a half mackerel into Ballyhoe lake in Co Meath. It was fierce windy, a gale blowing horizontally across your face. Spray flew off the surface of the lake, the trees bent at 45 degree angles, protesting against the force of the wind.

I intended to cast to an island that, in memory, was about 50 meters away, but probably more like 10. To the left was a bank of reeds that closed the gap between the island and the shore—a good place for fodder fish—I reasoned. I was using a ridiculously unsuitable rod for the occasion, an old, thick 1960s float rod of about 11 feet, called Strike. It was beefy to say the least, a telegraph pole compared to todays wands of carbon. I tried to adjust for the wind, gave it a huge hoik and out the bait flew, whereupon the gale seized it and threw it so far to the right that it seemed almost impossible I didn’t’ intend to cast there, smack bang in the middle of the inlet. In the freezing cold my fingers were protesting angrily, and I couldn’t be bothered to do it all again, so I tried to reel in the excess line and set the bobbin under the bite indicator. But there was a huge bow in the line, flapping in the breeze like telephone wires in a hurricane, and with every gust of wind the indicator would shriek. No matter what I did, it wouldn’t shut up. Phil said to me: “Are ye sure it’s not a fish?” “No way,” I said. “I’ve only just cast.“ “Are ye really sure it’s not as fish? I think it’s a fish Garrett,” he protested. “It can’t be,” I replied. But the indicator wouldn’t shut up, so in frustration I picked up the rod and struck. 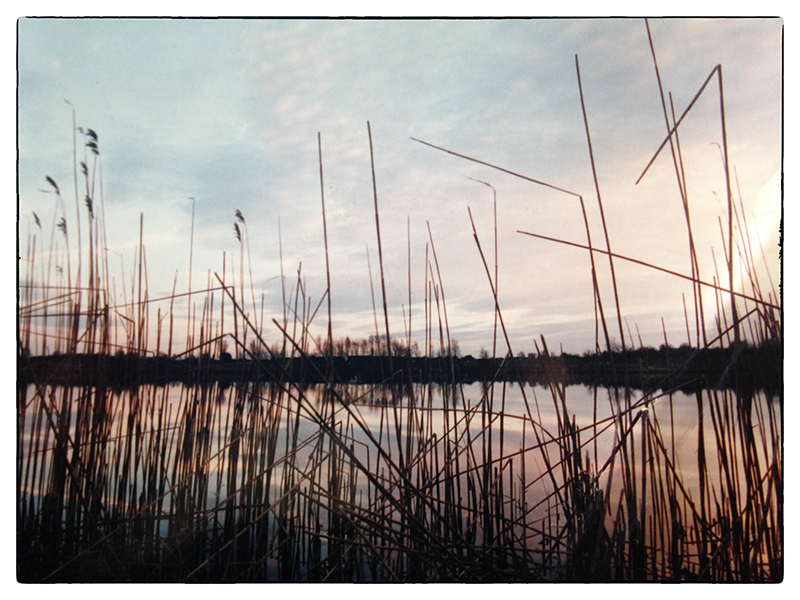 All hell broke loose. A huge splash erupted exactly where my bait had landed, which must have been right on top of the pike’s head. I reeled furiously and the drag on my Mitchell 300 broke, so I had no choice but to backwind to fight the fish. It was obviously a massive pike, far and away the biggest fish I had ever hooked, and Phil was keen to support me, but then it started raining—that really chilling, freezing, sharp, stinging rain that cuts your skin, driven on by the bitter wind—so my companion took shelter in the car, parked 50 feet behind. I fought that pike up and down the shore for what seemed like an eternity, severely hampered by the broken reel and the sheer power of the monster. Eventually it tired, and as a gap appeared in the clouds, and the rain abated, Phil rejoined the fray just in time to net it. We weighed her at 25.5lbs, hooked precariously in the side of the mouth. Then I remembered the blasted camera we didn’t turn back for, as “we’d probably not catch anything.” I sat with that pike in the shallows for a while, recording in my mind the thick scoops of gold in her skin, the complexity of colours in her scales, the myriad shades of green, purple and silver in her palette, then I let her go. At first she just sat there, about fifteen feet out in slightly deeper water, sulking. I was sure she was giving me the eye, then with a swish of her tail she disappeared into the depths and was gone forever. “At least I had a witness,” I reasoned, “but a shame not to have that bloody picture”.

My thoughts were interrupted by a 4×4 entering the car park behind. I turned around as it ground to a halt with a gravelly skid, and saw a man emerge carrying over his shoulder the largest camera l had ever seen.

“Howya,” he said. “I’ve come to photograph the birds. Fishing are ye? Did ye catch anything?”

An abbreviated version of this article appeared in the Angler’s Mail on 18th November 2014.