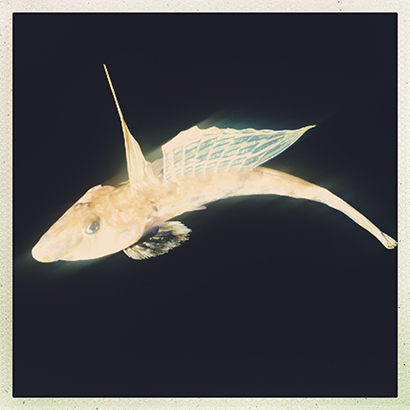 There are nearly 200 species of dragonet in the world, but in British waters we are most likely to encounter the common dragonet (Callionymus lyra). A member of the perciformes, which makes up two fifths of all fish (including the freshwater perch), the dragonet is a small species that takes its name from it’s spiny finned, dragon-like appearance.

They have large heads and long tapered bodies and are predominantly scavengers, though they will make the most of almost any food source that is available. The male common dragonet has a double dorsal, the first part of which is high and triangular, not unlike a sail, with the second longer and less pronounced. Both are elaborately coloured, with yellows and blues cutting through a dull brown. Females have considerably smaller fins which lack the colour of the male.

These are fish rarely, if ever, targeted on rod and line, though the recent growth of light rock fishing (LRF) in Britain will likely see many more of these splendid little chaps and chappesses caught. Who knows, a new British record might be caught any day now…..perhaps even a seven ounce monster!