“No, Sir, when a man is tired of London, he is tired of life; for there is in London all that life can afford.” Samuel Johnson

The close season allows the river angler a chance to explore without the temptation of casting a line. With my life currently following a frustratingly urban routine, I could no longer resist the call of the water, so I took my daughter for a stroll along the nearest stretch to me, on the banks of the River Ravensbourne near Lewisham in London this morning. As I wrote in 2014:

The Ravensbourne rises in Keston, South East London, and flows for 11 miles through the boroughs of Bromley, Lewisham and Greenwich, before joining the Thames. It is a mixture of urban regeneration and urban control, with areas bound in concrete sitting next to others that are as wild as any river in the countryside.

My first port of call was a stretch by Brookmill Park, previously unknown to me. Having wound its way through concrete culverts—somehow negotiating the melee that is Lewisham roundabout—the river bursts into life in a charming series of meanders creating a much wilder area where it has the space to flow out over one bank, before being quickly corralled by a wall and pathway above, forming a tiny flood plain, where all manner of plants have sprung up and made their grab for a part of the sky above. Further investigation reveals that this thriving environment was the direct result of the river being diverted from its original course and into Brookmill Park (in 1998), while the Dockland’s Light Railway (DLR) was built and now travels along the river’s original path.

I was hoping to spot some chub, or at the very least find some decent glides and swims, while perhaps developing a clearer understanding of where to fish when the new season begins, but the river was low and nothing showed.

Still, despite the lack of fish, an urban river has its own charm, and despite man’s best efforts at controlling it, whenever it gets the opportunity it quickly remembers what it is, and wherever enough debris forms, we see the wonderful variation of the small river and its shallow runs, deeper pools and gravel bars. It is a beautiful irony that a discarded shopping trolley can become a haven for small fry.

But there was still plenty of wildlife. Moorhens and coots busied themselves, while mallards appeared quickly, ready to squabble for bread, whenever we stopped on a bridge to peer down below, and a lone swan dozed in the sunshine, probably wondering how on earth he’d ended up in SE8. I then saw a flash of yellow, with a long tail – not the short stubbiness of a Blue Tit, but possibly a Grey Wagtail? In London? And then there were the ravens. Julius Caesar reputedly found the river courtesy of a thirsty raven that was followed by his troops. Many years later these birds still live high in the trees above, a reminder of its historical heritage.

We continued to follow the river upstream until we came to Ladywell Fields and a stretch that has been considerably “rewilded”. I had been there before, and knew there were chub, but we still couldn’t find them. The tiny river looked gorgeous in its spring clothes. The water was clear and shallow, and small pockets of weed clung to stones, while the remainder of winter’s debris clogged the flow occasionally, enough to create darker pockets of tantalizing water.

The banks here don’t see much angling pressure, and bore young willows dangling tendrils into the flow, dense crops of nettles and the thorns of blackberry, establishing quickly in preparation for fruiting later in the year, which perhaps gives me another reason to return.

I am always saddened at how little some people appreciate nature. Wherever access to the water was good, the riverbed was inevitably cluttered with discarded beer cans and other rubbish, the result of nighttime drinking sessions and clandestine drug users. Why can’t some people open their eyes and see what’s in front of them?

It was then time to head for home, and as we passed under yet another bridge—this one forcing the small river to turn abruptly under it—there, in the concrete channel beneath, we saw a shoal of  shadows rush past. In barely a foot of water, we had finally found our chub, and dace as well. And was that a pair of gudgeon—hugging the bottom as they do, shuffling along, facing the current, letting it carry them for a while before settling back down, face into the flow—surely my eyes deceived me? 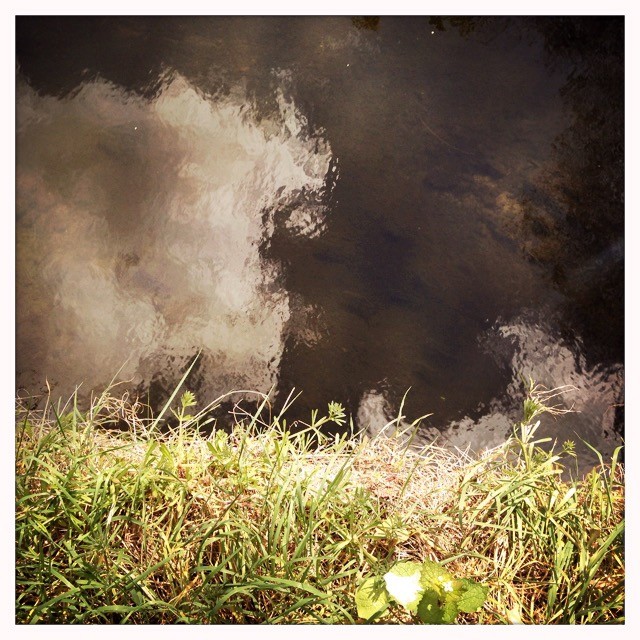 Not big fish, but numerous, they scattered from our silhouettes, the little ones first but gradually increasing in size until the bigger chub showed at over a pound. They hadn’t been lying in a deep pool under a willow tree, or nosing around in a far-bank glide. They were instead sunning themselves against the concrete wall, right under the noses of dog walkers, joggers, cyclists, and some guy flying his remote controlled drone. All those urban people, getting on with their urban lives, were oblivious to the life swimming in this gorgeous little river. Bring on June 16th, when a tiny stick float fishing maggots might tempt them, or perhaps even a small fly, cast in the evening light. What a feeling that would be, with the throng of Lewisham and Catford within earshot, and the sirens and car horns competing with the sound of flowing water and the clutch of a centrepin reel. Glorious.

Tired of London? Not a chance.

BB
Waiter, there’s a cormorant in my soup!