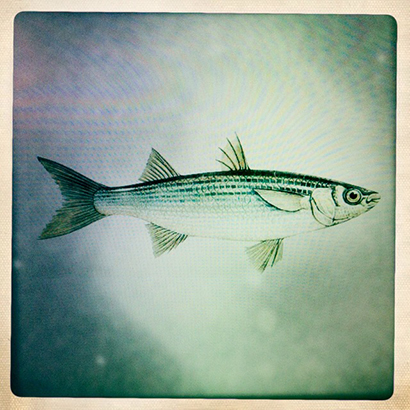 Though often regarded as a single species, the ‘grey’ mullet found in British waters is either thick-lipped (Chelon labrosus) or thin-lipped (Liza ramada). To add to the confusion, there is also the golden grey mullet (Liza aurata) which is related closer, taxonomically speaking at least, to the thin-lipped than the thin-lipped is to the thick-lipped, but is smaller and less frequent than both.

(That carp-driven headache (see Fish we Like) is beginning to thump again, so let us disregard the golden grey and speak of the thick and thin-lipped as one.)

Mullet are migratory fish, moving into shallow, inshore waters as temperatures rise in order to breed. They can often be spotted in harbours or estuaries, and have an amazing tolerance to freshwater, sometimes moving deep inland.

Mullet have a varied diet, and will filter feed or scavenge and munch on marine vegetation and algae—their unfussy palette does not make them easy to catch, though. Anglers targeting mullet require enormous patience, and often adapt methods more familiar to coarse fishing in order to fool them. Once hooked, the mullet fights as hard as any fish, stripping 100 yards of line on a single run and making the frustration worth every minute.