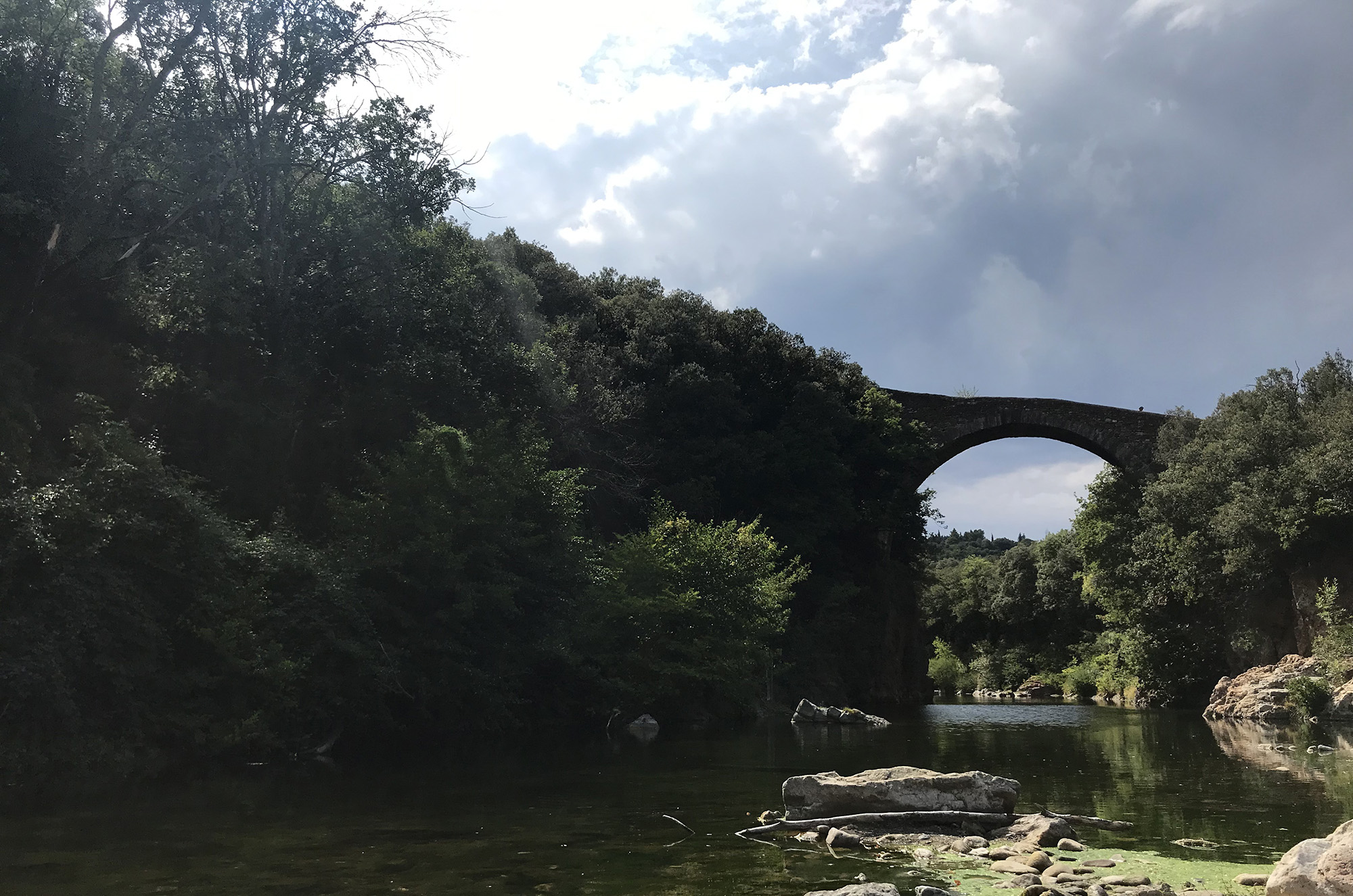 A river in the south of France leaves a lasting impression on Garrett Fallon.

After weeks of lockdown, my fishing season is drifting slowly into focus as a punt might emerge from the mist, gently nudged along by a benevolent breeze. With relief, I’ll soon be casting a line again, but regardless of this enthusiasm, I am finding it difficult to focus. I know where I am going to fish, but my mind has found its way to somewhere else. I realise that I’ll be sticking to these shores for a few months yet, but when I close my eyes, I’m in the south of France, on the banks of a river whose identity I shall keep to myself.

It started when I went canoeing. Being on the river was the closest I could get to the wilder parts of it. The water was low, the sun high and hot, the land parched. But we were up in the hills, embraced by the breeze, and we followed the river as it wound its way down through a wooded valley, rushing over rapids where the rocks—normally hidden–were revealed in the lower water, making navigation all the harder. The flow was diminished, but still purposeful enough to empty me out of my canoe more then once, each time clambering back in with all the grace of a roller-skating walrus, and all the while hounded by a scorching sun. I felt chastised, as though the river was punishing me for trying to take a shortcut to its secrets.

And finally, thankfully, it was over. Five kilometres of torture came to a subdued end as the river calmed down and flowed gently towards a high bridge, marking a finishing line that could not have been more welcome if it had been made out of ice cold beer handed to me by Sylvia Syms herself. Battered, bruised, cut and drenched, I emerged from the water pathetically, impressing nobody, but I didn’t care, and the broad smile I wore was not because I was relieved to still be alive, but because I had seen so many fish. Just after the start line, I passed some anglers legering into a pool, so the signs were good. Then I certainly saw chub, and roach. There were trout too. I might have seen a carp, but couldn’t be sure, but as I drifted close to the bank on a quieter stretch and passed over a large patch of gravel, a huge fish turned quickly, kicking up the bottom with its tail, and blinding me with the flash of sun against its golden flank. Was that a barbel? Surely not.

That evening, I sat on a balcony listening to a cacophony of crickets, and watched moths the size of sparrows flutter under the farm lights. Something on the floor caught my eye and I had just enough time to move my bare foot out of the way before a scorpion crawled over it. We could hear the snuffling of boar in the undergrowth at the edge of the field, but could not see them. My perception of France was being challenged and I was hunting for surprises. As a wise traveller once said, it was like being in a different country.

Being abroad is good for the soul because you can allow yourself to leave the normal rules behind. Things are reliably different, which is part of the reason to go in the first place, but there can be just enough familiarity so that you know which way is up. France isn’t a million miles away, so it’s not like looking for fish on the dark side of the moon, but I couldn’t be sure what I was seeing, and therefore, whether I could believe my eyes. I could, for a few days at least, dispel reality, and let my mind race ahead before I tried to take the fun out of it by applying logic.

We traced the river up into the hills and found a swimming hole where water sprang out from a cliff face and joined the main flow, creating a deep pool. I saw one flash, then another, then I ripped some bread from my baguette and sent tiny pieces into the shallows. First gudgeon, then roach, chub, then a barbel were feeding by my feet. But these barbel were small, in perfect keeping with the diminutive nature of the river in those earlier stages of its journey.

Over the next few days we pushed on downstream, following the river as its shape gradually changed with the landscape. We picnicked under pines, chased frogs in marooned puddles and regularly spotted barbel and chub, taking up home in the larger pools between shallower stretches, where (I guess) they’d stay until the next rains allowed them to move. They were often easy to spot because they weren’t behaving like the barbel I know, and could be seen higher up the water column, actively patrolling the pools looking for food, perhaps because the slow current wasn’t washing everything to them as a torrent might. Their meals weren’t being delivered to them on a plate. It was fascinating to watch. And slowly but increasingly, I wished I’d packed a rod into my suitcase.

On our last day, we completed our journey along the river by following it all the way to a small hydroelectric dam, which created a reservoir above and a wide, churning pool below. While my family swam, I explored. The reservoir was quiet, the trees bringing you right to the edge, shading the angler who could park their van in the woodland for the small price of a day ticket. The remains of fires, carefully extinguished, pockmarked the shore. But the national holidays were over and only the tyre tracks and ash remained. It was gentle and serene, and I thought of carp when I looked at it. But below the dam was another story.

Despite being far from full strength, the river still thundered into the pool as it descended from the dam. As I had explored, the barbel got bigger as the river grew. How big would they be here? It was ideal habitat, as far as I could work out. The pool was deep and the current strong, and it pushed to the near bank where it undercut the rock and raced up a shelf onto flatter gravel. The bottom wasn’t easy to find, even though it was directly beneath me, because it was simply so far away. The sun too, high in the sky, was playing tricks with my eyes as it reflected off the rippling water. But slowly I was accustoming to it. Then I saw them, hugging the bottom, behaving as barbel do with their heads pointing into the current as the river delivers their meals to them on a plate. I tried to take a picture of them with my phone, but all I got was two barely discernible shapes, viewed down a 15 foot drop, and into that again of water. It was impossible to get an accurate sense of scale. But with my polaroid glasses, I could see them clearly, and knew how big they were. The only problem being that I didn’t know how to believe my eyes.