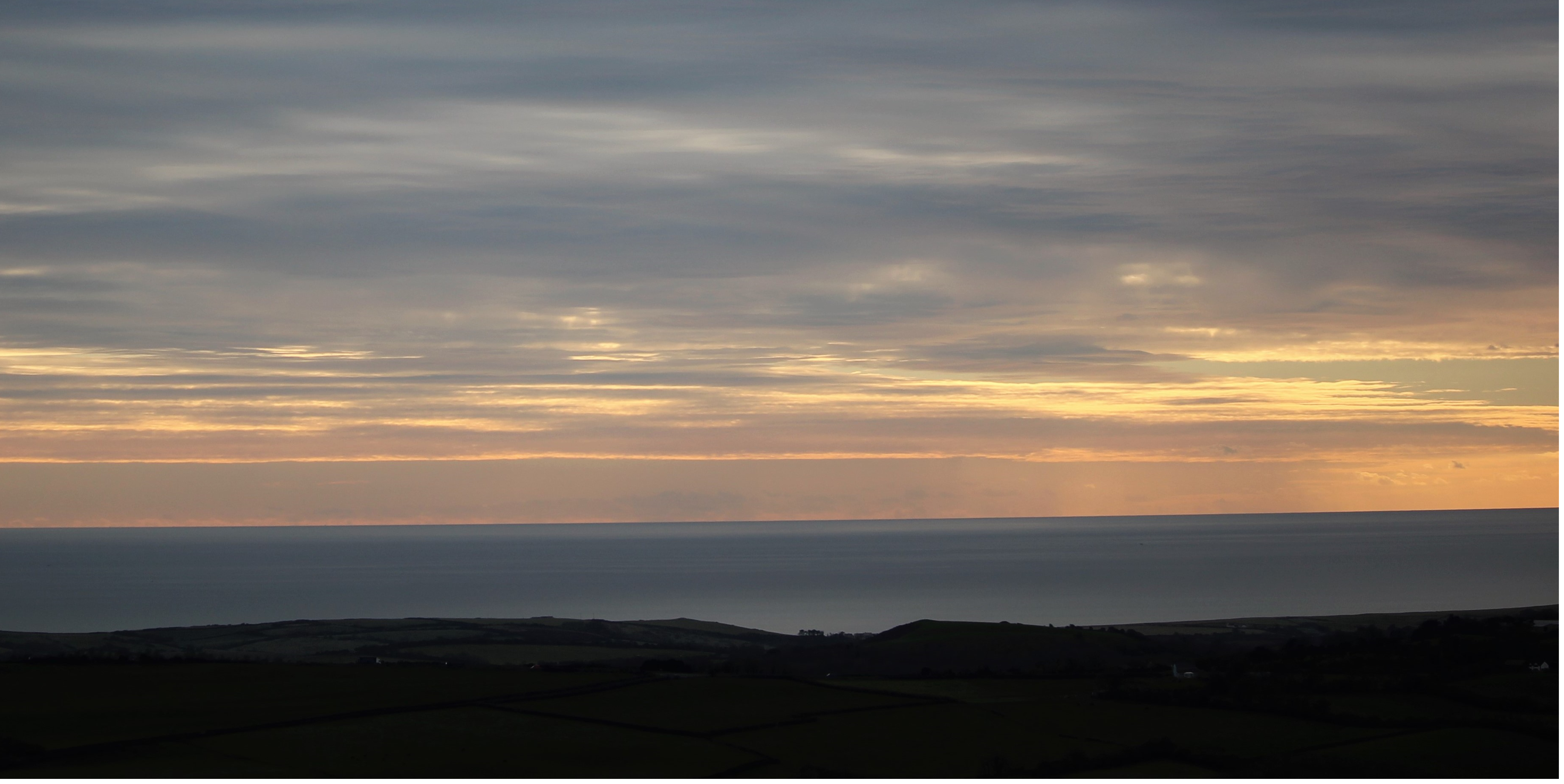 The heat has been relentless. July passed with barely a drop of rain and in response the earth shrank, the lawn cracked and the grass dried to dust. I looked upon familiar views with a new perspective. A blanket of brown and yellow, where even the trees struggled to splash any green. I was reminded of the snows of late winter and the smother of a single tone.

It has been too hot to fish – or even think about fishing. Well, almost…

I have been keeping a wary eye on the lake below our cottage. The spring has maintained, but nevertheless the water level has dropped and in the sultriness of early evening, hordes of roach supped the surface for extra oxygen. I wasn’t sure quite what I could do if things worsened, and fortunately did not have to find out. The temperatures remained high, but the southerly breeze was stiff and the water steadily swirled in response. The duckweed, which had threatened suffocation, was blustered into submission and the carp bubbled apparently untroubled through the heat. 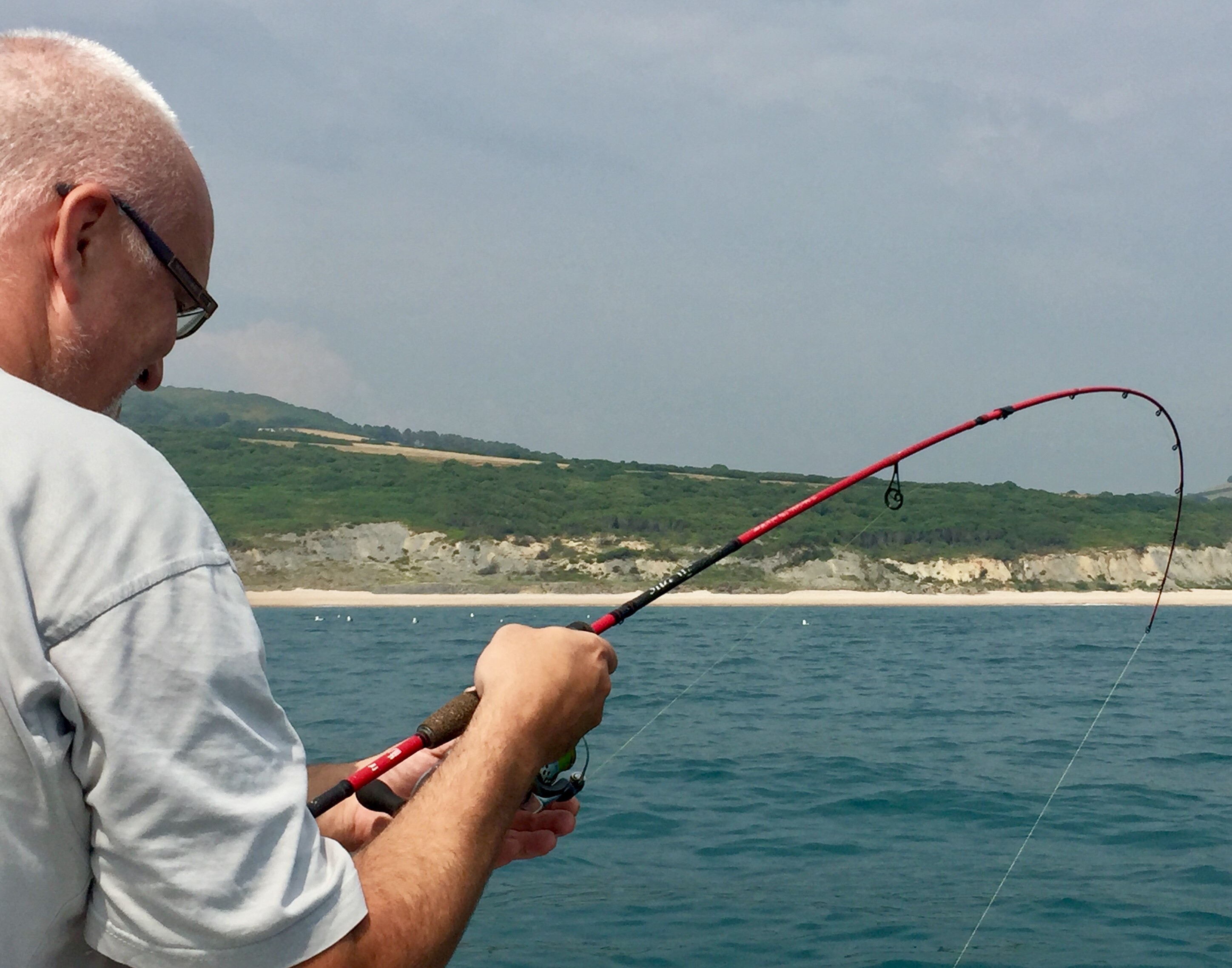 I also kept an eye on my local tench lake which is fed by a succession of chalk filtered springs. The water temperature retains the consistency of a chalkstream through the bulk of the year, but the increased sunlight and warmth had encouraged a surge of weedgrowth and algal bloom, and even though I could have fished, I felt no urge to.

As it happened, July’s fishing highlight arrived through a moment of pleasant serendipity. The car was due in for an MOT and on the morning of the test I made a call to Matt, the mechanic, who was due to do the necessaries. But instead I mistakenly phoned another Matt who greeted my early morning call with a surprised, ‘we were just talking about you!’.

It turned out that this Matt was with Chris and just about to launch his RIB in search of bass. The sea was flat and the sky cloudless and he was confident of finding a fish or two. I wished them well but cut short the conversation to call Mechanic Matt and sort out the car. As ever, MOT today had loomed like a visit to the dentist, but although the car inevitably failed, the cost to get it through was less than I had feared.

More importantly, it was finished by lunchtime, and having collected it I gave Bass Matt another call to see how they had got on. It turned out they were still fishing and had both caught bass. Moreover, they were fairly local and I was ten minutes drive away from a beach where they could pick me up.

The bass is a species that has long eluded me. In truth, I haven’t spent too many hours fishing for them, despite now living almost within sight of the Sea. I have hooked one before, a fish that grabbed a mackerel that I had feathered from Chesil beach, and Matt had previously taken me out for a cast afloat. On that day, the weather hadn’t been particularly kind, with low visibility and a persistent offshore breeze rocking up a steady swell. I was okay until I looked down just as a rogue wave clobbered us and sent my head spinning. In a moment the horizon seemed to blur and soon I was craving solid land.

Memories of that experience were playing on my mind as Matt pushed us off the beach, but calmer conditions, and excited chat about Chris and Matt’s morning afloat, proved perfect distraction. Chris had caught a six and a half pounder, while Matt had managed three fish (or was it four?) to a similar size. They hadn’t been going crazy, but the bass had stirred sufficiently to keep Matt and Chris wholly engaged. 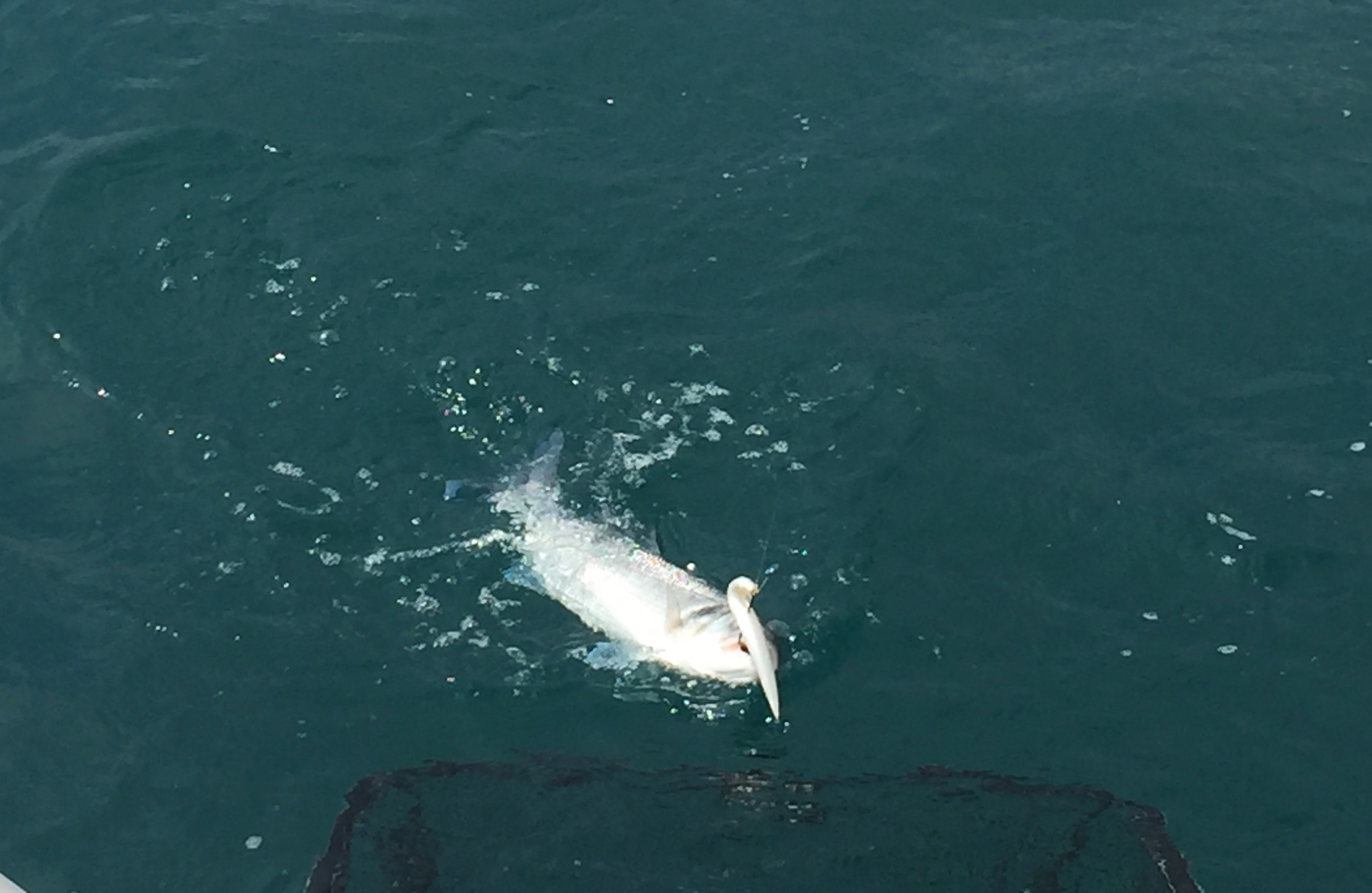 Matt motored us a quarter of a mile off shore before spotting a frenzy of gulls around half a mile west. Chris shifted to the stern to give the bow a bit more clearance and I clung to the painter as Matt opened up the engine. Any lingering concerns of seasickness were flushed by a bolt of adrenaline. This was a race against time and tide.

The action was distant and the birds already beginning to settle. The ball of baitfish seemingly scattered. Matt felt confident that the bass wouldn’t be far away though, and he worked us up-tide of the area to drift back down.

I was using Matt’s rod (on his insistence), while Chris was working a favourite surface popping lure. We began casting but were soon distracted by a stirring of gulls a couple of hundred yards towards the shore. Again, Matt was quick to react but again the flurry was brief. As we watched, a single bass broke surface and Chris and I were soon casting towards the spot. Chris’ reel spun to create an impossible tangle, which took Chris and Matt several minutes to sort, leaving me to cast unhindered.

I found a vague rhythm, and was enjoying the process even though I had yet to make contact. The conversation flowed and I had just embarked on a rant about some recent political wrangle (cant recall exactly what, but there is plenty of silliness to choose from), when the line jagged and I was attached to a fish. I took it gently, aware that another chance might not be soon coming, and the bass, though small, gave a great demonstration of its power. At one point, it dragged the rod-tip below the surface and pulled the bow through ninety degrees, but was soon subdued and suddenly I was a bona fide bass angler. 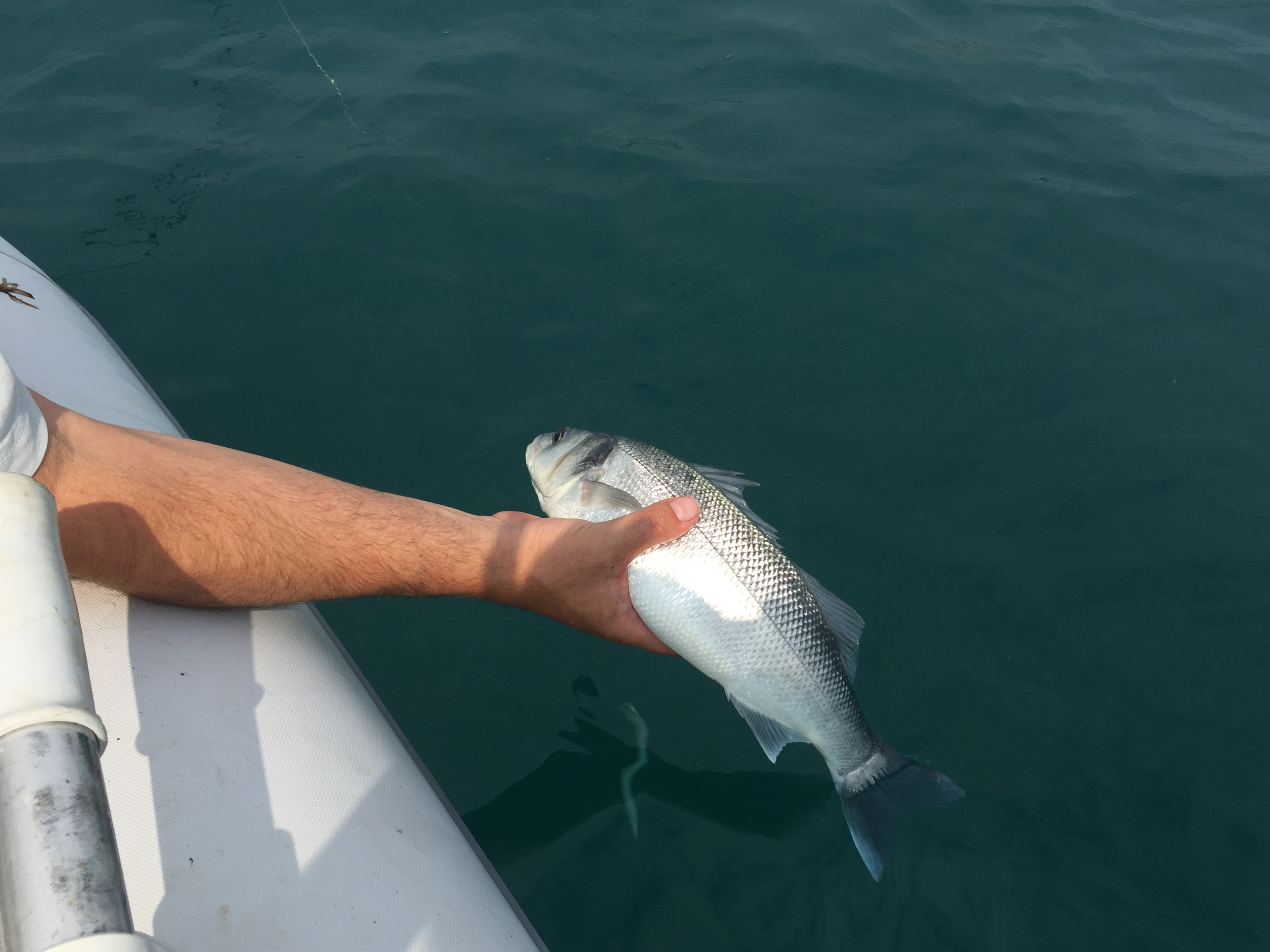 It was a perfect first bass. Only a couple of pounds in weight, but heavy enough to put a decent bend in the rod while leave me wondering what a six or seven pounder would feel like. And then, perhaps, something bigger still…..

Thanks to Chris, and especially Matt who took the photos and delivered me back to the beach with plenty of colour still in my cheeks. The quip to the holiday makers about people smuggling could have backfired, but I was back at home well before the Immigration Enforcement Officers could catch me…