By Garrett Fallon on October 14, 2014 in FALLON FISHES

I hit the road early but got gridlocked in the Blackwall tunnel, so was suitably late when turning up for my days fishing at Walthamstow reservoirs with the angling writer Dominic Garnett. Thank heavens patience is a virtue often found in the heart of an angler. Fallon’s Angler was launching the next day, and Dominic wanted to get to know the slightly crazy Irishman who had contacted him out of the blue some months beforehand with an idea for a literary fishing magazine. Similarly, I wanted to get to know the talented writer I had worked with, but had not yet met, who is equally at home pole fishing the canal as he is dry fly fishing for trout. “Where on earth does he get the time?” I have often wondered, and I had plenty of time to wonder some more, as I crawled the comparatively short distance from South East London to E17.

Dominic is one of the most talented angling writers in the UK today, make no mistake. He can fish any which way he chooses, and brings to the bank no small amount of skill and knowledge no matter which method or quarry he pursues. His prose is always crafted and well-informed, and he knows his possessive apostrophes from his paternoster rigs. His piece in the first issue of Fallon’s Angler, about fishing in Manhattan, is a wonderfully descriptive account of the strangeness of fishing in one of the world’s greatest cities. But today we were fishing in London, and were chasing pike. Dominic was on his way to the Pike Angling Convention in Coventry, and his car was awash with all manner of paraphernalia including an impressive array of his own hand-made pike flies. I was intrigued. I had never cast a fly for pike.

I can cast a fly for trout, but only just, methinks. It remains something I am determined to learn, and perhaps to master, if I am both diligent and dedicated enough. It was the disused local canal that first grabbed my attention as a lad, and tench and rudd were my quarry rather than the trout of the local river. But despite this, in my youth, I caught a good few brown trout, but all trolling with a wet fly while my Dad pumped the oars, so I’m not sure they even count. I’ve cast a fly in Scotland, years ago, for salmon, but instead caught a fine little brown trout, and got scolded by the gillie for not knocking the brash little fella over the head. I also had a lesson at Bewl reservoir with an interesting guide called David, who was kind about my inadequacies, so to speak, and I caught a lone rainbow from the depths, which I was instructed to cook in tinfoil and eat that very same day, despite the fact I don’t eat fish. It was delicious. And once, when fishing with my dear late Uncle Padraic, I caught another rainbow on the Kennet, that raced out from behind a rock and took the fly I had intended for one of the Kennet’s Greenbacks. It is hardly a hall of fame. But there’s a mile of difference between casting a wee little nymph and a mighty pike fly. So I courageously avoided it at first, not wanting to look a complete egit in front of my companion for the day, and instead settled for something far more familiar—a spinning rod.

Having quickly established that my own spinning rod wasn’t up to the job, I persuaded Dominic to lend me his—my rod could have cast a two-ounce lead across the Thames, so if I was determined to use it I needn’t have travelled at all, when I could have cast it from the comfort of my own living room, I reasoned—and like the cat that got the cream I sauntered off to start fishing with my confidence suitably misplaced. Suffice to say, Dominic’s was a proper rod, and he trusted me with it willingly. We fished our way around Upper and Lower Maynard reservoirs first, exploring every likely-looking bay, snag and inlet, searching for any esox at all, chatting as we went about our business. By jingo there were some pikey swims, but despite our early optimism, we remained fishless. 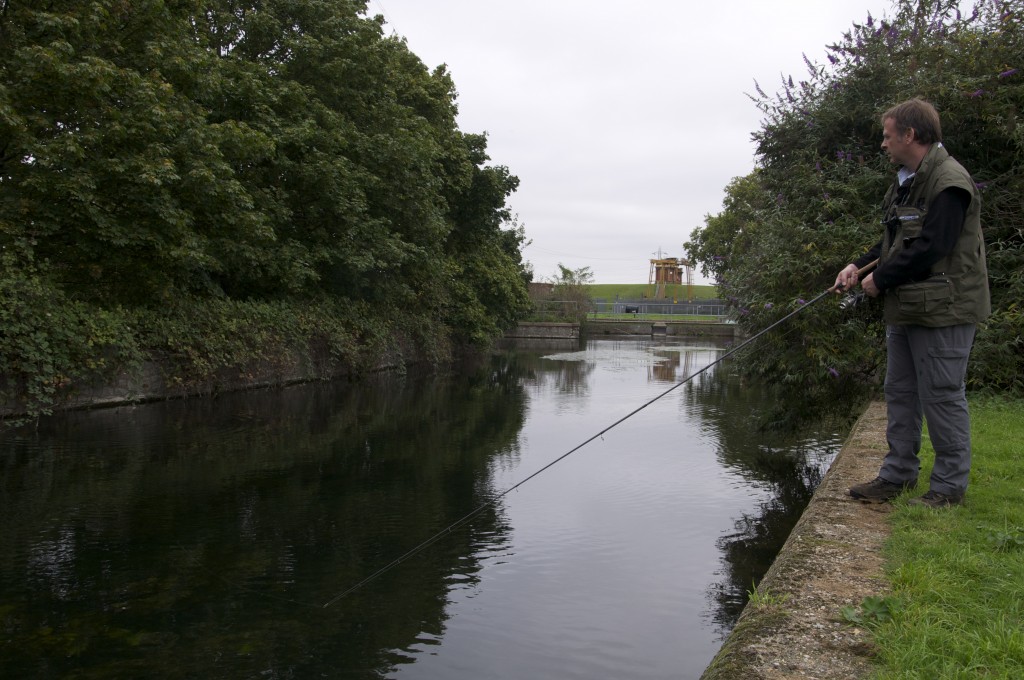 At one stage we passed the Coppermill Stream. What a beautiful looking water—crystal clear, with thick strands of weed waving and glistening in the current like the long hair of a mermaid. Not a fish in sight. And then we saw a broad-shouldered carp saunter into view, his purple back contrasting against the weed. We came to a big submerged outflow pipe where the current raced out from a higher pool, and in it we glimpsed a barbel, before it shot up the pipe and was gone. Bloody typical.  Coarse fish everywhere and not a predator in sight. For those few minutes we were joined by another Irishman, whose name I didn’t catch, but who swore he played drums with the Sawdoctors, and emigrated to the UK before they made it big. He swore a lot, come to think of it, and his especially colourful use of the term ‘feck’ and its derivatives “fecked and fecker” reminded me pleasantly of home.

Every now and again I’d stop spinning and watch Dominic cast a pike fly. There was effort and rhythm. He cast and worked the fly masterfully in the margins, skilfully dropping it into holes in the weeds or under the branch of a tree. His beautiful hand-made flies flittered and danced in the shallows, willing a pike to snatch at them. Watching them was making me hungry, and it made no sense at all that we remained fishless. 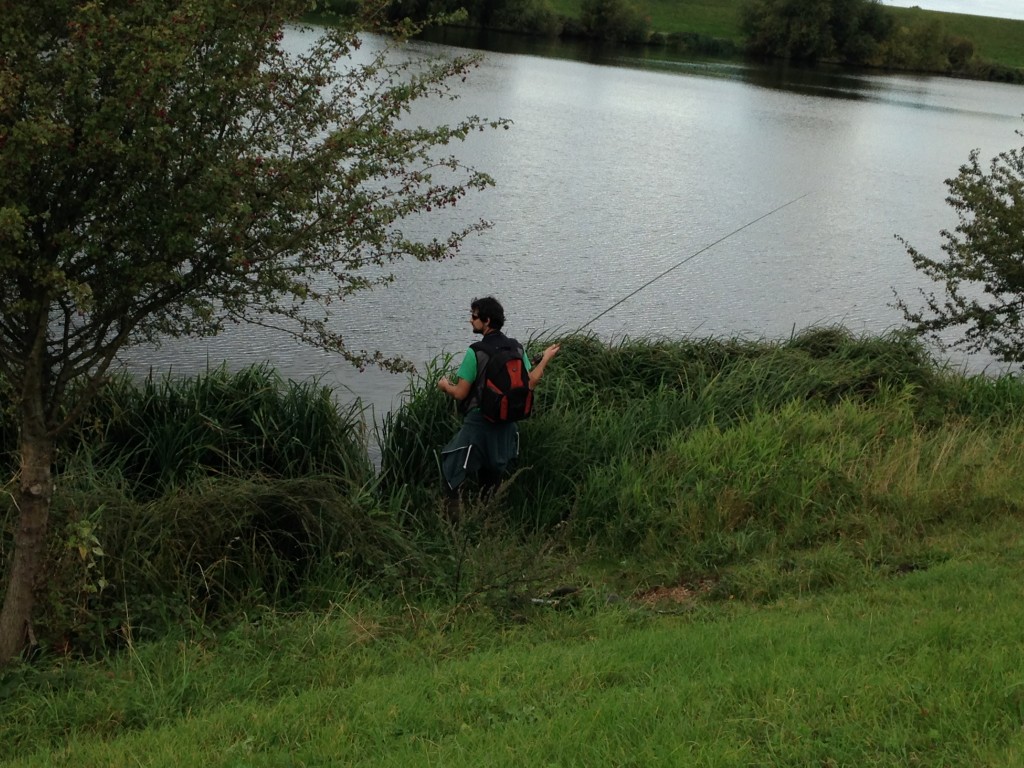 Dominic Garnett shows how to cast a pike fly. Photo by Garrett Fallon

A pub lunch saw us chat and stare into the Coppermill Stream, which was mysteriously devoid of fish, despite looking so alluring. We shared fish stories, and I was keen to learn more about Dominic’s many notable achievements as an angler and a writer. He has published three books: Canal Fishing: A Practical Guide, Fishing for Dummies and Fly Fishing for Coarse Fish, all selling well and establishing him as one of the best young angling writers in the country. Then we traded pike stories, with my own personal best falling short of Dominic’s magnificent 27lb fish caught with an Alex Prouse special. Suitably fed and watered, we moved on to try our luck in reservoirs one and two.

There were quite a few anglers on the banks, but the water was very coloured. As we walked further and further we heard more and more stories about how bad the fishing was. I got distracted by the site of two young people clad in white flowing garments, as they each took position on the end of a fishing platform and stood with their arms outstretched towards the water, but silently. It looked a little strange to me, not quite fishing at all. I hadn’t a clue what they were doing, but this is London. Suffice to say they didn’t catch anything, and I then figured if we weren’t going to catch either, then I may as well NOT catch with a fly, so over the next couple of hours I did my best to lose one of Dominic’s fine perch patterns, to add to the lovely lure I left somewhere in a tree on Lower Maynard. I may not be great at catching fish on the fly, but I can certainly catch foliage, at one stage needing to climb through a thicket (maybe so called because the wall of brambles and briars is so ‘thick’) and half-way up a tree to save my lovely fly, which was chosen as it had the same colours as the Irish flag. At least I was getting exercise.

As the day was drawing to a close, the colour of the water had darkened from brown to a seemingly lifeless black and had beaten me. I’d need to fluke a fly just past a fish’s nose for it to see it. I’d say visibility in the thick coal soup of water was about 6 inches. Any fish down there were surely swimming into each other in the gloom. It must have been mayhem.

I was taking in the view when I looked into the trout reservoir behind, which was much clearer, and saw a fine fat rainbow patrolling the margins. We had arranged for a two-fish ticket, so I cast my ridiculously over-sized pike fly. I was simply glad to cast at a fish, despite the fact I was more likely to send it fleeing into the depths than hook it. But it stayed in the area, and then there were more, and soon enough, as Dominic joined me, we had a dozen or so around us before they moved on. But how would we catch them? Well, thank heavens for the tendency of anglers to be slightly less than tidy. The answer was hooked into Dominic’s vest, where lay two scruffy little trout lures. And so the fun began.

About ten yards out the rainbows were going crazy, feeding voraciously on the hatch of some insect or other. Dominic caught first (then again) as I struggled to get the distance on my cast, but every hundredth cast or so I’d get it right, and out the fly zipped. As I stripped the line I saw a little bow wave appear behind it and WHAM! The ensuing tussle was great fun, and the fish gave a very good account of itself. It was a fat little rainbow, that had waited five minutes before I had to leave to show its true colours. Wonderful. 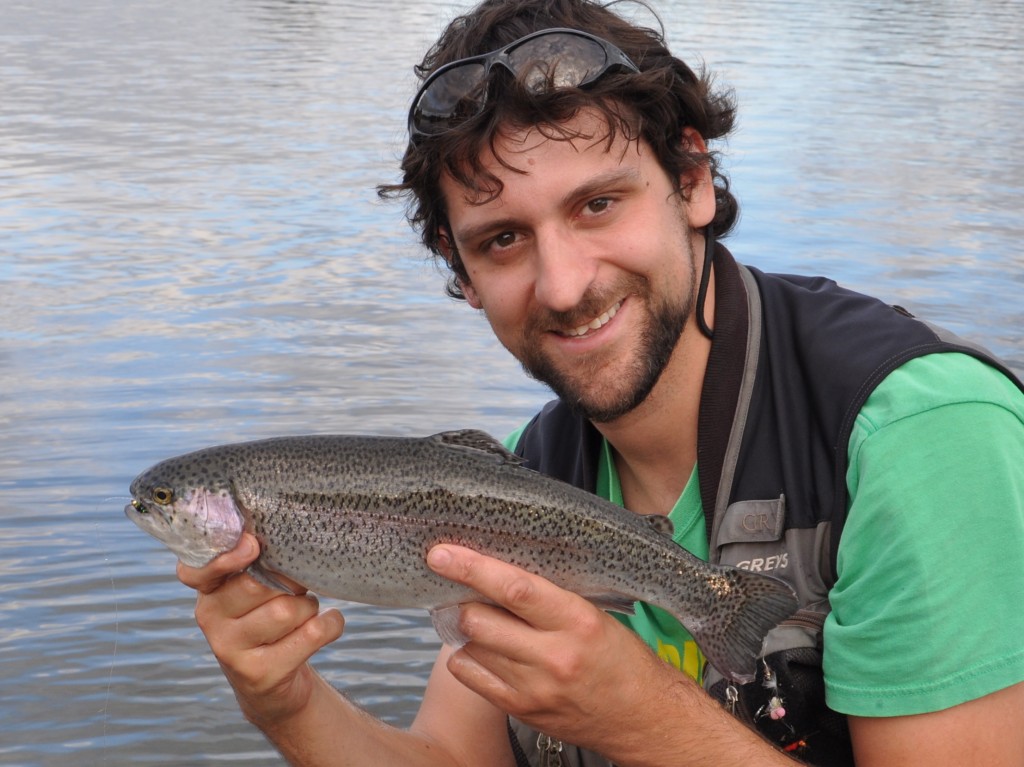 His fish is bigger than mine, but at last a fish! Photo by Garrett Fallon 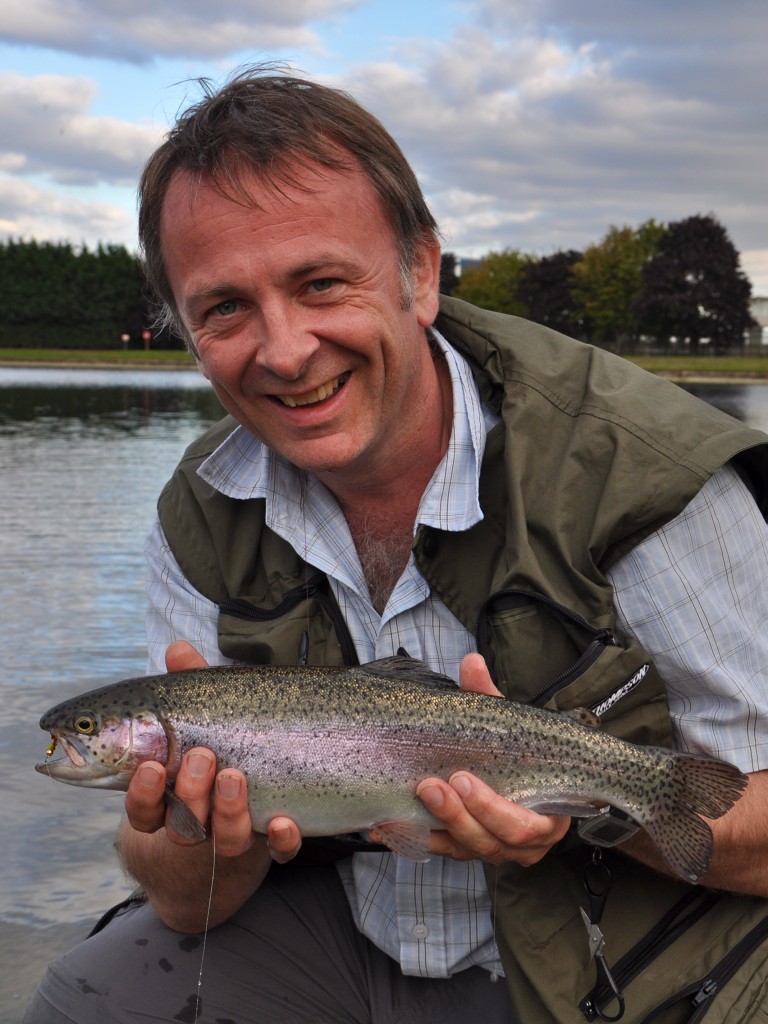 My first fish caught on my new fly rod. Photo by Dominic Garnett

As we made our way back to the car park the mood was buoyant. Whatever people may think of rainbow trout, I was delighted to catch that chubby little fish that day, and I shall be back. I was also delighted to finally meet Dominic, and we said our goodbyes as he departed for Coventry, and I sat in my car with my signed copy of Canal Fishing: A Practical Guide. Back where it all began.