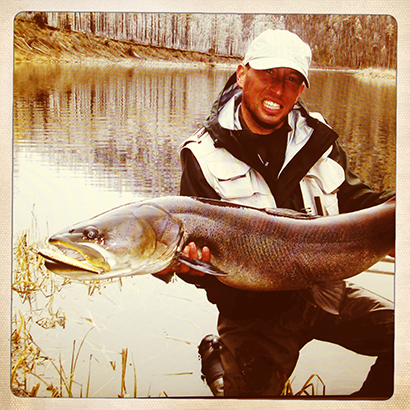 Imagine the picture of Miss Ballantyne with her record 64lb salmon. Now consider a fish twice as big – that hasn’t nipped off downstream to get fat on a seafood diet. Surely no such Salmonidae exists? Well, maybe not in the Tay but in the rivers of Russia and Mongolia swims a true giant.

The taimen (Hucho taimen) is a fish in decline, but it still conjures images of monstrous majesty. They are fierce predators that can live for more than half a century, and in this time they grow huge. A fish weighing 231lb and measuring 8 feet in length was reputedly caught in 1943, though Mongolian legend talks of even bigger specimens. This great size means they are sparsely populated, a fact that leaves them vulnerable. Over fishing has devastating consequences – as witnessed in China where the taimen is likely extinct. It would be tragic if we lost such a fish altogether.