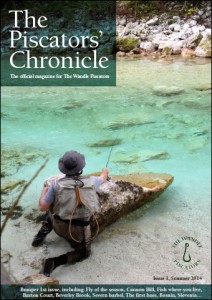 The Wandle Piscators, and angling club in London of which I am a member, has launched it’s own club e-zine, The Piscators’ Chronicle

The Wandle Piscators is involved in the protection of both habitat and the fish for the good of all, not just anglers.

Founded in 2004, the Club was formally constituted on 21 October 2005—the 200th anniversary of the Battle of Trafalgar and the death of Admiral Nelson, reputedly one of the Wandle’s most famous fishermen (although there’s no actual evidence that he ever fished the river!).

Today, we’re committed to helping this historic urban chalkstream come back from centuries of pollution and abuse, and at least one writer has described the Wandle’s recovery as “a modern miracle”.

If you feel your club or your project deserves a mention, please drop me a line and I’ll see if we can help bring it to the attention of a wider audience.