Where can you get a conker match, a cello recital and a crack at a double-figure barbel?   Well, I don’t know where or when they might occur together again, but on a recent weekend at Llanthomas, where The Sheringham Society held its Autumnal Equinox Meet—dedicated to the memory of a recently departed member—we had them all.

The conkers were the fruit of trees planted by Capability Brown, the cellist a member of the Welsh National Orchestra and the barbel courtesy of our host, Geoff Maynard.  Hang on, read that as the opportunity to fish for barbel courtesy of…    The weather and the Wye had seemingly not been consulted.  Very wet nights and a rising river made the fishing a gesture, a sacrifice to the River God of a wide variety of baits and one or two ledger rigs. Each.

Most arrived on the Friday, walked the beat to view the pools and runs and some of the more optimistic fished while others stayed with the tea-kettle,  improving conversation and choosing weapons for the first round of the conker tournament.

On Saturday all fished.  Four of us lined up along the bank of The Larder, the pool so called because in the days of the Wye’s greatness as a salmon river it held immense numbers.  It still holds salmon but, as everywhere else, one must work harder for them.  A brick just might have held bottom but no ledger that a cane barbel rod can manage had a prayer, and wherever tackle was cast it ended up under the bank at one’s feet.  A very sociable pitch this—as it was on the route between several others—and those changing location often stopped to exchange intelligence and share the dramatic diversion of watching huge chunks of the sheer bank opposite collapse into the river.  The Wye in a couple of years could be a field away from where we sat; its name, after all, means The Wanderer.

Lunchtime, cake etc., first heats of conker match.  Interim leader emerged with a niner and, from the missed shots, a bruise on the elbow about the size and colour of an oyster.

Saturday night supper and Society AGM were at the Radnor Arms where some members were staying.  It might well be questioned how a body with no rules and no officers can hold an orderly meeting with no agenda, no speeches, debates or votes and GMs are not necessarily A.  It works though, and has for twenty years; some say twenty-one but, unsurprisingly, there are no formal records.  The fact that there is always consensus on matters of importance says much for how well matched are the members. As fishing companions, that is. Otherwise the membership is as diverse as possible, coming from widely differing occupations, each present having travelled from a different county, some who cross oceans to be there and others who struggle with the culture shock north of Watford. 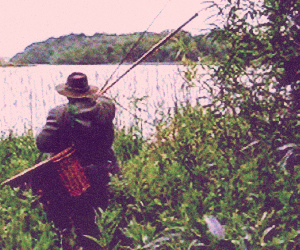 What brings them together on such occasions and keeps them in touch in between?   Undoubtedly, a shared attitude to fishing which is much removed from rods that have names like action movies and reels more intelligent than their owners.  Here is an educated preference for cane and a proper appreciation of centre pins.  There is an insouciance about their angling and a willingness to fish for everything that swims, from which is absent the intensity of species specialization.

Sunday.  Changes of pitch, changes in techniques, little change in expectations.  Some dace were reported.   Luncheon.  Arrival of a gal with a big fiddle.  This was Sonia Hammond who played to a garden of silenced and thoughtful fishermen.

Rowdiness returned with the conker final.  The winner went away with a fourteener that should probably have been set up and displayed in the Society’s headquarters.  But there is no such place.  And the Sheringham Society has no home water.  It is angling’s I Zingari.   Though fixtures are few a roving angler might encounter a member on any number of river banks and lake shores and, each recognizing like-mindedness, thereafter meet them collectively.

It has been observed that the measure of an angler is not by how many fish he catches nor even by what means he catches them; rather, it is by what he brings away from the water on the days he catches no fish.  Discuss.