By Garrett Fallon on December 22, 2014 in FALLON FISHES 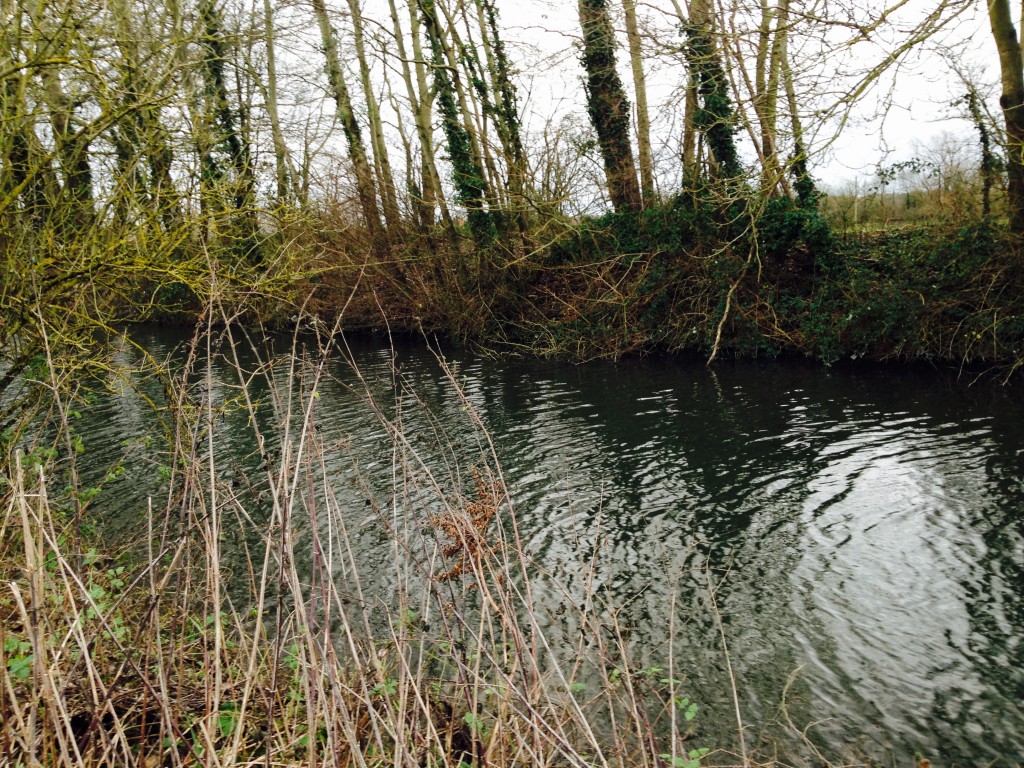 For as long as I’ve fished, I’ve wanted to catch a big perch. I caught a lot of stripeys when I was young, from the rivers and canals around my home in Ireland, but they were all small fish, with nothing much over a pound. The closest I came to snaffling a monster was finding a dead one under a bridge on the River Deel. It had been stuck in a weed rack for some time, and was badly decomposed, but it still weighed nearly three pounds, and was so rancid we couldn’t even pretend we’d caught it.

Thinking back, we didn’t respond as we should have. There was no expedition in search of its monster brethren. Where had that fish come from? It could have floated down the river for miles. Beyond the narrow confines of a 10-year old—where our world ended three fields away—was the great unknown; a land of bulls, wild dogs and shotgun-toting farmers with a disliking for trespassers. Nobody had ever seen a perch that size, let alone caught one, yet there it lay, like a beached whale appearing belly up in your garden pond.

So nearly 35 years later I was getting my chance to catch my own leviathan. On Sunday, I fished as the guest of Will Barnard, who kindly invited me to a canalised stretch of the Kennet. Canals are familiar to me, and the Kennet didn’t disappoint, with lots of overhanging branches on the far side. It had more than a heavy dose of “fishy”, despite showing signs of being clasped in the cold fingers of Winter. A chilly wind remained a distracting companion, and cajoled a light ripple to dance across the canal in tandem with the slight flow. While in front of our eyes our fishing line ran the gauntlet of canoeists and barges—like playing football on the street, stopping to let the cars past—the towpath behind us flowed with a constant stream of dog-walkers, ramblers, cross-country runners and mountain bikers. To avoid unsavoury accusations of perversion, one had to time it perfectly to answer the call of nature, or risk being caught midstream by a stranger.

There was a December greyness to everything, a lack of colour that played tricks on the eyes, and I’d occasionally look up from the float to see the wooded far bank sway momentarily, a fishing head-rush. My gaze occasionally diverted to hares and rabbits in the undergrowth, while a majestic kite flew overhead, searching for its next meal. In between the traffic I was lost in time. It was beautiful.

Despite the conditions, Will wore no hat or gloves, seemingly immune to the cold, his more frequent fishing exploits acclimatising him, while there I huddled, wrapped up like a wee bairn, embarrassed by my blood temperature. He was a fisherman, I was a fisher-softy.

But Will Barnard is some fisherman. I learned about amino acids, mole hills, haemoglobin, fluorocarbon, fishing on the shelf, laying on, the pros and cons of barbed versus barbless hooks, drop-shotting, jigging, air injection, popping up, and much, much more. He was innovative, intuitive, brilliant. In between the advice, he kept me entertained with an array of hilarious jokes and stories, mostly too rude to share. You had to be there.

I also learned about his fine work as angling development co-ordinator with Thames Water, and the fisheries at Walthamstowe and Farmoor, and his role as a brand ambassador for Bait-Tech. I am curious about the relationship between angler and sponsor—is it a modern oddity? It is certainly a competitive market. But every cause needs its champion.

Laying on with a swan shot is good fun, but for me, the cast quickly becomes this grapple between two spinning objects, of different aerodynamics, making their way towards roughly the same place, attached (essentially) by a piece of string. They want to behave differently, but are joined at the hip, and fight against each other on their journey, like two drunk brothers trying to get to the bar.

Despite the physics, I was aiming as close to the far side vegetation as possible, so I went kamikaze, and somehow landed the float and bait on a sixpence, right under branches, on the nose, bang on the money.

The float moved, the bail arm was opened as I lifted the rod into the striking position (Will’s advice: don’t increase the tension to a fish already chomping on its dinner), the bail arm is closed again, then BANG. I’m into my first big perch.

It feels nice, but strangely familiar. After a short fight, I see a shape in the water that is long—not stocky—then the captive reveals itself to be a hungry little pike, not the intended quarry. Still, he is a pretty little fellow, with wonderful coloration, particularly towards the tail where he has the markings of a tiger. I am encouraged nevertheless. 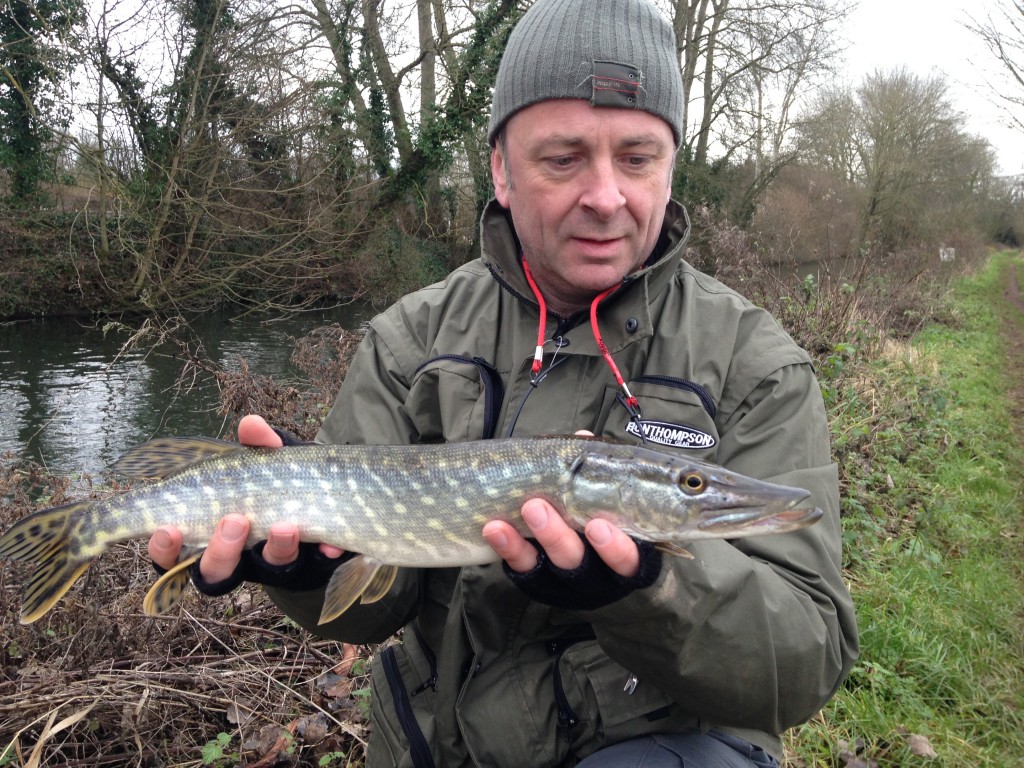 An unexpected, but welcome, guest

The day is passing quickly. While Will is drop-shotting further along, searching for signs of life, I open my lunch and tuck in, and just as I think the float starts bobbing and weaving, I hear a snuffling sound and look down to see a chocolate Labrador eating the rest of my sandwich. F•cker. I love dogs, but what can you say? The owner apologises. “I’m really sorry. I’m so, so sorry. I’m terribly sorry.” I still don’t know what to say: “Oh, well I hope he likes cheese.” I take my flask from my bag for a warming cup of tea instead. But it is cold. What the hell?

We move swim. Having perfected my casting, I get cocky and hook the branch of a tree. Perhaps starvation is ruining my aim? The line snaps at a weak point near the reel (lucky we hadn’t hooked a big fish). The float dangles, taunting me. That was my favourite float, dammit. A barge goes by. The pilot seems stoned, and doesn’t see the line trail its way over his vessel until it and the float still attached flash past his ear.

Three canoeists then paddle past, and the taunting line surprises one of them. It’s ok, it’s not attached to either an angler, a rod or a fish, just a tree, and only at one end. It’s a decoration, an offer to the angling gods, a sacrifice to catch a big perch. We move again.

It’s getting late in the day and darkness is closing in. Time is running out. We’re now fishing in front of a reed bed, the float highlighted against the reflection of the muted green behind and the sky above. There is action. But I snatch at the strike and miss it. I am clumsy. Six hours, one chance, and I fluff it. “You feckin egit!!” I try to remain optimistic and recast. I get another bite, and miss that. Two chances and I miss them both (I’d never make it as a gunslinger). Too much line on the water drifting with the slight flow and the wind—schoolboy error. “Jesus Christ on a crutch. Come on Fallon, you can do better than this.” I’m on the stage but I’m fluffing my lines. All things are conspiring towards a grand finish. I’m overcoming obstacles so that I’ll enjoy the mighty triumph at the end. We’ve all been there. We know the signs.

Darkness is almost here and I can’t see my float. The starlights I have only fit the float that still hangs from a tree about 60 yards away. I painstakingly do a McGyver with some float rubbers and we’re in business, and in the dying light I cast into the magic, the witching hour, where fish go crazy and anything can happen. There is no splash, but a crash, as the line hits the hedge opposite. “Ah bollix.” We both burst out laughing.

After the inevitable snap, I’m too blind to even consider running the line through the rings again, so we fish the feeder for the last half hour in the pitch black, and try to remain quiet while some unseen creature snuffles in the reeds to our side. I couldn’t catch that either, and the day draws to a close with promises of another session in the future to catch me my perch.

Still, I am a very happy angler. I drive back to London with a mindful of information, a new fishing friend, and a burning desire not to make such a tit of myself the next time. But I guess that’s that’s why they call it ‘fishing’, and not ‘catching’… 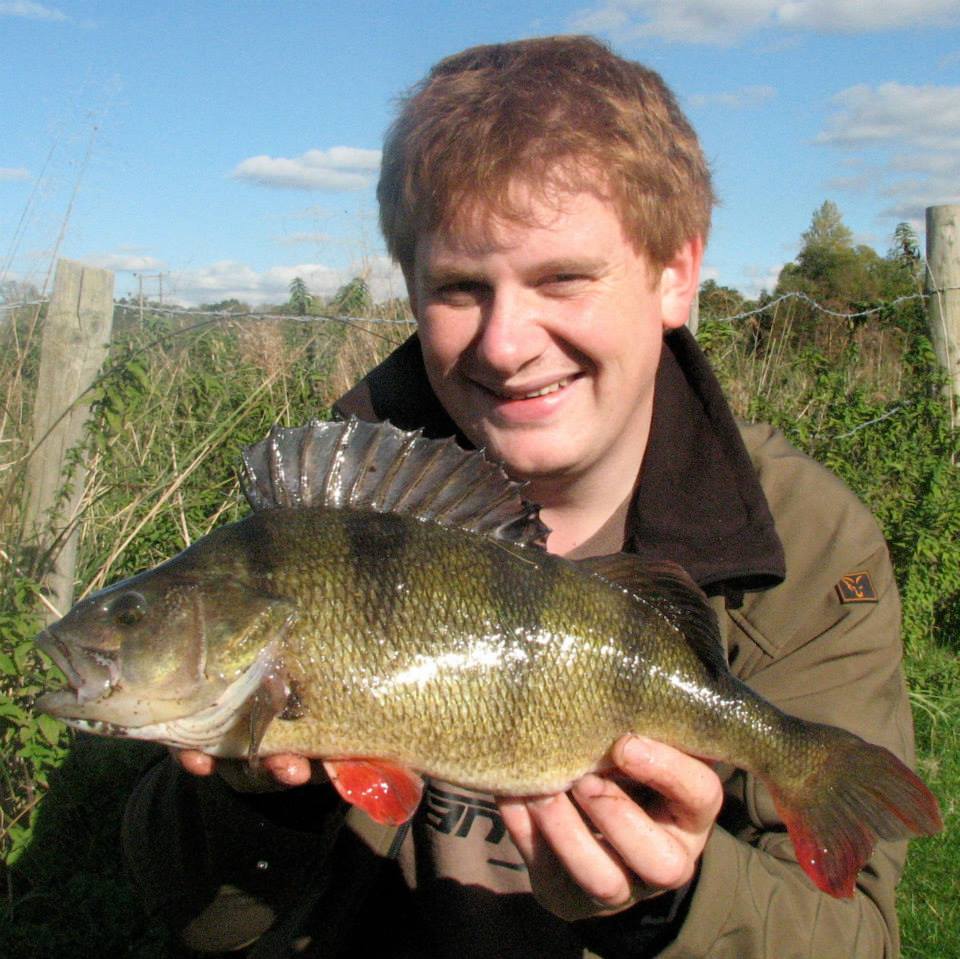 Will Barnard with a proper Kennet perch. I’ll just have to wait for another chance

Alan Broderick: FishTalk TV
A first trip to the Test