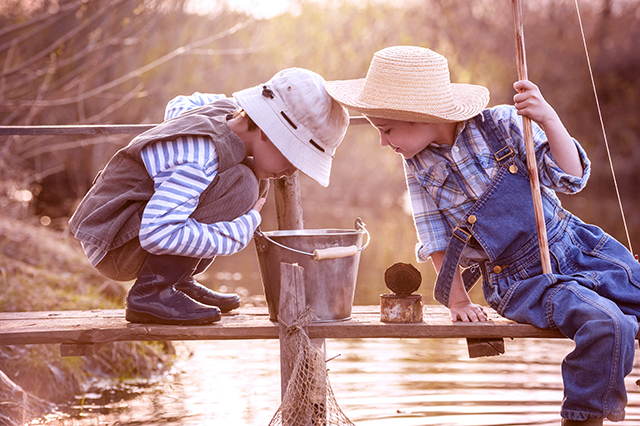 I have twin seven year old nephews, Tom and Fred. They are energetic dynamos, indefatigable creatures of havoc, as entertaining with their ludicrous antics as their devilish double act is testing to the patience of the most tolerant of adults.

A day with the prankish pair requires deep reserves of many attributes, most of which are normally beyond me. I must be patient, retain a sense of humour at all times, mind my language, and stop putting myself first. This was going to be difficult.

Were somebody to ask me what would I like to do on my day off, spending it fishing with my two nephews, and all the mayhem that implies, may seem like a peculiar thing to agree to. But that is exactly what I did on Father’s Day of this year.  It may be better fun sticking hot pins in my own eyes, or subjecting myself to an ammonia enema. But I was bound to a promise. And anyway, these are good lads, fun boys, curious about the wilder world. Surely it would be a breeze?

So we gathered at a small pond in deepest Kent. It is hidden quietly away behind fields of corn, past an ancient orchard, whose gnarled branches grasp outwardly like a tortured succubus—haunting, creepy, moody—before revealing a hobbit-sized hole in the ground, full of delicious, life-giving water. It is perfect for death-by-sufferance at the hands of a pair of impatient young whippersnappers.

The pond is so small you could skim a stone across it, but it is perfectly round and deep. It is fringed by lilies before the depth in the middle grows too much for them and the center of the surface remains uncluttered. When fishing it, I occasionally see WWII planes flying overhead, taking off from some hidden local airfield. What can they see of this pond? I always think It must look beautiful if viewed from above. They add to the timeless quality of the place. I imagine that Uncles have been taking their nephews to fish this spot for generations.

All around the water is alive with the jitters and jumps of small fish. There is a gap in the weeds about the size of a child’s paddling pool, which we will fish into. I understand the water reasonably well, though I haven’t yet managed to fully learn its language, but I know the proliferation of small quarry, relatively unmolested by angling pressure, make it a good venue especially for youngsters to catch.

Seven is a good age for a first foray into fishing. A child should have the dexterity to impale a maggot and cast a line, and enthusiasm for all things watery, scaled and slimy. Everything new is “cool”, “magic” and “awesome”. Any adult who can survive the experience may well find they recall it with that warm fuzzy feeling you get inside, when you know you’ve done something worthwhile that doesn’t involve the neighbours wife.

It makes a welcome change to see the world through young eyes again. If only we can experience that feeling a little more often. It is a shame if this sensation can only be found through vicarious means.

I quickly made up the groundbait, explaining its purpose, and introduced the boys to their first tub of maggots. The squirming mass was greeted with gasps of “Eeuuyyyewwwww”.  Then “”Oooohh.” They were amazed at the different colours, red, white (of course) but also blue and green. ”Do they hatch into red, white, blue or green flies than?” I couldn’t answer that one. Maggots and boys go together like pigs and mud. Add a small fishing catapult into the mix and you have utter carnage.

I quickly learned that when fishing with youngsters, especially more than one, that it is vitally important to set up the rods at home, rather than on the bank. Valuable time was lost, then multiplied by two, and patience to fish was already worn thin by the time the first line was cast.  By concentrating on one boy at a time, you also instantly create favouritism, jealousy, discord, and worse—boredom. I needed to multitask, something that I am often reminded is normally beyond me.

The pressure was immense. I felt like a charlatan. “I must get this right or they’ll surely realize I don’t know what I’m doing”, I thought. “I need to keep this simple so they’ll understand. I need to be patient. I need to think like a seven year old.” I sought solace in the fact I have never fully grown up.

I needn’t have worried about the fish playing ball. As soon as the bait hit the water it was attacked like piranha to a drowning tapir, and a little roach left his domain and entered ours. “Wow! Jeepers! It’s silver and red! Cooooool.” I felt ten feet tall.

Before I could get the second rod ready, I had to untangle the first several times, rehook it after it got caught in the lilies, unhook several fish, and rebait with maggots.

In the fifteen minutes it took to get the second rod ready, Fred was already suffering under the boasts of Tom, and was behind five nil: “Nah, nah nah naaaaaah nah!”. Every time I threaded the line through another ring, Tom would catch another fish, request its unhooking, rebaiting and recasting, and when I returned to Fred, more often than not he’d have let go of the line or hook or float that I had asked him to hold, and we’d waste valuable minutes feeling our way around in the grass to find it. Then the whole scenario would repeat itself. It was a piscatorial groundhog day, and tension was rising.

Eventually, just as my patience was near breaking point, Fred had his rod in the water and was immediately catching. The look of amazement on a young lads face as he hoiks his first little roach from a pool has to be seen to be believed.

The two brothers played out a fraternal competition for the next hour or so, and lots of little fish were banked—roach, rudd and then little fat carp, with nothing over quarter of a pound. Their enthusiasm was infectious and despite my breathless problem-solving, we were all having a wonderful time, and the boys were learning fast, gradually baiting the hooks themselves, then casting for and fighting and playing little fish (when they weren’t throwing maggots at each other). At one point, following a particularly heavy-handed strike, a tiny rudd came away from the hook and landed in the long grass behind Tom. A frantic and fruitless search caused immediate remorse, and made the boys quickly realize that there is a serious side to fishing, that these are animals, and that with improper handling, they can perish. The lines were back in the water before I could finish my sermon.

While all this was happening I had managed somehow to set up my own rod. It had only taken two flipping hours, and we had five minutes left to fish. I was going to fish on the bottom, while they fished above. I had earlier scattered some sweetcorn and could see the odd patch of bubbles burping their way to the surface, and I was confident that I could round off this day by showing the boys something a little bit bigger than they had so far seen. I had hoped they would also try this approach, but they were impatient waiting for the big one when the little ones would do quite nicely, thank you very much. I could learn a thing or two from them, I thought. But, if I could bank a decent fish, I’d naturally be a hero for a short while, and bask in the associated glory.

You know the rest. The float dipped, then sailed away, and I struck into something a lot more solid than anything we’d encountered yet. The fish surged off into the lilies. Barely had I raised my rod than the line simply snapped like an errant eyebrow hair. I hadn’t even felt properly the pressure of that fish, and I sat there as a bow wave raced through the lilies and out into the middle of the pond. I looked at the limp line and tested its strength in my fingers, and it parted as easily as if it had been made by a spider. It was old line. I cursed my ineptness.

The momentary loss of etiquette and the subsequent profanities were quickly forgotten as the boys hadn’t even noticed my failure, so wrapped up in their own worlds were they. I didn’t need to catch a monster to be their hero. I was Uncle Garrett, and I had thought them how to fish, and that was cool enough.