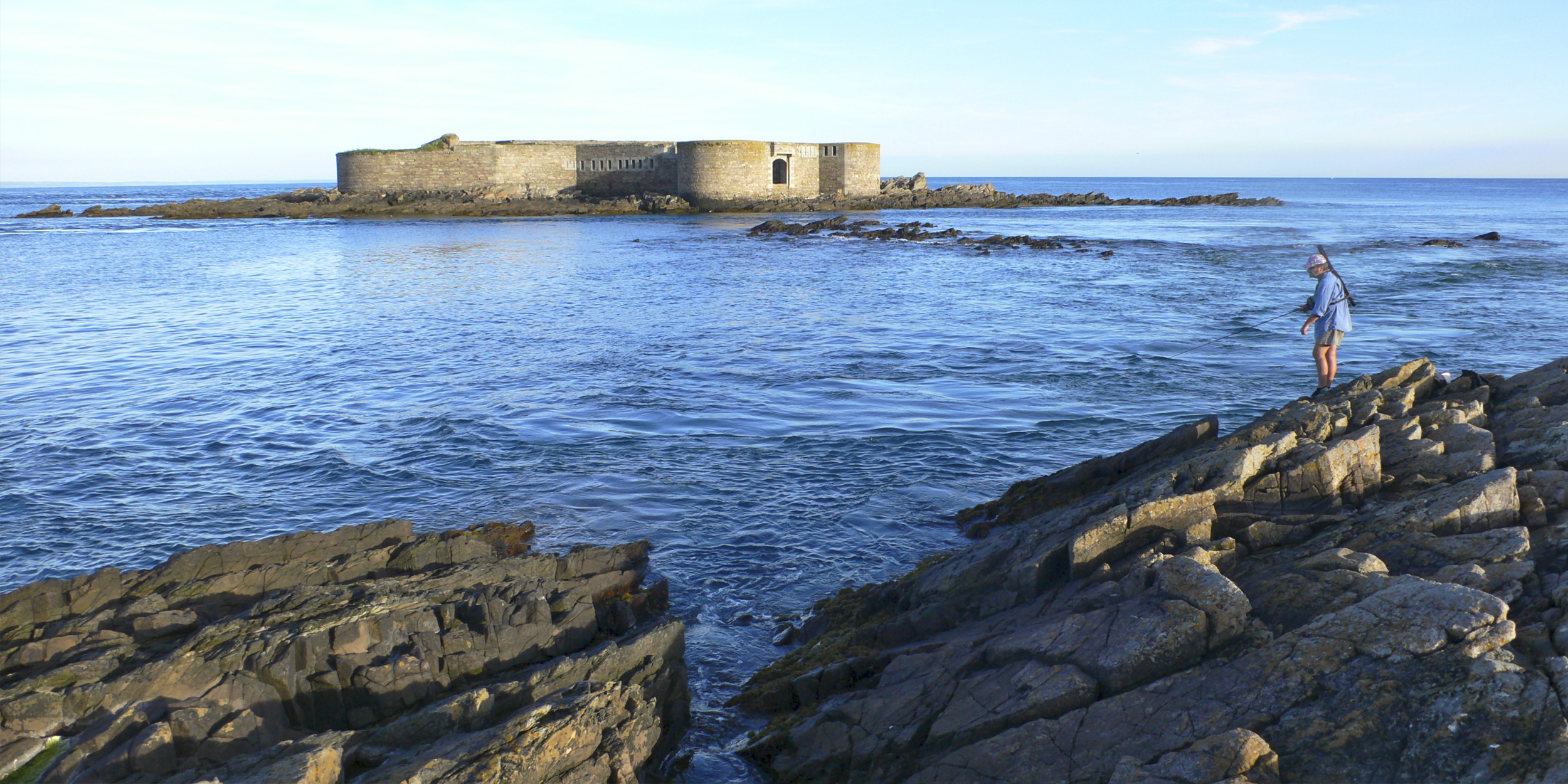 It was a few years ago now, on a bucket-and-spade holiday with the kids. One still evening as the light washed out of the day I got away for an hour and walked with my fly rod along the cliff top above Fort Corblets strand. I was looking for a bass, though perhaps without any real expectation of finding one. I was happy just to sit on the cliff top and look out to sea. It lay flat as a millpond. But some movement out in the bay caught my eye—a riffle across the surface, just enough to trigger a thought, a possibility.

I walked down the steps to the beach. I remember the sea sighing in at my feet, and then with a tearing noise a patch of ocean erupted in front of me with a burst of silver fish fry. I waded in. The beach shelved away fast. Soon the sea lapped my chest, but I got a cast out there and the line went tight. Minutes later I was sliding a fat bass ashore on the gentle swell. A brief window of bass fishing how I’d always imagined it could be. 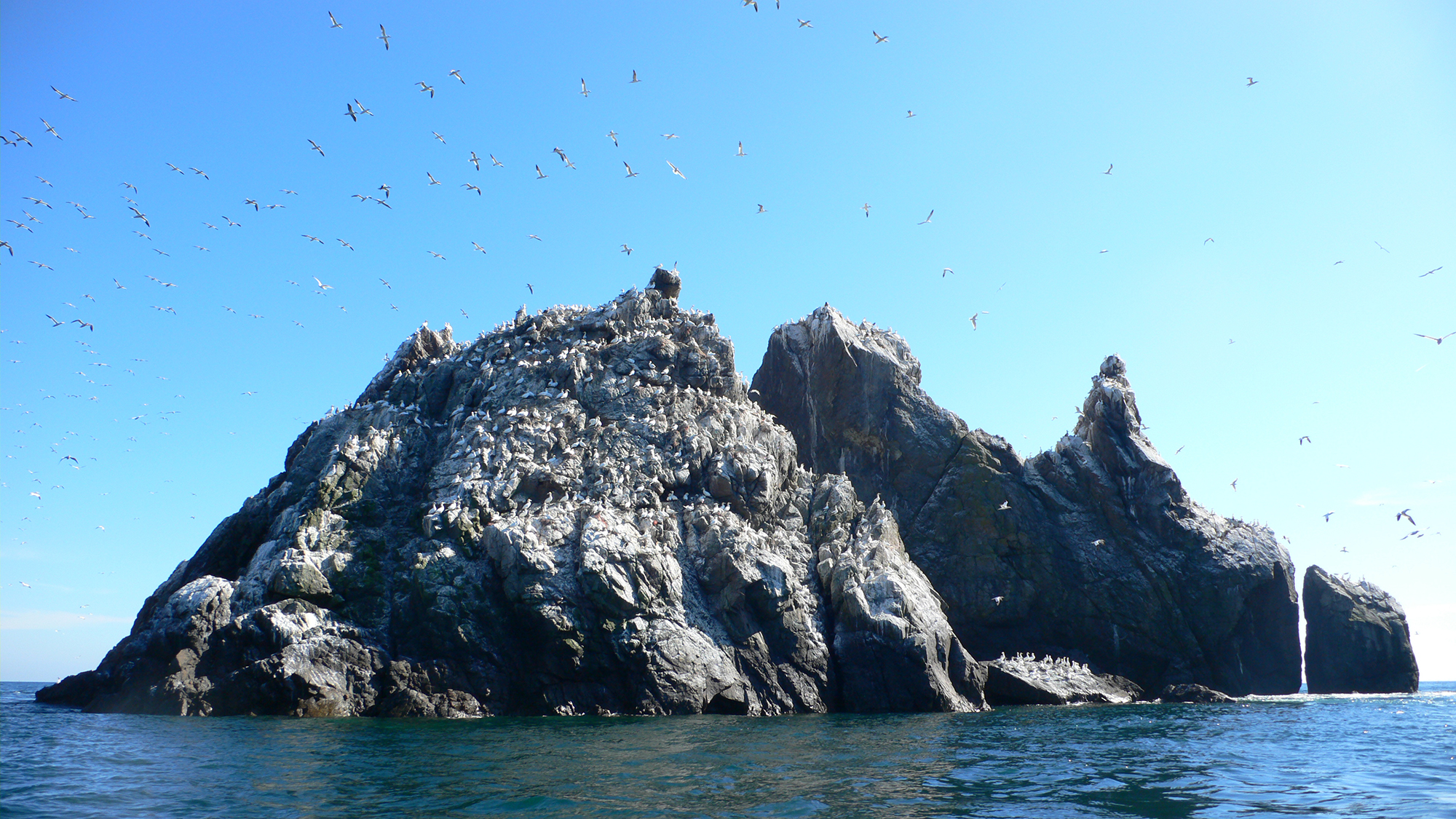 A fish of summer, I have the name ‘bass’ there in the calendar of my brain, right alongside August. To catch a five-pounder off the shore like that and to eat it as the sun dropped under the Atlantic: it was just perfect. I didn’t catch any more that week, but then I didn’t really try—I was there to build sandcastles. But I did make a note to come back.

The plane now is the same tiny, wind-up bus I took then with Vicky and the kids—not much more than a cigar tube with wings and a rubber-band motor. Mark recognises the model from his time on a Zimbabwe farm—a Trislander. We squeeze in under the wing for the short hop and have to remind the pilot which island he is flying to. 30 minutes later we approach Alderney directly from the north, and fly in without circling, catching only a brief look at the craggy coastline, two sandy bays and the clear water marbling through ochre to green to deep, deep blue.

“Hey, man,” says Mark. “The vis is peachy. Did you see the rip round that causeway?”

It had not been a difficult sell. August was washing itself downstream: pretty much everything was blown out and useless. But for a few days the weather peeled open and let the sun shine through and remembering that pledge to myself I rang Mark and suggested we go to Alderney, like right now, before the apocalypse actually arrived. It was Alderney’s annual summer knees-up—a week of live bands, parties and fireworks. The tonic of fly fishing by day and partying by night seemed just the thing to medicine away a wet summer, and as I said, August is bass time anyway.

The plane flashes over Telegraph Bay and lands in a hurry, fizzing along the runway and diving to a halt outside Alderney’s tiny air terminal. We jump in a taxi, stopping briefly in St Anne’s to pick up a map and chat to another Mark at the tackle shop, stopping again to dump our bags into a hotel that is just too smart for the likes of us and soon we are on our hire bikes pedalling the admittedly short length and breadth of the island looking for those 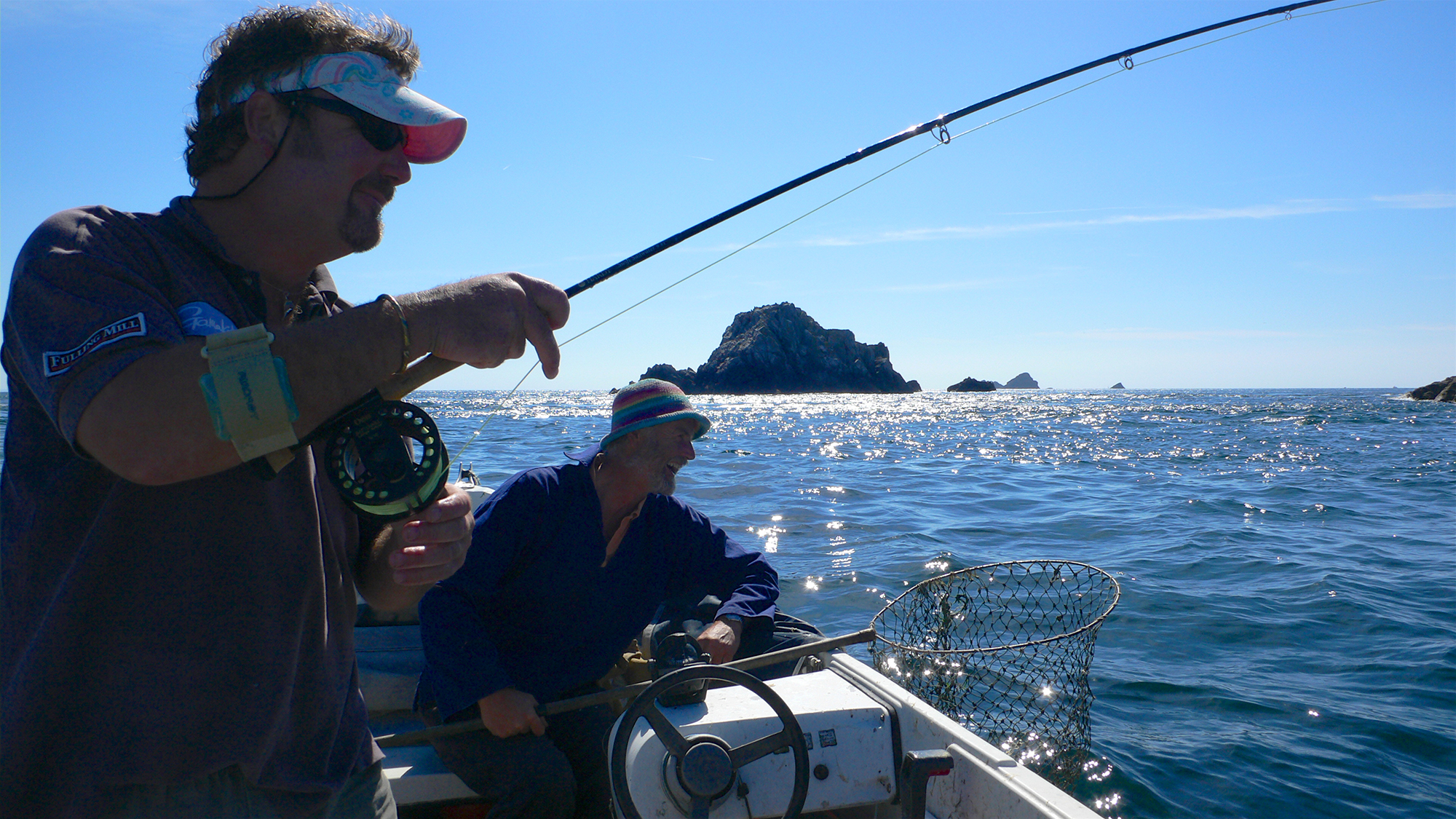 perfect summer bass. It must have been a worrying spectacle given that we are both in our 40s, and we’re cycling in short wetsuits. Mark’s pink bandana is a mistake in the context and with fly rods held across the handlebars we look as if we’re on our way to some kinky jousting gig.

With the other Mark’s map to guide us—all the likely spots scratched over in biro and phrases like “good spot 30 mins after high water”—we hurl our lures off Roselle Point, into Saye Bay, under the lighthouse, and round the back of Fort Raz. We go back to Fort Corblets and eating a choc ice we watch the same bay from the same cliffs, waiting for the same rip in the water to signify the presence of bass. It never comes.

But it’s not as if we are having a bad time. We’re been stopped three times by a policeman who clearly has nothing more worrying to contend with on this idyllically peaceful island than two mid-life crisis anglers riding erratically home from the pub. By Wednesday we’re on first name terms with him and have learned that the crimes most worrying to locals are anti-social behaviour (two mid-life crisis anglers riding home from the pub etc) and leaving dog shit.

As we end each day fishless and fitter we’re making friends from amongst an amused and gently tolerant crowd of islanders. There’s Rea, the publican at The Divers, who greets our sandy, wet arrivals with perfectly timed Guinness; the Burger Queen, who serves a mean breakfast to those up early and feeling hungover enough; there’s Jo, who shepherds us to the mosh-pit of the Battle of the Bands and later takes us on a midnight 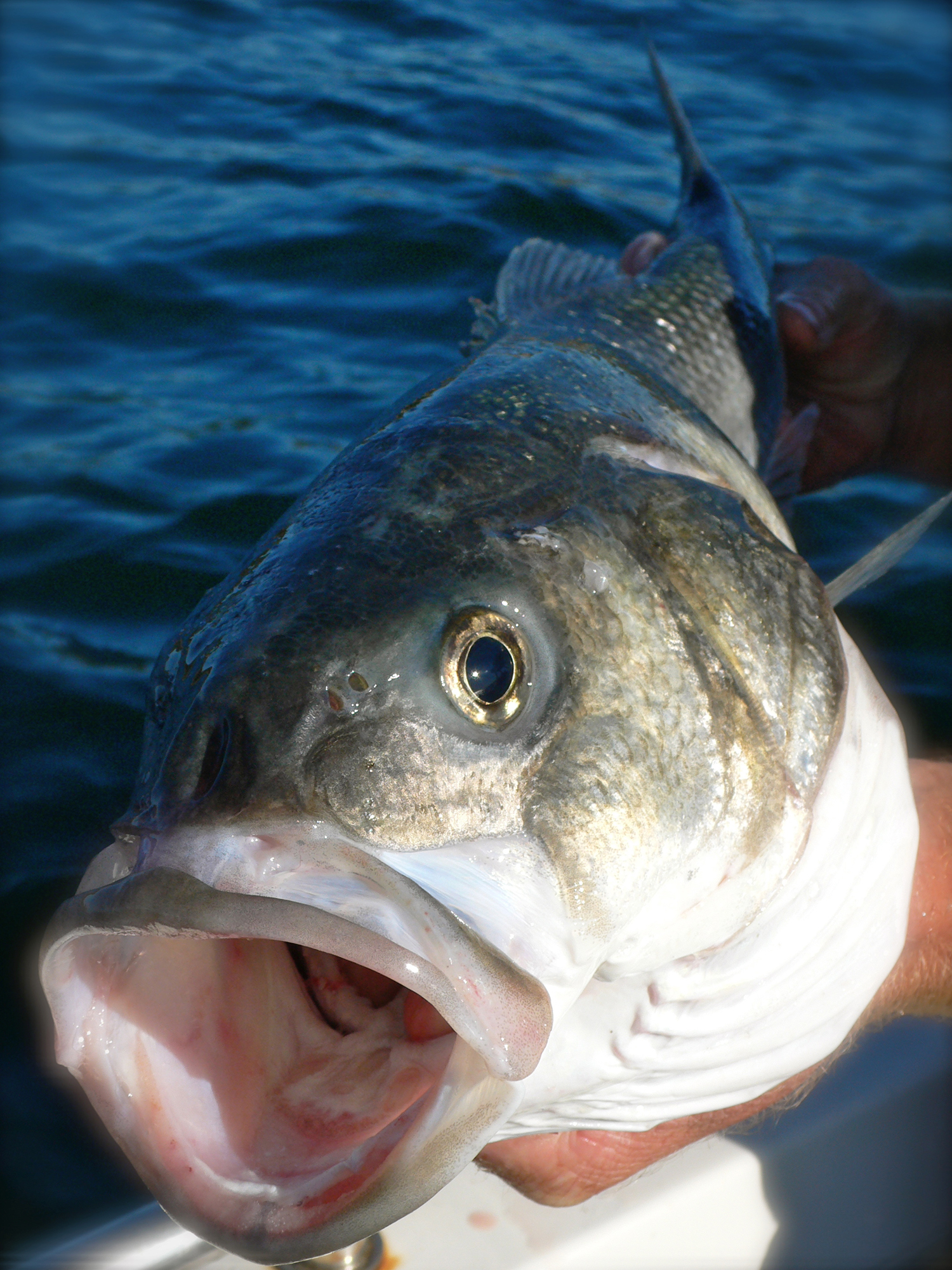 hedgehog safari (we found that the blonde hedgehog, unique to Alderney, is in fact uniquely difficult to find even on a thrice round the island nocturnal jaunt); there’s the local band Gay Army (neither gay nor an army), whose lead singer is nice enough to pretend to believe that Mark really can get them a record contract; there’s Amanda, who does the very best of penguin impressions; and there’s Howie, who taking pity on our lack of internally combusted transport, taxis us in his van from one fishing honey-hole to the next… though none ever has honey in them.

On Thursday night, back at Rea’s, after a third unsuccessful day, and a successful third pint, Howie turns to us and says: “Now you know why we’re called a drinking island with a fishing problem.”

Finally, tackle shop owner Mark suggests that the fish might still be offshore and offers to take us out for the afternoon in his boat.

We find him at the appointed hour standing, cross-armed, but hanging back from the chaos of yachties disembarking and embarking from a flotilla of tender dinghies. Mark spots a gap and motors across to get us. We throw our rods and reels on board and clamber over. “You know we call ’em WAFIs don’t you?” Mark nods at the yachties. “Wind Assisted Fucking Idiots.”

We putter along inside the breakwater, while Mark takes us through a quick—far too quick to mean much—safety briefing. Here the water is flat like a canal, but up ahead I can see a rolling swell where the sheltering wall ends and I hope I took my landlubber pills soon enough. Mark’s boat seems all wrong to me. It is taller than it is long and has the look of floating shed. We pass the last speed-limit buoy, Mark pushes the throttle forward and this weird craft, that feels like it ought to have all the firepower of a golf cart, lurches forward with venom.

“This might get a bit bumpy,” he says, an impressive understatement as we smack through the first wave. If we were hunkered down inside a speedboat, barping across the menacing, corrugated sea, the journey might be less terrifying. In this crazy, turbo-charged dog kennel it is truly weird. The party gathering on the commercial quay disappears in a curtain of spray and we are off on our own form of flight. The boat thumps into the swell, seeming to take off against the bigger waves, slam-dunking down with a crash that shakes the hull. Then we are through the oily, rolling stuff and onto a cobble-pavement of ratchety water that hammers under us like a machine gun.

We run round the first peninsula and stop inside the shelter of the Clonque Bay where the water domes up like a massive lens, before rushing off in a tidal sweep through a line of rocks that look like bad teeth. These end at Fort Clonque, which stands imposingly at the point of a sickle-shaped peninsula. Its causeway is covered at high tide, making it a twice-a-day island, like several other Napoleonic forts dotted around the Alderney shoreline. 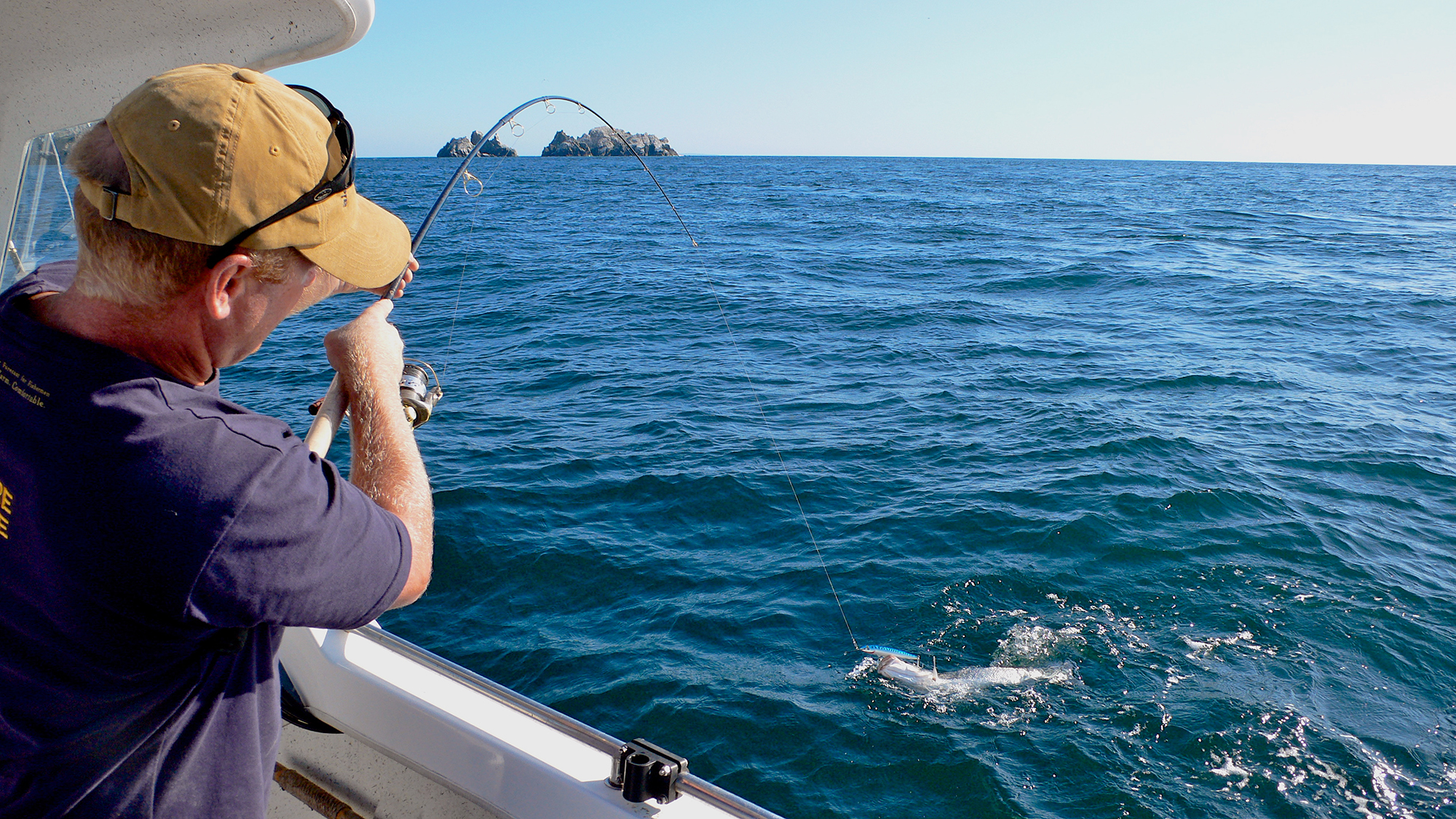 Three casts in and the skipper has at least proved the fish are here. His rod snaps down, bounces up again as the fish comes off, then down again as whatever it is turns back for another go. Minutes later he is clutching a chunky, silver slab of bass. We’ve found them at last! And it isn’t the only fish of our session, nor the biggest—Mark lands that one a few minutes later—but put it this way, when we turn for home, though we have a bass for our impromptu sashimi party it was neither me nor Mark who caught it.

Never mind: the fish is just perfect. Rea doesn’t bat an eyelid when we slam the sea monster down on his bar, and dripping water and leaking sand all over his floor ask for a sharp knife and two pints. Sliced thin and raw as the wind, the meat shines like white marble. We chink our glasses and wash it down. “Hey man, have wasabi will travel,” says Mark. Parties it seems are a lot easier for us to find on Alderney than fish. Soon our plate of bass is reduced to a rubble of squeezed lemon quarters and a few smears of green paste.

But it is our final evening. All our chances are blown. Bags packed and waiting for our cab the following morning I stroll out onto the breakwater to snap a picture of our luxurious hotel. It’s the first time all week that I’ve been out here. I take a look down into the water below, where the waves are washing the shore alongside all the kids and sandcastles, and there, cruising serenely along the surf line and not even slightly difficult to locate, are two enormous bass. The lesson being that if you want to find bass you must come here to build sandcastles. 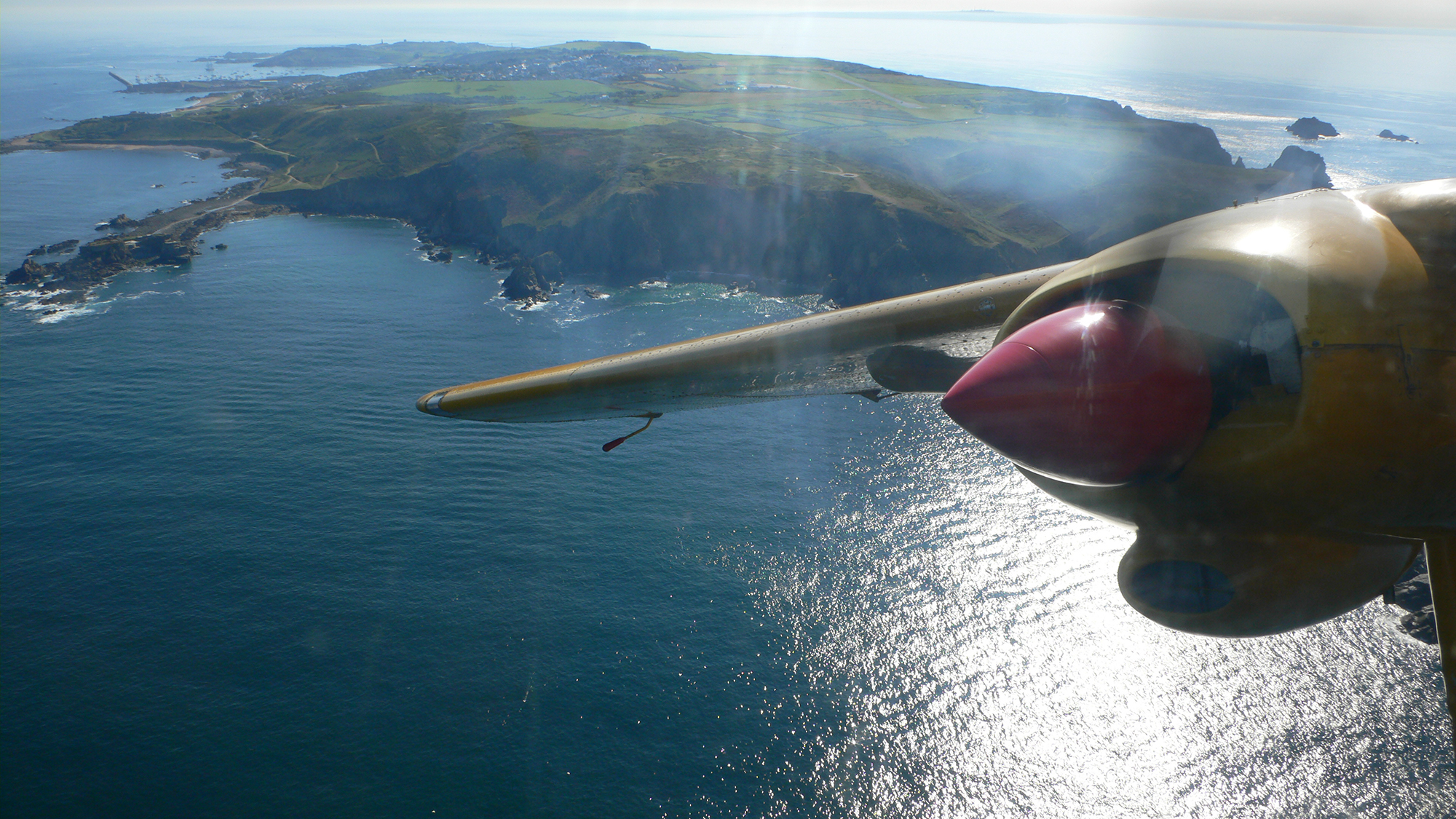