By Garrett Fallon on March 5, 2015 in FALLON FISHES 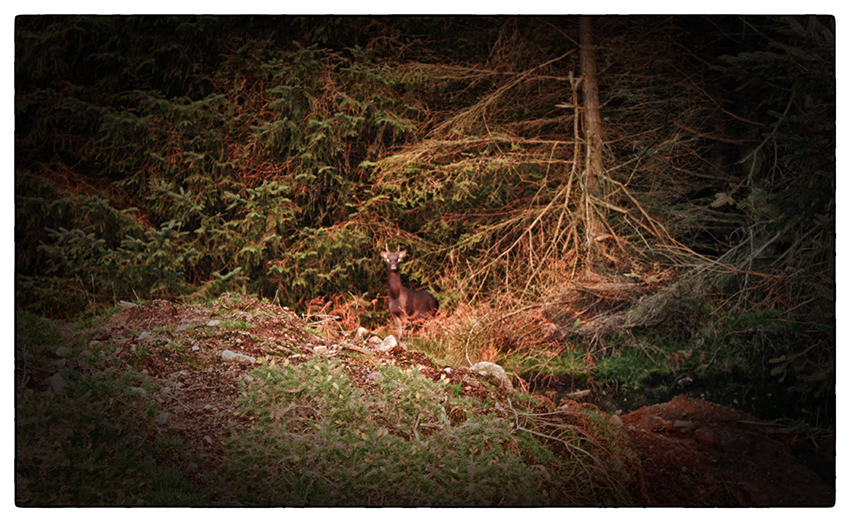 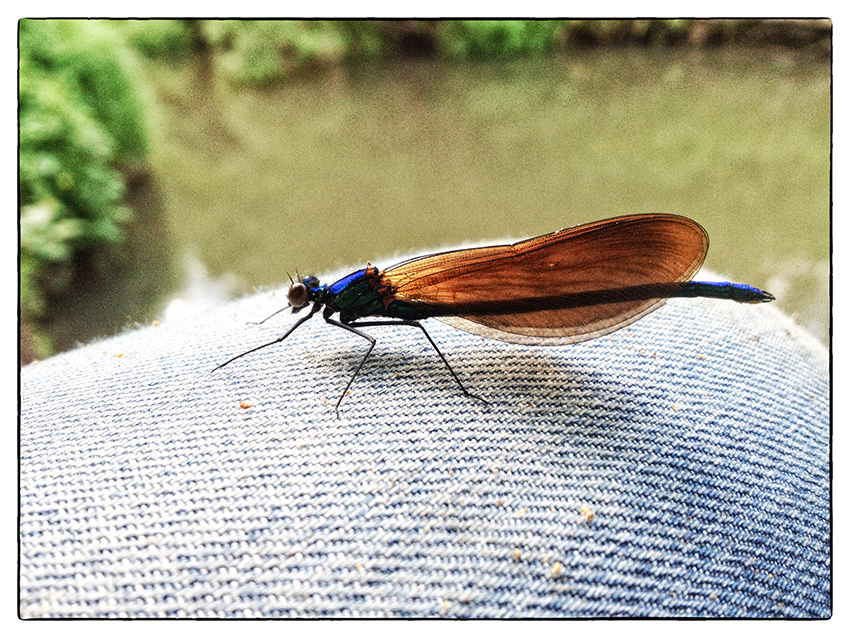 A colourful visitor takes a break from flying 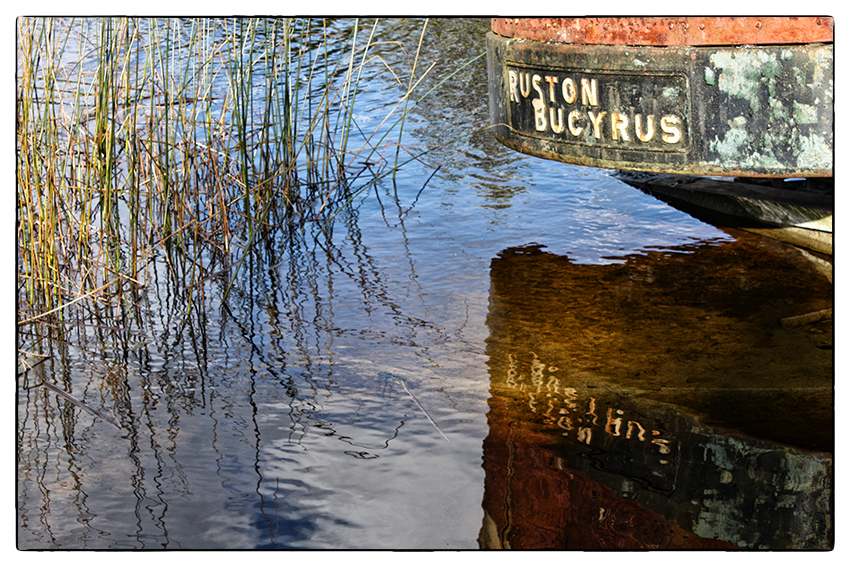 The “Rusty Bucket”, left alone for nature to claim as her own

This was first written in 1994

It had been a strange week indeed, with so many things of a different nature spinning frantically around me as to make me dizzy and tired of the hectic way I was prone to live. Too often I allow myself to sink so low, so far down where I can’t see the light at the end of the tunnel; where life takes on an all too serious tone. In times such as these, I feel drawn towards a less crowded room, where things happen at their own pace; where I can simply sit and watch the world pass me by.

Being an angler can sometimes make dealing with the pressures of life easier, there being an instant escape from whatever it is that’s forcing itself upon you. But it is not always possible to fish whenever I like, and so I have to compromise in order to retain some semblance of sanity. I have, as a result, taken up football, which gets me out into the air and keeps me fit, but it is, alas, a competitive sport, and tends to bring the problems of the office out onto the pitch; a few misplaced kicks can be very gratifying as long as they’re given, and not taken.

I have also tried to walk more, but city car emissions do not agree with my lungs, and I don’t feel at ease just aimlessly walking around, ending up back where I came from. What is the point of that? So, I have maintained my sanity by looking at the water whenever I can, whether from a bridge over a river or canal, or by strolling past a pond, watching small fish go about their business as if they were a thousand miles from anywhere, oblivious to the human world that hustles about them.

I have begun to appreciate how diverse and precious the natural world is. I was, like everyone, shocked when the probable callousness of business mismanagement led to the pollution of a south Dublin river, yet it finally showed the ignorant city how alive it actually was, by revealing to our eyes its dead. Nearby, despite the grappling claws of society, in the middle of our capital city, two canals wind their way out into the countryside, passing over all manner of urban situation while remaining full to the brim with freshwater life.

In my local park in Ranelagh, there is a small, shallow pond in which lives eight single-figure carp. During the summer I often go there just to watch them swim around. Occasionally I throw them pieces of bread, and imagine—as a great mouth sucks the crusts from the surface in a delicate swirl of water—that my hook is embedded somewhere in the middle. They fascinate me, hanging around in twos or threes as they do; I often wonder why the loner swims on his own, perhaps the result of some domestic altercation with his spouse? Yet these moments of happiness (for me) are still fleeting, and eventually I must go to the countryside where natural things are surely at their finest.

I like to take my fishing very seriously, planning everything down to the last detail and hoping in the process to catch some fish. Yet occasionally, for reasons unknown, the fish just don’t bite, and so I am consigned to hours of fruitless labour. But during these times I have earned some of my fondest angling memories, as I find myself lapsing into a state of closeness with the environment around me. I have sat there, on the banks of the canal, watching my float and wondering why on earth it has not dipped or slid under the surface in the past hour or so, when suddenly my eyes catch something moving at my feet, and a field mouse makes its way across my shoes. Once, when I was sure there wasn’t a fish within a mile of me, the biggest tench I had ever seen cruised from the depths to browse for offerings beneath my feet.

The english writer Tom Fort has a theory about fishing, believing that somehow (using some super sixth sense), the fish waits for a lapse in the angler’s concentration, and in this moment of weakness, bites, removing the bait from the hook. There isn’t an angler alive who, during a fruitless session, hasn’t left his rod fishing by itself in order to empty his bladder in the local shrubbery, only to turn around and witness his (fishing) tackle sliding away into the depths, pulled by a great fish.

I find sinking into the background of my surroundings deeply satisfying, but you only reach this point if you’re not thinking about it. Izaak Walton ended his later versions of The Compleat Angler with the words “Study to be quiet”, and surely these resonate with all anglers? The fact he was quoting Thessalonians 4.11 shouldn’t be held against him. He successfully makes his point with all the effort of a gentle kiss blown from the lips of a milkmaid.

One sunny afternoon, I sat by the canal, concentrating hard on trying to catch a big bream, when the biggest mink I had ever seen came trotting down the bank to within five feet of me. I had remained still for so long that he simply hadn’t seen me, but on turning around to greet him, he stopped and gazed at me for about two minutes with a totally nonplussed look on his face, then simply hopped into the water, never to be seen again.

In the same location I was night fishing with a friend, when I became aware of a strange sniffling, grubbing sound emanating a few yards from where I was sitting. I whispered to my companion to grab the torch, and together, with some trepidation, we moved towards the spooky noise. To our amazement, we were in the company of a large hedgehog, dining on scraps we had left for the birds. It displayed absolutely no fear, so we swiftly removed some biscuits from their wrappers and placed them on the ground, and for the next hour or so were amused by the obvious satisfaction we had brought to this beautiful, spiny, animal.

Kingfishers perching on fishing rods, robins eating maggots by your feet, water voles swimming under the rod tip, and surely the piece de resistance, an otter swimming by or working its way along the opposite bank, oblivious of your presence; these are moments of reward to the quiet angler, to be cherished in the busier days, to add nourishment during those prolonged droughts and subsequent famines caused when we are kept away from the bank for too long.

I have fished for some years now and have seen a lot of things. Yet nothing moves me more than the constant variety of life one encounters. I have lately begun to take things less seriously, and have, as a result, enjoyed my angling more, and I receive great pleasure from knowing, in my heart, how truly lucky we are to be able to enjoy the natural world that is merely outside our window, to find that less crowded room in the wide open spaces, right in front of our eyes, and under our feet.