By Garrett Fallon on December 19, 2016 in BIG FISH, FALLON FISHES 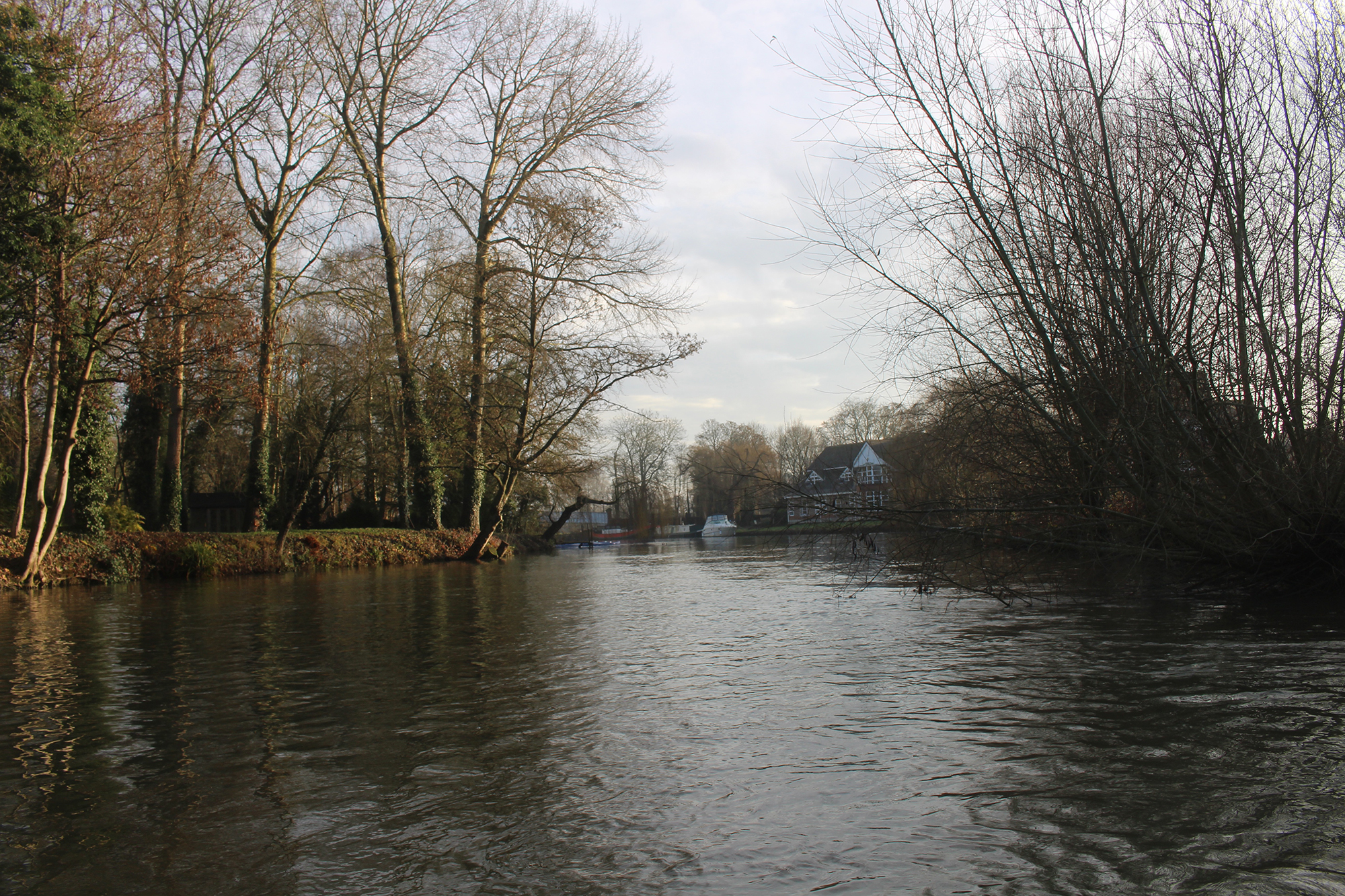 Chub trot: behind the island at Pangbourne

5am. It’s dark. Sort of. There’s a full moon that lights up the garden like a five-a-side pitch. I can see my cat racing along the grass to tackle a trespassing fur ball. I like these early starts, when it feels like the whole world is asleep, but of course it’s not.

A couple of train journeys later and I’m in the throng of Paddington station, London. This world is certainly awake. Streams of people exit the platforms like ants, pushing down the escalators and underground. So many different types of people, all shapes and sizes, all colours and creeds, a myriad idiosyncrasies blending into one indeterminable form, and through them I spot Rick, here to receive his Christmas present.

We last met over a huge rudd. Literally. It was directly below us, half in the water, half out, objecting strenuously to being hauled onto a lily. It was gorgeous, exotic, golden; Honor Blackman with bright red fins. It was the biggest rudd I’d seen in 25 years, and from a ditch narrow enough for a gobby truant to spit across. Then the hook hold failed. Damn.

I’ve thought a lot about that fish since then. Rick, new to fishing, held the rod under my instruction. The swim was tricky—weedy, snaggy and tight—and we were fishing directly from that bloody bridge, where the landing net handle wasn’t even long enough to reach the water. I was courting disaster, tempting fate by dancing on the precipice, asking for trouble by spitting beer in his face, flouting Murphy’s law by neglecting some hard-earned angling basics. Everything from that swim had been small, prior to that ruddy fish, but wouldn’t you just know it? It was the fish of a lifetime. I keep asking myself would I have landed it if I had hooked it? Maybe, just, but only if I’d had the balls to jump into the water. And boy did I deserve a dipping. Subsequently, I felt I owed Rick an apology of sorts. It was no way to encounter one’s first good fish when you haven’t even had the chance to learn how to play one on a rod before. What could I do to make amends?

That’s where angling guide Steve Roberts came in. If there is one location where you’re likely to catch a fish in the winter, it has to be a weirpool, and if there’s one way to make sure you have plenty of space to play a fish, it surely has to be from a boat? By 9am we were sitting in a punt at Pangbourne, beseeching Old Father Thames to play Father Christmas and put a decent fish on Rick’s rod. The pressure was on.

God I love the river. Despite growing up next to one, I was mostly a stillwater angler in my early days. But now the river is where I’m happiest. There’s something about the fleeting nature of the moment, the current whisking it away, as if the unique serendipity of all that the universe stands for conspires to land that fish smack bang on the end of your line. And if you miss, it’s gone. The swirl and burble of the current is a call to action for my senses, and a smidgen of wanderlust wonders what would happen if I were to take this punt and head off downstream, let the current carry me wherever. Well, in this case it would be straight into the middle of London, so chances are my trancelike state would be broken by the throb of a million cars on bridges or the foghorn from a tanker about to run me over somewhere in the North Sea. Alas, to dream.

Some say three’s a crowd, but it didn’t feel that way. I enjoy allowing the morning breeze to clear my head, and watch Steve pass on years of accumulated wisdom to a new angler. Surely there are fewer simpler ways to fish than dropping a float over the side and letting the current carry it downstream, the centrepin unfurling line like silk from a spider, and no simpler bait than a pinch of bread? The unfussy nature is the perfect antidote to modern life where so much is over-complicated. 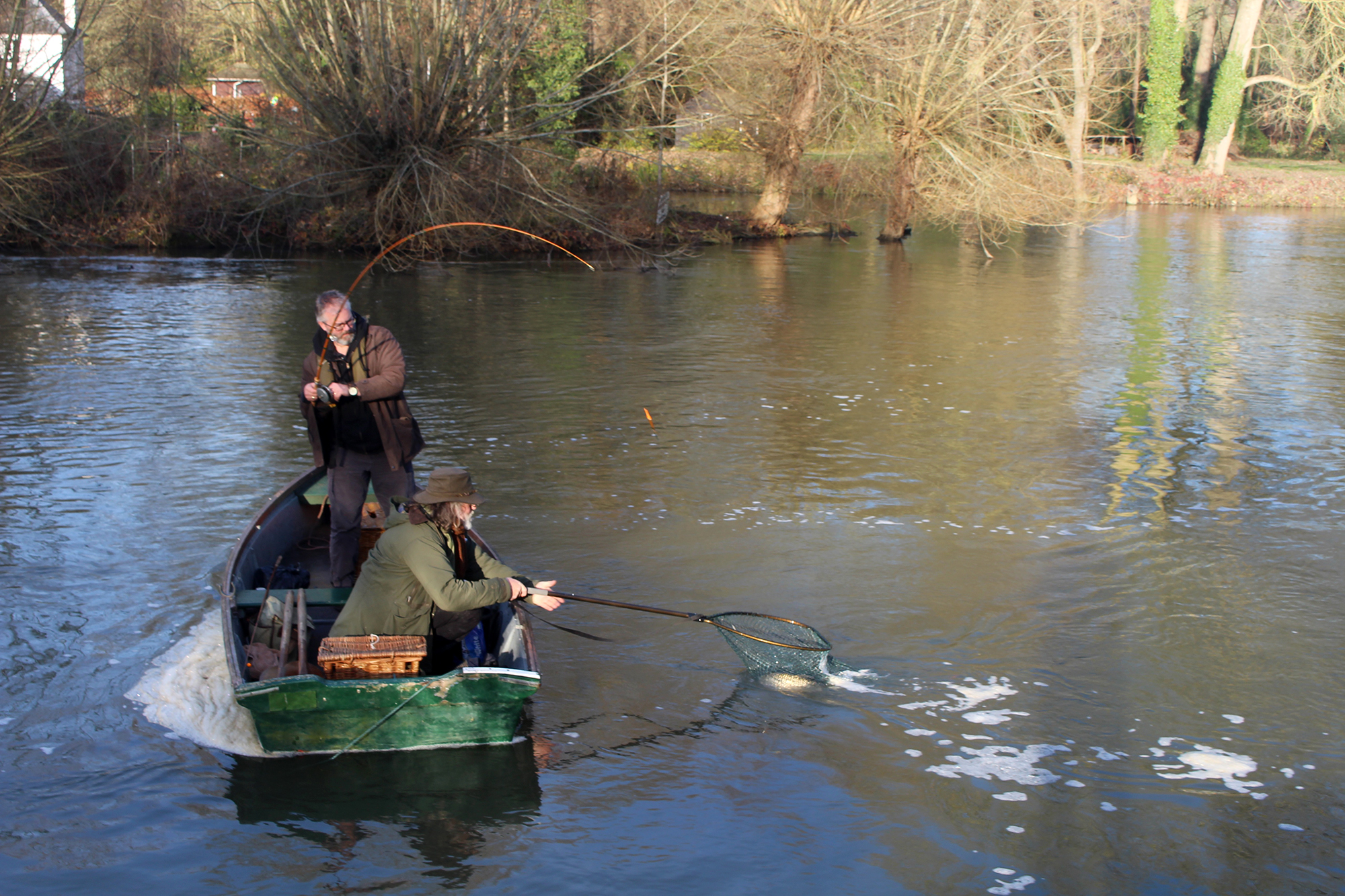 First fight: and the chub is in the net

Rick was getting the hang of it but the river was up and running with extra colour in its veins, yesterday’s rain pumping Old Father with steroids. The fish were not where they were supposed to be, but in a boat you can scratch those out-of-reach places and we roved around, until we ultimately moored right back where we started, against the outflow from the little river Pang, and Rick cast into the slacker water right under the bank. The float settled, slid away quickly, and he was in. 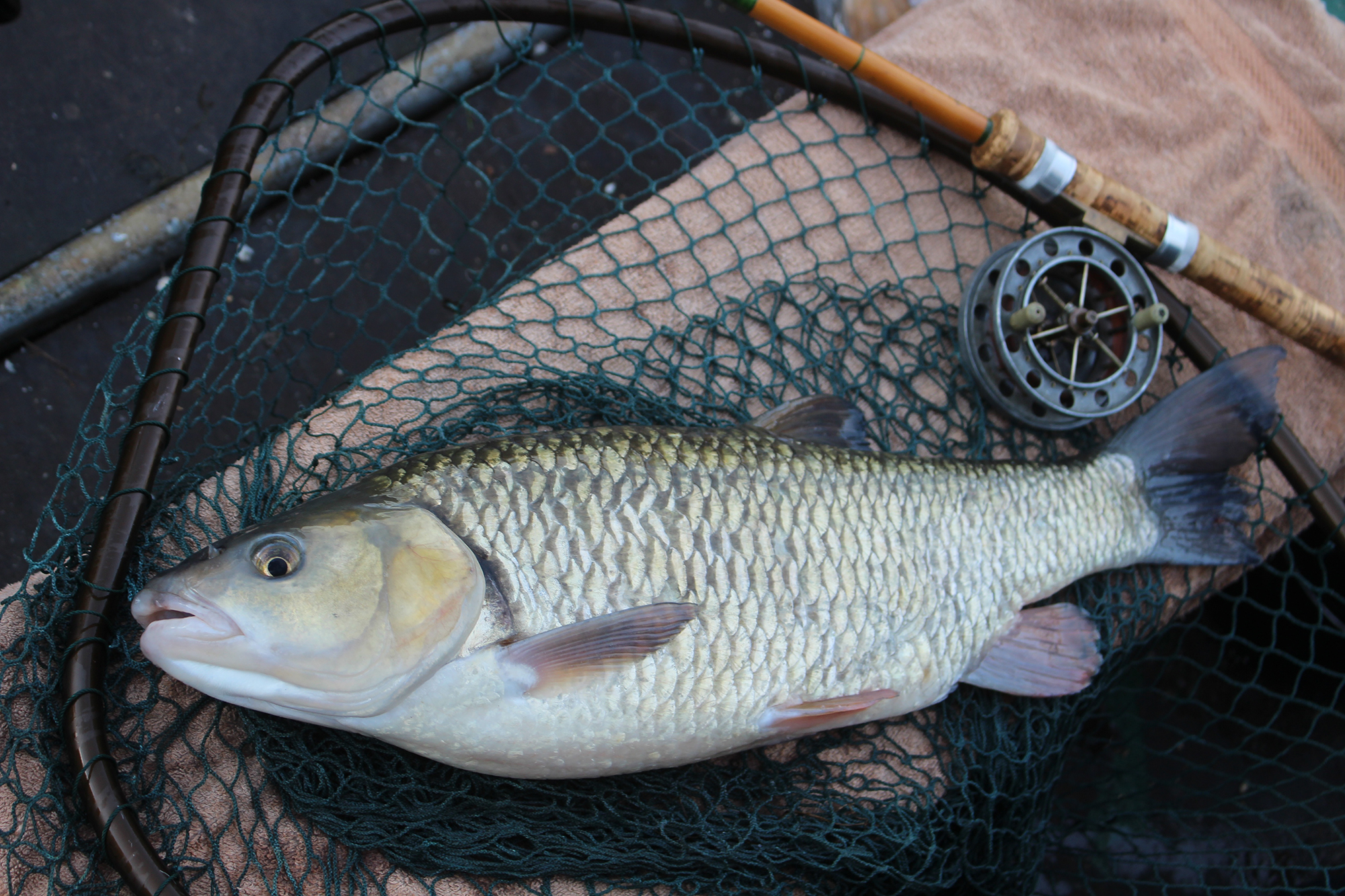 As fate would have it, I was on the bank to watch that fight, having disembarked to avail of the toilet in the nearby pub (staying momentarily to snatch a cheeky half and watch from afar). I returned just in time to see Rick strike into that hefty chub, and play out his first proper fight with a fish. He was remarkably calm, surprisingly so. In my mind’s eye, I am a basket of nerves with practically every fish, yet here was a novice acting as if he’d done this a thousand times. It was rewarding to watch the instructions sinking in, the rod creeping upwards to create a bend, learning to let the fish take line when it should be given it. It was a hell of a first chub. Under the scales it touched five and a half pounds, and looked like it could play prop forward for England. 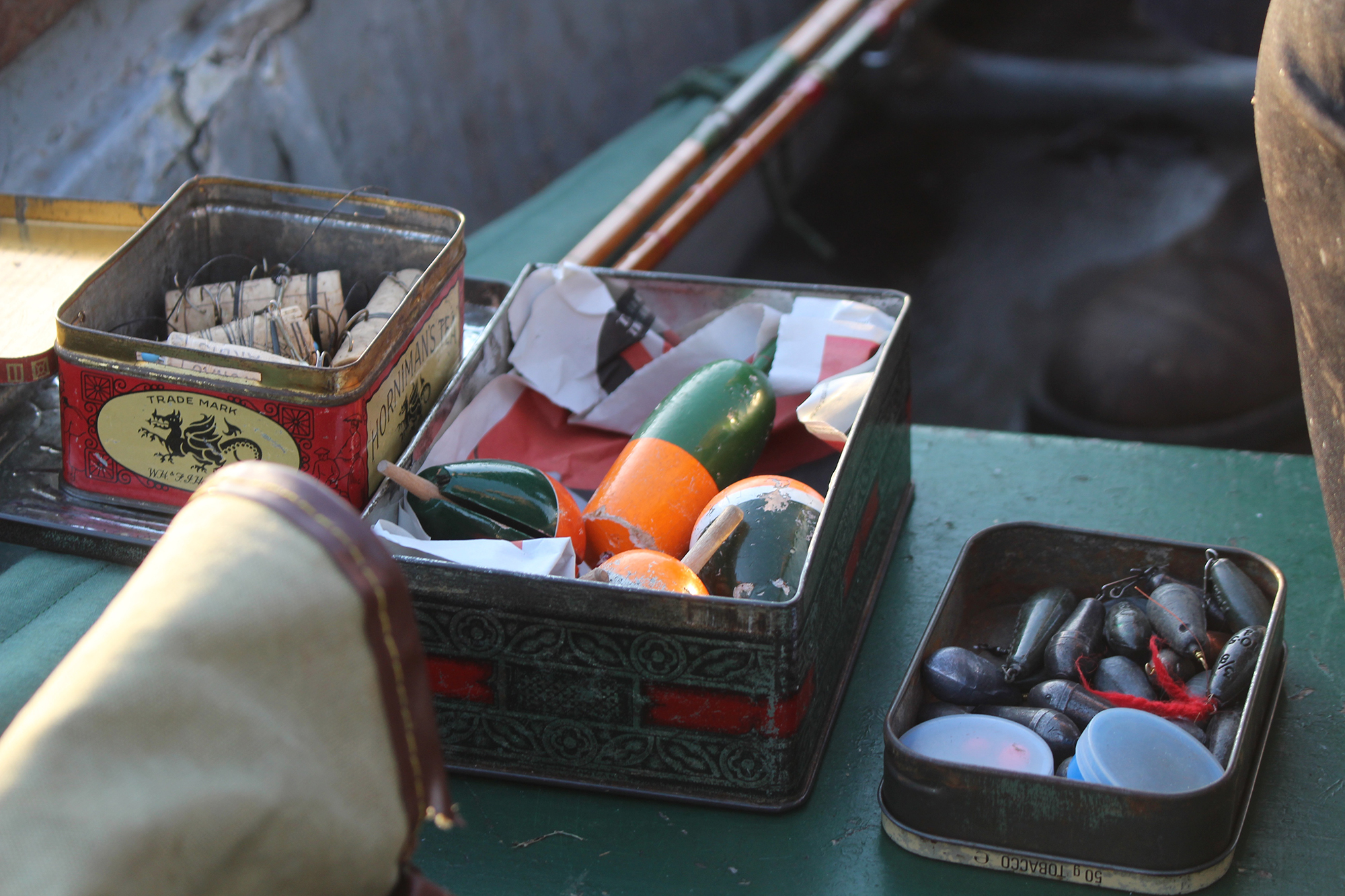 Winter days are short of course, and we all know how fast time flies when fun kicks on the accelerator, so with the chub back in the water we switched our attentions to Esox lucious. If there’s one fish that will really create an impression, it’s the pike. Soon, an 80 year old rod cast a Fishing Gazette pike bung about three metres from the bank (it is an odd sensation casting towards the bank from the middle of the weirpool) and a smelly old pilchard was tasked with somehow making itself irresistible to the weir pool’s apex predator.

“I guess we can just sit back and relax now?” said Rick.

“Well…  absolutely.” said Steve. “But keep an eye on that float.”

“How long does it usually take to get a bite?” Rick asks.

“Well, how long is a piece of string? But funnily enough,” Steve adds, “when you first fish a new spot with a deadbait, IF there’s a fish already there, it can often take no time at all.”

“You couldn’t be more correct Steve,” I interjected, “because the float’s moving.”

Rick calmly reeled slowly into the fish, felt the resistance, then struck hard. The fish headed straight for the boat which gave the false impression it was smaller than it was.

“Be careful now,” Steve said. “When it sees the boat all hell will break loose”.

And so it did. And that pike turned sharply and headed in exactly the opposite direction, with Rick appearing slightly less calm than before, but still coping admirably. I made a mental note never to play him at poker.

We had a bit of hither and tither, and the usual under-the-boat shenanigans, but for the most part she played herself out of reach of danger, and was netted quickly. Rick’s first ever pike, cleanly caught just inside the front of the mouth, easily unhooked, and taking the scales to 14 and a half pounds.

“That’s a massive fish, isn’t it? Surely they can’t grow much bigger than that, can they?” Rick asked somehow through an enormous grin .

“Yes, it’s a gorgeous fish. But… em… the current British record weighs over three times the size,” I replied.

Darkness moved in quickly, but not before I caught a pike of my own, a battered and bruised girl with half a tail, the scar from a close encounter much earlier in life. At just over ten pounds, she was, strangely, my biggest fish of an exceptionally challenging year.

The train took us back to London, to a pub for a celebratory and customary post mortem, and a chance to take it all in. I didn’t want the lost rudd to be the defining moment of Rick’s fishing. Yet, ironically, that failure will now play an even more important role, reminding him that not every day do you catch a 5.5lb chub and a 14.5lb pike, that angling’s failures make the successes all the more sweet, and when you catch as fine a pike as he just did, that it’s not just for Christmas, but for life, for therein an angler is born. 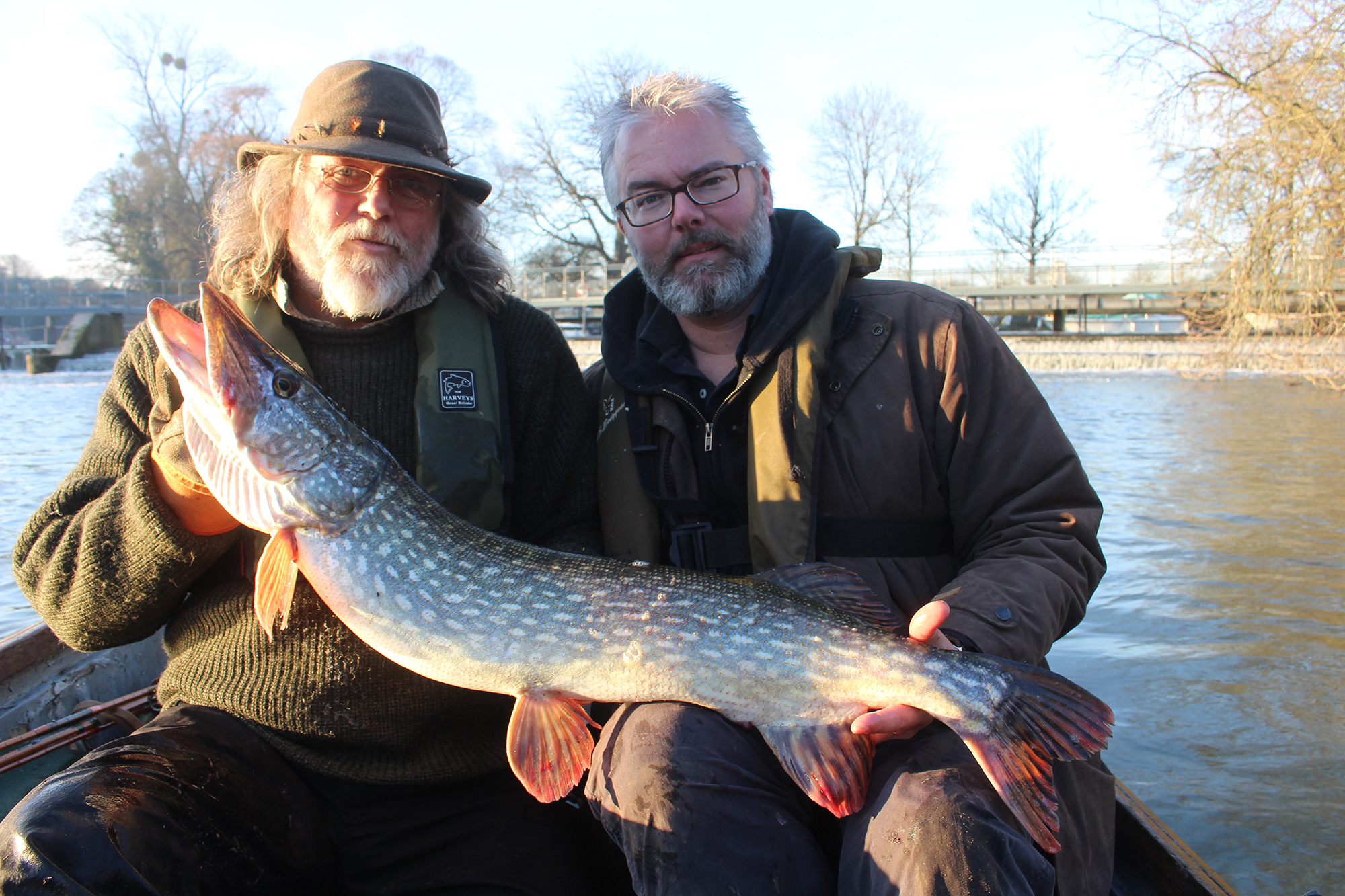 Rick (right) and Steve with Rick’s first pike of 14.5lbs 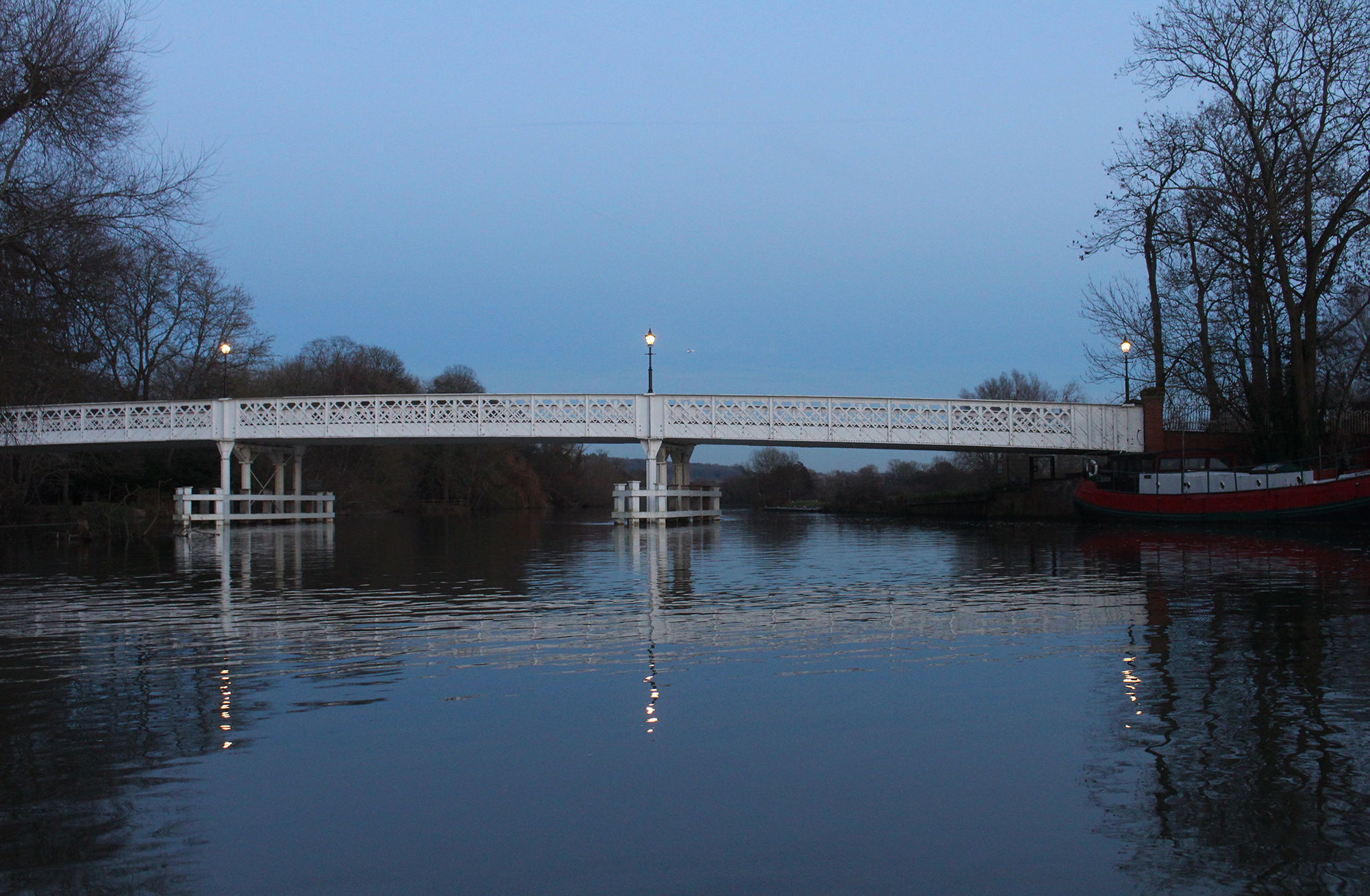 End of day: time to head to the pub

Audio: A pike is not just for Christmas, but for life
Friday’s Allan’s Fangler (FAF—but on a Monday this time): November 2016