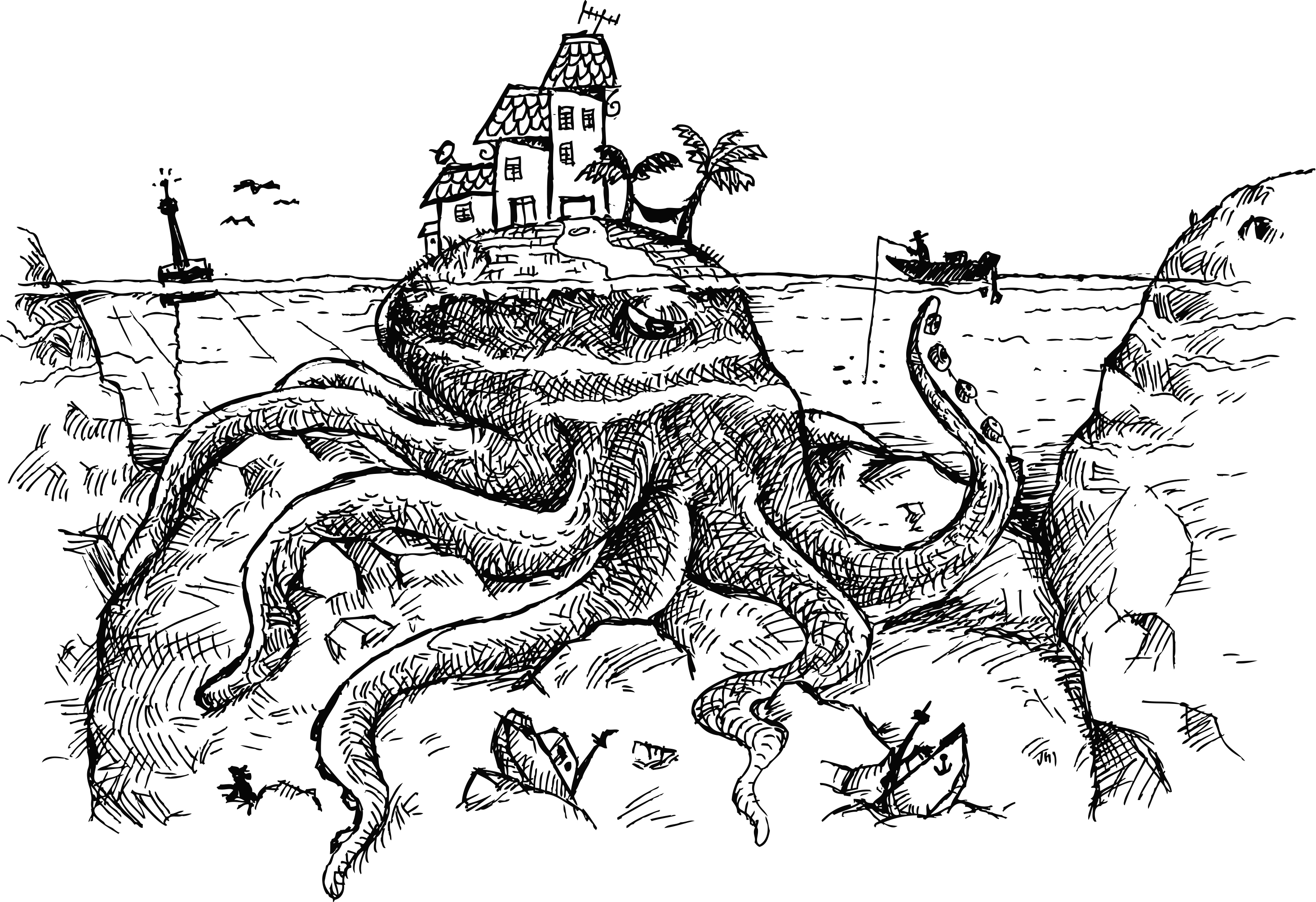 There aren’t many benefits to a Cold War. There are fewer explosions than an actual war, and less food rationing – but that is about it. Apart, of course, from the absurd stories of technological wizardry and cunning that are so unbelievable they just might be true.

We are a little way away from the days of Tinker, Tailor, Soldier, Spy, but that hasn’t prevented one or two spectacular stories from emerging in the more paranoid echelons of our popular press.

Organism 46-B is a shape-shifting, man-eating 14-legged giant squid (or octopus depending if you read the text or look at the pictures) that is stalking the Arctic and is being lined up by Vladamir Putin as some kind of secret weapon.

A research team found a specimen in Lake Vostok in the Russian Arctic, whereupon it disabled their radio signals and then began picking off the crew one by one. Having hypnotised, poisoned and devoured one team member, a tentacle of the beast was lopped off only for the severed limb to reanimate, slither across the ice and strangle another researcher in her sleep.

I could go on, but I don’t want to spoil the whole story……

The youth of today eh? Sitting around playing Fifa 2017 and Dark Souls 3, a bit of footy on in the background, some smart phone banter with your mates.

They should be out fishing – not lounging around in the luxury of central heating downloading pictures of Taylor Swift in her bathing costume.

Hmmm, okay – that does actually sound quite good, but they should be fishing. We need them.

Junior rod licence sales have been alarmingly low for a fair few years, and despite a slight revival, The Environment Agency has done the sensible thing and made them free. Hurrah! Of course, it was always free for under 12’s and the price of a Junior Licence was only five quid, but it is a step in the right direction.

And anyone worried about where the shortfall might be made up, fret not. The standard coarse fishing licence is going up by £3 while the game licence gets a £10 increase. A day licence meanwhile is going up by 60%.

Blimey, a cynic might suggest that with the ongoing cuts to the DEFRA budget, the rod licence has been singled out as a potential money-spinner by which to make up the deficit.

But Fishpool, of course, is not a cynic.

There’s a fine line between art and indecency – in fact, it is a margin that blurs quite advantageously at times. Think of those Amateur Photography books in the school library or that study you did on Cezanne and his ‘nude bathers’ – honestly, mother – it’s art.

Space World Theme Park in Kitakyushu, Japan, has this month ruffled a few fins with the instalment of a new ‘artistic’ ice rink. The idea was to create an aquarium themed attraction where people could skate while shoals of fish swirled through the ice beneath them. Some of the larger fish were enlarged pictures, but the bulk (five thousand) were real fish that had been frozen into the ice.

Space World assured people that the fish were dead before the rink was created, but nevertheless public opinion has forced a serious rethink.

Frankly, the whole thing is nonsense. Water was created for smoothing the rough edges off a single malt and for fishing in – ‘ice-skating’ is just plain daft. Like sailing.

The latest ‘must-have’ gadget accessory for any after hours angler is the Night Cast. At over five hundred quid it isn’t exactly cheap, but it does allow you to see in the dark, and that could be very useful indeed.

Imagine sneaking up the east bank of the Royalty in the days of the dusk kick out. A swim primed with hemp before sunset and now the pesky bailiff can’t catch you out because you’ll see him coming! Genius! Eh? Oh…..

That’s not what it’s for apparently…

Instead, this Military spec piece of kit is aimed largely at carpers, enabling them to cast accurately at night, spot moving fish and angle on into dark with floating baits.

It sounds as though it could be quite a bit of fun, even if it is a bit beyond Fishpool’s funds. I did ask Editor Fallon to pick me one up at the Vintage Tackle Fair in Redditch earlier this month, but apparently they, ‘aren’t the sort of thing he’d find there….’.

Full of excuses that bloke.

If anyone happened to have been fishing on the Shropshire Union Canal beneath Golden Nook Bridge in Hargrave earlier this month they might have hooked more than they bargained for.

A local lady in her 40’s (who suffered only minor injuries) managed to roll her Mini and land it smack in the middle of the cut. Aside from the fact that the lights remained on – which speaks volumes for the German electrics – the incident has provided the opportunity for a serious time-saving tip for any local matchmen.

Should anyone draw that particular swim in the next few weeks, then rather than go through the rigmarole of plumbing the depth, simply buy a Mini, jump on the roof a couple of times to flatten it, and then measure your rig from the floor to the ceiling.

Hey Presto! You can roll into your swim with seconds to spare and drop your rig at dead-depth down the track!