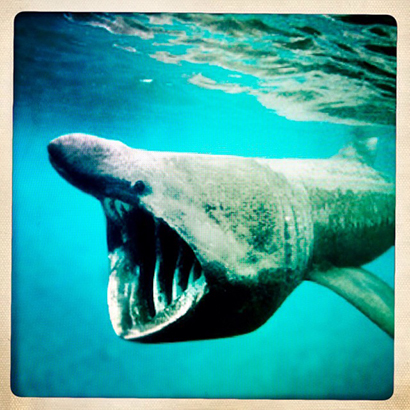 ‘Giant Killer Shark off Prestatyn!’, ‘Great White at Weston!’, normally accompanied by a photo of a slightly droopy dorsal fin poking through the waves.

Though there is evidence of great whites in British waters (more of that in a future Bits and Pieces), the sightings that are sparking panic are inevitably of basking sharks (Cetorhinus maximus).

In fairness, catching a glimpse of the second biggest fish that swims (only the whale shark is bigger) is a sobering moment, and there is a certain menace in the way they move. The basking shark is a plankton eater, and drifts slowly beneath the surface (with the dorsal often exposed), mouth agape and gills flared as it filters through 2000 cubic metres of water per hour.

They are migratory, moving into the north Atlantic in the summer months, and grow huge. A typical adult measures between 20 – 25 feet in length, but far bigger fish have been recorded. The largest authenticated specimen was accidently caught in a herring net off Canada in 1851. It measured just over 40 feet in length and weighed around 19 tons. Just a small portion of chips with that thank you.