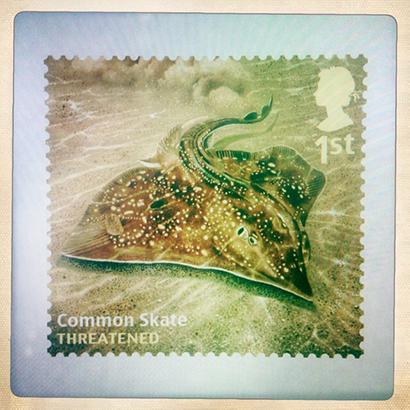 It is slightly tragic that the ‘common’ skate (Dipturus batis or Raja batis) was, in 2006, listed as a critically endangered species. Once widespread across the North Atlantic Ocean and Mediterranean Sea, over fishing has decimated the population. They are long lived – a female only reaches sexual maturity at eleven years, and is subsequently fertile only once every two years. Such limited breeding is compounded by latter stage of the process, whereby the female lays around forty eggs (mermaids purse) in the sand or mud. The embryos then take as long as five months to hatch, in which time they are vulnerable to predation and disturbance from commercial fishing.

The role of the angler now plays an important role in the conservation of the common skate. The capture, tagging and release of fish in the north-west of Scotland (see Places we Like) enables Scientists to monitor growth rates and movements of this, one of the largest fish in British waters.