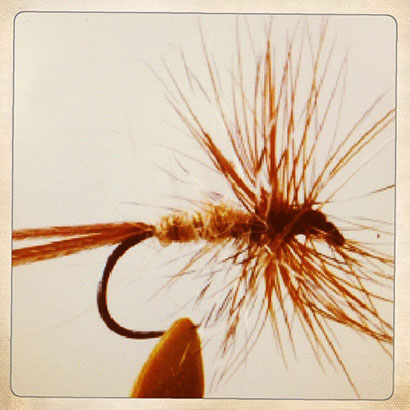 Not many flies have a story quite like the dogsbody… Legend has it that a fishing farmer local to Usk in Monmouthshire, was sent a new pattern that he couldn’t replicate. He took it into the local barber, Harry Powell, who was also a fly-tier, rod-builder and founder of Sweets Fishing Tackle (see Places we Like).

Powell was initially stumped – as the colour of the main body of the fly was not one with which he was familiar. He then spotted the farmer’s dog, and noticed the colour of its back. A quick snip of the scissors and a few turns later and the dogsbody fly was born!

Whether true or not, the pattern is still tied to this day and works well as a general purpose fly on running and still water.

One wonders what Harry Powell’s original must have smelt like after a few casts. After all, there’s nothing quite like the waft of wet dog….