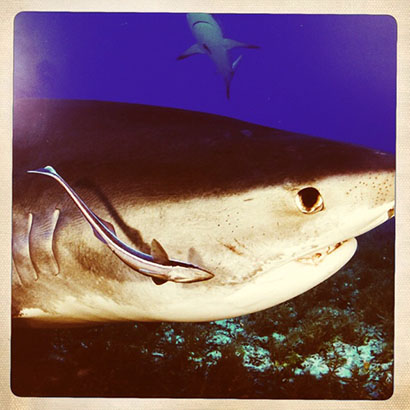 One, oft quoted statistic, tells us that we are more likely to be killed by a falling coconut than a shark. This is of little consolation to a Galeophobic however, and frankly, most of us would rather take our chances lying in the shade of a coconut tree than go paddling with a great white.

Some creatures however, actually choose to swim with sharks on a daily basis.

Black and white striped pilot fish (Naucrates ductor) regularly swim with sharks, rays and turtles – species that might normally make a meal of them. This is a symbiotic relationship however – the pilots keep the sharks free from parasites while remaining safe from other predators.

Taking it one stage further are the remoras of the family Echeneidae, whose first dorsal fin takes the form of a disc with which they attach themselves to a host species. Again, they will keep the shark free from parasites and are even more dependant than the pilot fish as they lack their own swim bladder.

Rather them than me…..