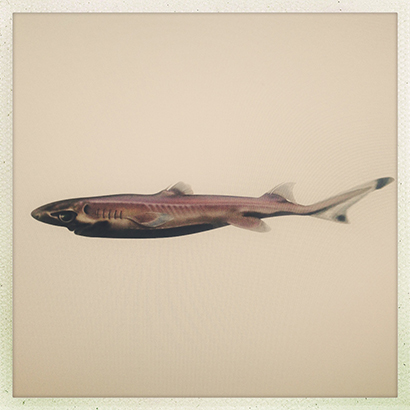 Only one fish can follow a shark that grows to 20 feet in length, and that is a shark that doesn’t grow more than twenty centimetres….

The dwarf lanternshark (Etmopterus perryi) is widely regarded as the smallest shark species in the world. It is also one of the least known, with a small population only thought to occur on the Continental Slopes off the coast of Venezuela and Colombia.

Though not targeted deliberately, a few of these fish do turn up as bycatch to local fishermen and it was the result of a trawler catch of 1964 that brought the species to the attention of Scientists worldwide.

The fish is part of the Etmopteridae family of lanternsharks, all of which are small in size and relatively unstudied. One of the more curious features of the dwarf lanternshark is the presence of photophores around the vent. These are more familiarly found on some species of squid, or the tip of an angler fish’s lure – quite why a miniature shark needs to light up its backside is open to argument….