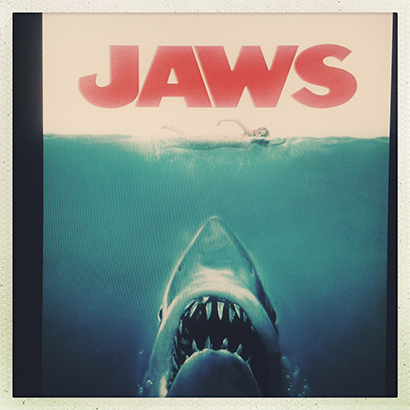 Based upon Peter Benchleys’s 1974 novel of the same name, Jaws celebrates its fortieth birthday this year. Winning three Academy Awards, the film was an enormous success, but despite being commercially and critically acclaimed, the depiction of the great white shark as a man-eating monster has not helped the species’ true identity.

Director Steven Spielberg (who, perhaps surprisingly, was not nominated for a Best Director Oscar for the film), built a level of suspense through some innovative camera angles and the use of a tense but distinctive John Williams soundtrack.

The lead roles were solid, with a stand out performance from Robert Shaw as the Captain Ahab inspired Quint, but the real star was the shark and the special effects that brought it to life.

Perhaps the representation was too real, for the tagline You’ll never go in the water again was taken a little too literally. The great white shark became regarded as a man-eater, and the frankly ridiculous anthropomorphic fish that appeared in the sequels (that bore grudges and followed aeroplanes) was dangerously uneducated.

Still, the original is and deserves to be a classic.