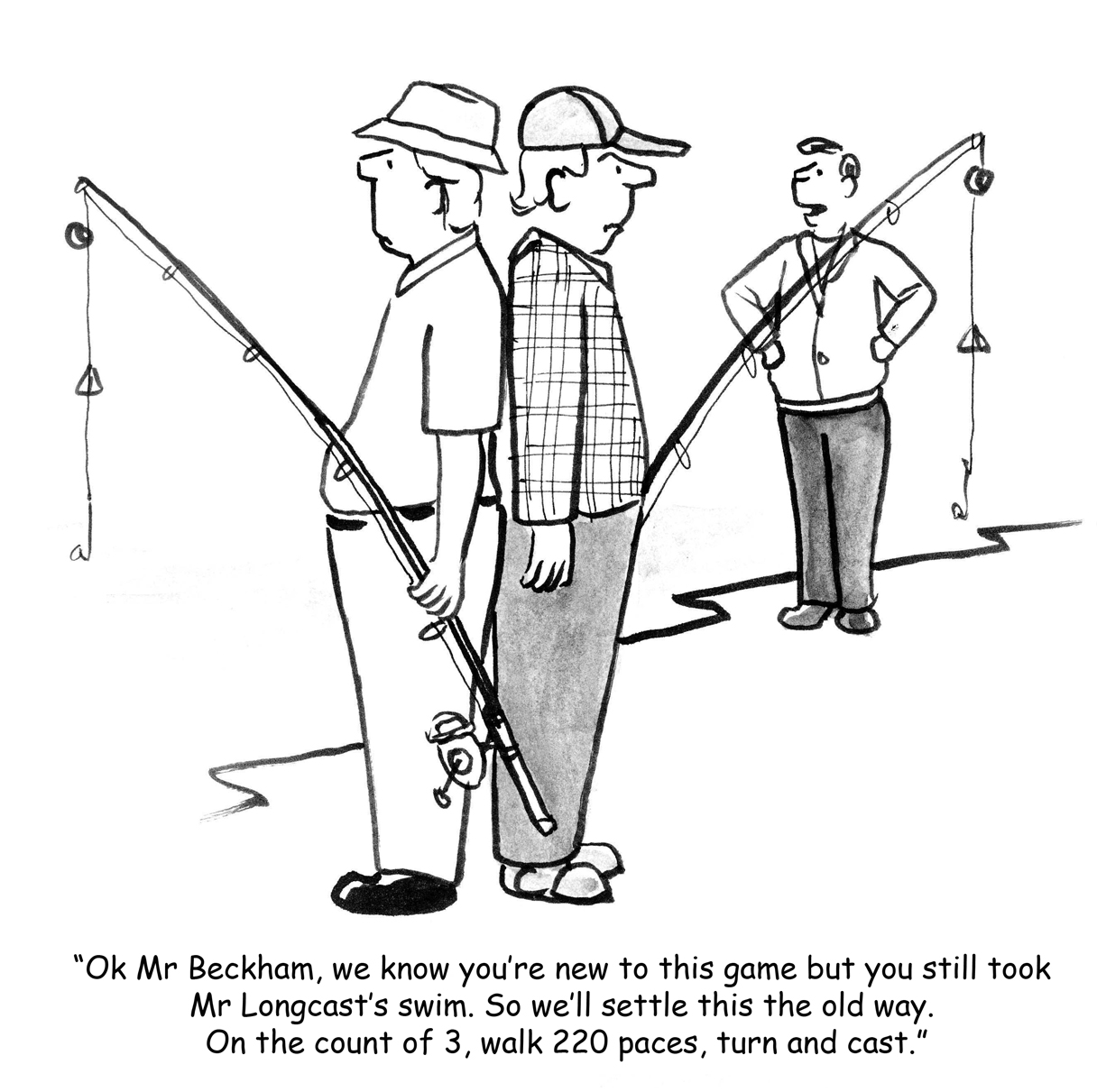 I’ll have a Becks with that…

The Beckham family went to Iceland this month—presumably to stock up on frozen food before their holiday, which was, coincidentally, to Iceland.

They published a few holiday snaps, and while most of the world was obsessing about a picture of Victoria kissing daughter Harper ON THE LIPS, some of us were nodding in appreciation of David showing off a salmon he had (presumably) caught.

It was a nice fish—not huge, but fresh and silvery. And Goldenballs looked the part too, cutting a dash in chest waders, matching woollens and a cravat. Mind you, Becks would make Fishpool’s tatty old fishing coat look debonair.

His Instagram image was simply titled ‘Good end to a great day’, but that provided sufficient information for more than one journalist to spin a story out of.

Which is pretty much what Fishpool has just done…

Any Torbay anglers making the most of the recent warm weather may have seen more than just their rod-tips jiggling. Torbay Sun Club, which is, according to their website, one of the UK’s largest naturist ‘swim and sauna Clubs’ (Fishpool is thorough in his or her research), organised a ‘nude cruise’ for a late July evening. It proved popular, and the local papers reported ‘squeals of laughter’ as the Sun Club chugged their way around Torbay.

Local made-up angler Ivor Longcast had visited the coast for a spot of mackerel fishing, with the hope of a bass as the light began to fade. He was hugely shocked by the spectacle he unwittingly became witness to, and told Fishpool, “There I was, minding my own business, when a boatful of naked people appeared. I didn’t know where to look—until I spotted Mavis from number 74 in the top deck. Then I knew exactly where to look… it was disappointing when they went round the headland, but I still worked my feathers hard for the next ten minutes or so…”

A young bottlenose dolphin that stranded itself in the Moray Firth back in May seems to be recovering well, despite having suffered severe sunburn.

The cetacean, a female known as Spirtle, was thought to have been out of the water for 24 hours, and took a scorching that looked to be life-threatening. Having been found by chance by a couple who themselves had got lost, Spirtle was returned to the water and the recent sighting suggests there is no infection and the skin should continue to repair.

Dr Andrew Brownlow of the Scottish Marine Strandings Scheme described the discovery and recovery as ‘a miracle’, while Spirtle was reported to have said, “Click click click clllliiiiiickkkkkk!!!”—dolphin for “where the hell did I leave my Factor 50?”

NASA’s latest and ongoing mission has seen them head them head in a slightly different direction to what we might expect. Nasa’s Extreme Environment Mission Operations (NEEMO—how fortuitous an acronym) has this month seen the deployment of a crew of aquanauts to the undersea base at Aquarius Reef—off the coast of Florida. The seabed here is believed to present similar challenges to those that astronauts might face on Mars, and the current mission will see the testing of tools and equipment.

Had Fishpool spoken to Reid Wiseman, member of the crew, he might have said, “I’ve always wanted to be under the Sea, in an Octopus’s garden—but safely away from direct contact with the Sun’s harmful UV rays…”

Crawling up the Walls

Okay, so it may be a story from March, but Fishpool is notoriously behind the times and sometimes the only pulse I have my finger on is in a lentil salad.

Nevertheless, it is exciting to read of a new fish species, discovered in a cave system in deepest Thailand.

In a report posted and co-authored by Brooke E Flammang, it is noted that:

The vertebral column in the sacral area has large anterior and posterior zygapophyses, transverse processes, and broad neural spines, all of which are associated with terrestrial organisms.

Words that echo almost precisely Fishpool’s own thoughts (ahem). But having looked at the pictures, it appears that Brooke is explaining exactly how this fish (Cryptotora thamicola) uses its fins to walk like a terrestrial animal. Which really is quite impressive.