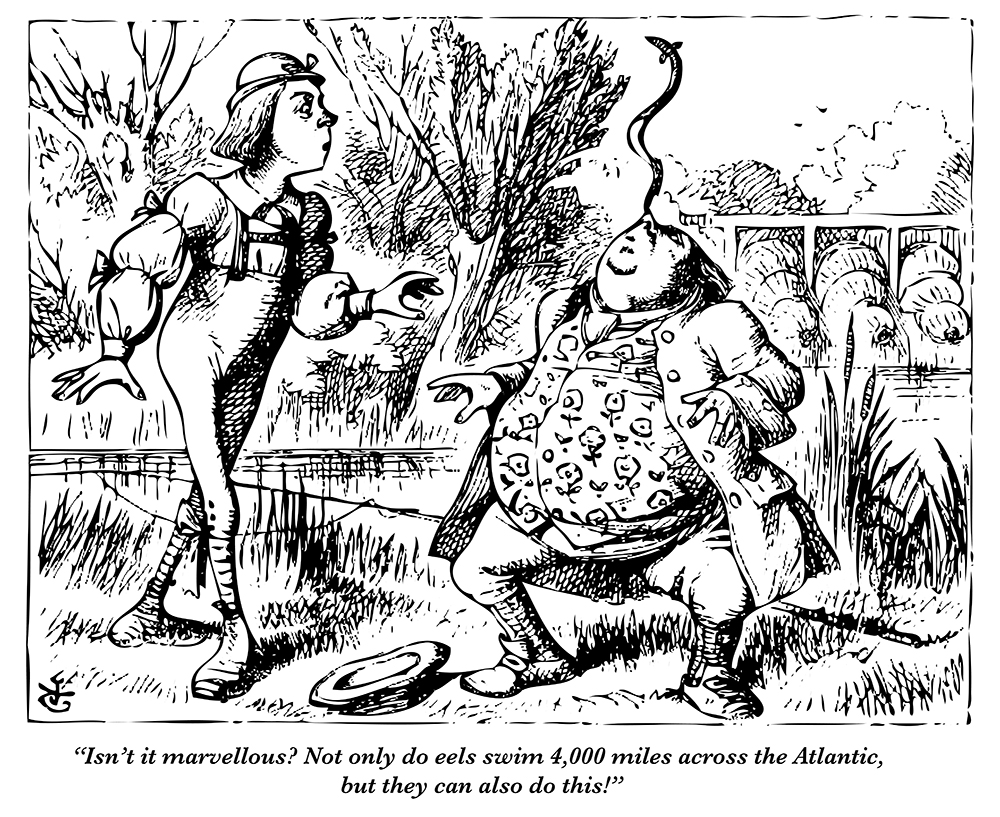 It’s always nice when the media grab the wrong end of a stick and jump on a story that isn’t quite what it seems.

To be fair, ‘Bermudan eel in West Bromwich’ is exactly what editors crave to fill some column inches, and the story itself does not make any false claims, it’s just slightly skewed.

Basically, following a pollution incident on the Ridgacre Branch of the Wednesbury Old Canal in the West Midlands, workers from the Canal and River Trust rescued a 5lb 10oz eel. Now, that’s a hefty specimen, especially for a canal, but when John Ellis, from the Trust, commented on the discovery, the press seemed to get carried away with Anguilla anguilla’s (admittedly extraordinary) life cycle.

A BERMUDAN EEL! Er, yes – as is typical of the species, the eel arrived in British waters from the Sargasso Sea as an elver.

BUT IT’S RARE! Yes, sadly, the eel has declined massively over the past few decades. IT’S IN WEST BROMWICH! Now that is odd….

What a load of Carp!

Fishpool heard a lovely story recently. Some chap fishing a lake in deepest Shropshire hooked a previously uncaught carp. It was a whopper – the biggest ever – and the carp world rejoiced and marvelled at the wonder of it all.

At least that is how it would have happened were it not 2016. A year that, as some quick-witted Twitterer pointed out some months ago, has clearly been written by George RR Martin.

So instead of back slapping and hurrahs came alleged death threats and a level of mud slinging that made Prime Minister’s Questions look like a John and Yoko bed-in.

And let’s face it, the captor did absolutely nothing wrong – he paid his money and caught a big fish. And he even smiled in the photographs.

But for many (Fishpool included), the history of the fish leaves a rather unpleasant taste. A carp that was (quite legally) imported when already nearly 40lb and then fed a daily diet of ‘2 kilos of boilies and 2 large scoops of pellets’, until, having gained more than 11lb in six months, is moved into the Avenue lake where it is caught within a week or two.

Yes it is the biggest carp caught in Britain on rod and line, but to call it a ‘record’ does rather devalue the benchmark to which many anglers measure their own achievements.

The king carp is not a native species, and many big fish reside in waters where they were not spawned. But they have dodged the beaks, claws and teeth of predators and have rooted through silt for bloodworm and snails. Their weight and condition may be influenced to some degree by the presence of unnatural anglers’ baits but they have not been fattened up like a Christmas goose.

When the first whispers emerged, Fishpool read a couple of wishful posts on social media. People suggesting that a great forgotten Redmire monster had finally been hooked. And while the Redmire fish were from a specially selected stock, the very thought that there might be an unknown fish four feet long tucked away into those few small acres is what fishing is really about. Take away the mystery and there ain’t a lot else left…

We humans are a fickle lot. We take it upon ourselves to play God with the natural world around us and look to rescue species in trouble only to panic when they begin doing well.

Buzzards, red kites and badgers have all thrived with some protection, but suddenly there are too many and we simply must control them. Beat them down again and put them back in their place. Those pesky buzzards are eating all of our songbirds, red kites are hunting pets, and badgers are taking all our jobs, sponging our Benefit system and destroying the NHS.

Meanwhile, otters are now present in every county, as many anglers are only too aware, and in some minds they are as welcome as a hungry perch at Mr and Mrs Gudgeon’s tea party.

In the long term, our rivers, if healthy, will happily balance against the presence of otters, and the territorial nature of the males will keep populations well spread. Of course, this is of little consolation to anglers fishing rivers such as the Great Ouse or Wensum where barbel in particular (having no instinct to dodge the otters) have been almost wiped out.

Our stillwaters are slightly different however, not least in the fact that many are privately owned and vital sources of income. A thirty pound carp might be 50 years old but is easy prey for an otter.

How positive it has been then to read of such proactive efforts made by the UK Wild Otter Trust, the Angling Trust, the Predator Action Group and various individuals in response to the increasing anxiety. As a result of a huge amount of time and negotiation, Natural England have granted the first licence enabling the trapping and removal of otters from within fenced fisheries. In a world where most arguments begin at opposite poles and eventually reach a compromise, that common sense middle ground has, in this instance, already been met.

There will be plenty more stones to turn in this argument, but in the meantime – Bravo, gentlemen. Bravo.