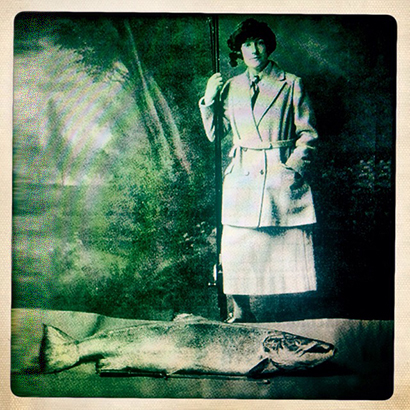 October 7th 1922 was somewhat productive for Miss Georgina Ballantine. Fishing the River Tay (see Places we Like) near the village of Caputh in Perth and Kinross, she had already taken salmon of 25lbs, 21lbs and 17lbs when her silver minnow lure was taken once more. Safely hooked, the salmon took off on a ferocious first run of 200 to 300 yards, with Georgina’s father, and boatman, rowing hard to keep up.

Miss Ballantine later described the ensuing fight is ‘Homeric’, and after more than 2 hours and in the pitch dark, the monster that came to shore was worthy of a place in Greek legend.

This was, and remains, the biggest salmon ever caught in British waters. A cock fish weighing 64lbs, and measuring 54 inches from nose to fork. The girth was a staggering 28 ½ inches (only an inch or two short of Fishpool’s waistline….ahem… ).

As a fine postscript, the salmon was donated to Perth Royal Infirmary, where patients and staff enjoyed a feast of fish. Miss Ballantine, meanwhile, has her name firmly etched in angling folklore.