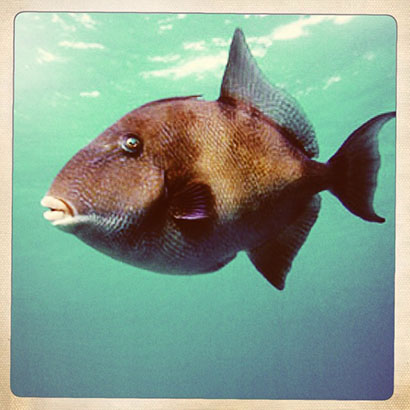 Prior to the turn of the century, the occasional appearance of the grey triggerfish (Balistes capriscus) in British waters was major news. Today, with the sea temperature rising year on year, there are areas along the south coast where triggerfish can now be targeted in great number.

So named after their spiny dorsal fin which ‘shoots’ up as a means of defence, the grey is one of around forty species of triggerfish found in our Oceans. The bulk inhabit tropical or subtropical water, and all tend to frequent shallow areas where they feed on shellfish and crustaceans. They have small but powerful jaws, designed for crunching through the shell of their prey and are known to fire a stream of water into sand in order to expose potential morsels.

If targeting triggerfish, anglers should consider the conservation of the species over the culinary aspect, and ensure that strong hook patterns are used to counter those vice like teeth. The south coast remains the most likely area to find them, but fish have been found as far north as the Hebrides.