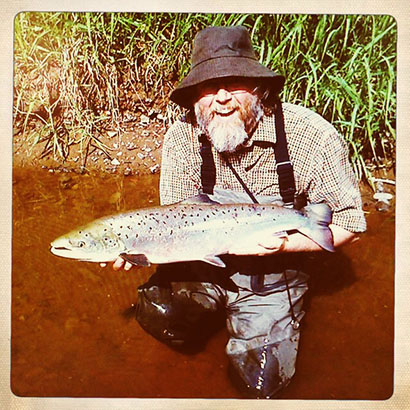 Steve Roberts was born within casting distance of Old Father Thames, where he spent a halcyon boyhood catching perch from beneath wind ruffled willows. He evolved as an angler on the idyllic river Kennet, where he chased barbel among the thick, waving fronds of ranunculus.

Having caught his fill of whoppers the lure of spring salmon took him onto the beats of the River Wye, but his early memories remained strong, and the draw of his childhood haunts always called him home.

He now has two boats on his beloved Thames, imparting with boyish enthusiasm the delights of classic weirpool fishing to clients who seek his River Days guiding service, (see Things we Like), but you’ll also see him regularly on the banks of the Loddon, Wye, and his “little bit of heaven” on the Kennet (occasionally from the whirl of a coracle).

Having written for various magazines and societies Steve now regularly contributes to Fallon’s Angler in his Angler For All Seasons series… and likes to journey to the riverbank in a 1950’s side car outfit. He always wears a hat.