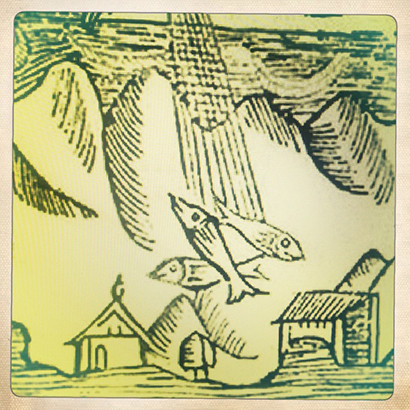 Hallelujah! – Its raining fish! …and so on – it sounds crazy, yet this is a very real phenomenon. In 2004, villagers in Knighton, Shropshire, were pelted with minnows during a particularly heavy downpour, while in 2000 Great Yarmouth was peppered with sprats.

It may not be an everyday occurrence, but there are similar examples throughout history and throughout the world. It isn’t just fish either – showers of frogs, toads and worms have all been recorded. The popular and most plausible theory is that a waterspout or whirlwind can suck up numbers of small animals, before hurling them around the clouds and returning them to earth with the next heavy fall of rain. There may be a distinct lack of witnesses to such an event, but, in fairness, were a whirlwind or waterspout bearing down upon you, then your first thought is unlikely to be whether any small fish or invertebrates are being sucked skyward. You would run or hide. And hope that it doesn’t start raining cats and dogs….