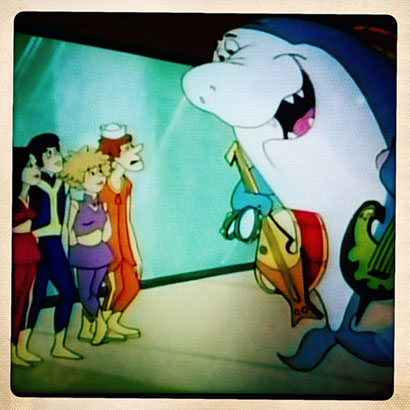 Fishpool was in a glorious state of reminisce earlier in the week – and was suddenly struck by the mental image of a drumming great-white shark.

For anyone else who may have forgotten, The Neptunes are a band from the future. Purveyors of ‘rock’ music, they are a five-piece, made up of teenagers Biff (guitars), Clamhead (bass), Shelly (percussion and vocals) and Bubbles (keyboards), alongside the fifteen foot great white shark Jabberjaw (drums).

With a distinctly Scooby-Do edge, The Neptunes spend their lives touring their underwater world and solving mysteries as they go. Jabberjaw is forever encountering prejudice in a society where great white sharks are, perhaps understandably, feared. He often gets ejected from venues, and despite being having the ability to talk, walk (on his tail) and breathe air, he struggles to convince people that he isn’t going to eat them. With an element of self-pity, Jabberjaw finds regular opportunity to utter his catchphrase – the somewhat uninspiring ‘I don’t get no respect’. But every episode (there were 16 in all) ends well and we are treated to some inspiring Neptunes classics while the credits roll…If you don’t remember it, feel free to dig out an episode – but in all honesty, Fishpool has told you all you need to know..