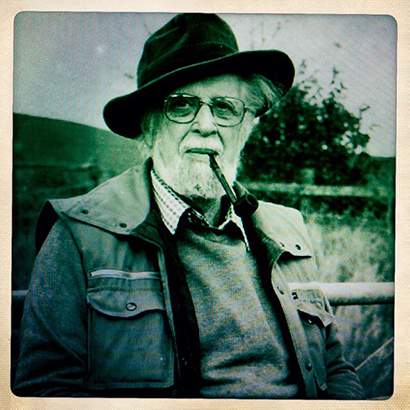 Though his family roots were in Yorkshire, Jack Hargreaves was born and raised further south, near Aylesbury in Buckinghamshire. An interest in radio led to him building a reputation in the world of broadcasting, and in the Second World War he was recruited to the staff of General Montgomery—charged to set up radio communication between the allied forces during D-Day.

After the war, Hargreaves continued his broadcasting, while also turning his hand to writing and editing. In 1959 he joined the newly formed Southern Television franchise and first appeared on our screens that same year, fronting Gone Fishing—a dream job which allowed him to explore and demonstrate his love for angling.

In the early 1960’s, having moved to Lymington on the edge of the New Forest, Hargreaves began broadcasting his most familiar work.

Out of Town ran for nearly twenty years, offering a wonderfully gentle-paced look at countryside life, including, of course, the odd bit of fishing. For many of us the theme tune (see Things we Like) formed the soundtrack of our youth, and though Hargreaves was noted for other television series (including How and Old Country) it is as a pipe smoking Out-of-towner that we best remember him.