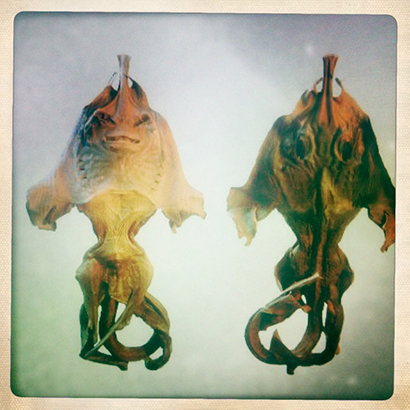 For centuries, sailors and fishermen in the Belgian port of Antwerp would amuse themselves by playing around with the dead bodies of rays and skate (see Fish we Like). Though this might conjure up seedy and unwanted images, be assured that Fishpool would never stoop to discuss the popular tales of lonely fishermen ‘engaging’ with their catch. The reality, though far less sordid, is peculiar nonetheless.

By carving and manipulating the dead fish, and then drying and varnishing the resultant forms, the fishermen created ‘Jenny Hanivers’. These were then sold and occasionally displayed as mermaids or sea monsters. The English name comes from the French term ‘jeune d’Anvers’, (the literal mispronunciation becoming Jenny Haniver), and the creations became highly prized. The human-looking underslung ‘face’ of a ray would certainly lead to deception and confusion, particularly as they would feel natural to the touch. They must have whiffed a fair bit too….