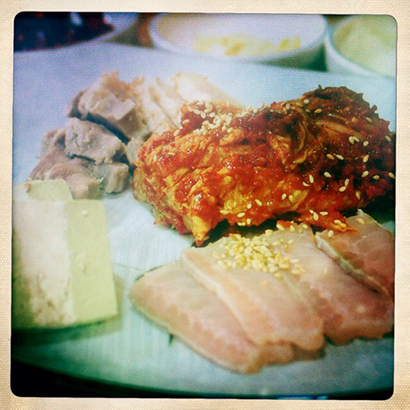 This talk of smelly rays and skates (see Back of the Shed) leads us neatly, if a little discriminatory, to the cuisine of Korea.

Unlike most animals, all species of skate (see Fish we Like) do not urinate, but instead excrete uric acid through the skin. This acid, upon fermentation, turns into ammonia which then acts as a preservative, meaning skates could be kept longer in the days before refrigeration. Of course, in these modern days of refrigeration, the skate is deliberately left outside in order to become a popular delicacy.

Hongeohoe is traditionally made by sandwiching layers of fish between hay, which is then left in clay pots to ferment. The resultant food is then served to diners in thin slices, and despite the fact that it must smell worse than the toilets at Glastonbury Festival, it is very popular.

Hmmmm – I think I’ll stick to Korean meatballs – as comedian Hugh Dennis once remarked, they really are the dogs b#ll#cks……