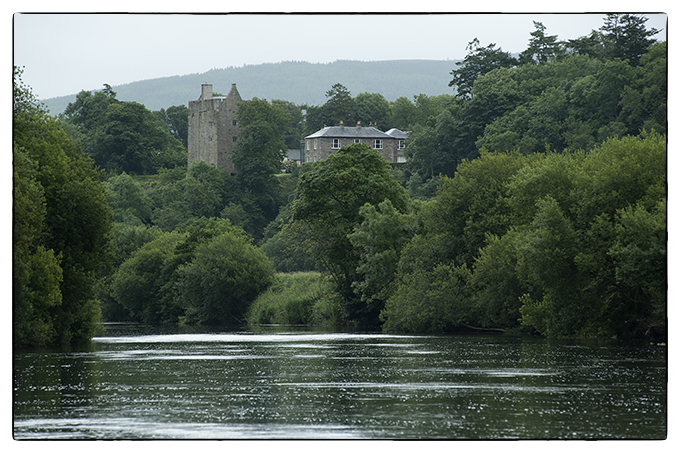 “May the luck of the Irish be with you!” is a well-known Irish blessing. I’m not sure of its origins, seeing as I don’t remember being especially lucky at any time, if you discount meeting a lovely lass and marrying her, and having a wonderful child. I’d like to think those things happened because I was a nice enough fella to deserve it, but feel free to object.

I instead look at this blessing as a reflection of the good nature of my countrymen, the same thing as “Cead mile failte”, the way you’re greeted in a bar, especially when you walk into it with a wallet full of money. “A hundred thousand welcomes to you”. We are nice people, we enjoy the craic. Hell, we even have our own word for it. So, we’re a friendly bunch, but are we lucky?

I am certainly lucky in that my late Uncle Padraic, who was exceptionally kind and generous, owned the fishing rights to a fine stretch of the Cork Blackwater that has a significant run of salmon. I also have the good fortune to be still allowed to fish it by his lovely family, who now run it. But if you know me, then you’ll know that I had never caught a salmon before, and this bothered me. If I really was lucky, then I surely wouldn’t have blanked until now? Last year, along with three fishing friends, we flogged that bloody gorgeous river every which way—fly, spinner and worm—and caught not a sausage. We had landed in the driest spell of weather in 15 years, and we could see the water level dropping in front of our eyes as the countryside shrivelled and dried up. I also fished the Conon in Scotland many years ago; shirt and brand new tartan tie, tweed jacket, the flat cap and barbour jacket—so I at least dressed the part—but didn’t catch a bloody thing, except for a “wee brun troot”. There were salmon everywhere, but critically, the water was again low and they weren’t moving, so many people blanked. But the frustration of casting a line from the middle of a gorgeous river and seeing a 20lb salmon jump right in front of me left me thinking that luck wasn’t on my side when it came to the silver tourist. If anything, I was falling foul of Murphy’s law; “If anything can go wrong, it will go wrong”. Lovely rivers, full of salmon, with me catching nothing but the branches of a tree.

Of course, it’s generally agreed that Murphy’s law isn’t Irish at all. It was named after Edward Aloysius Murphy, Jr, who was an American aerospace engineer, who (given his name) may well have had Irish heritage, but the law is merely a renaming of sod’s law. There isn’t a Mr. Sod that I know of, though he may well exist, somewhere, and may well be unlucky. But there are plenty of Murphys in Cork, one of them giving his name to a fine stout, so I’m thinking, “They like their bad luck so much in Cork that they named a stout after it.”

Caught in this whirlpool of doubt, I returned to the Blackwater, not exactly full of hope, but unsure of what the river held in store. Michael, the head ghillie advised that instead of the fly, I fish the Flying C, and pointed me in the right direction, and within 10 minutes I had caught my first salmon, a ‘peel’ of around four pounds. It was suitably silver, fought well and stayed deep, and glistened blissfully. My luck was in. I’m feeling like a salmon angler. 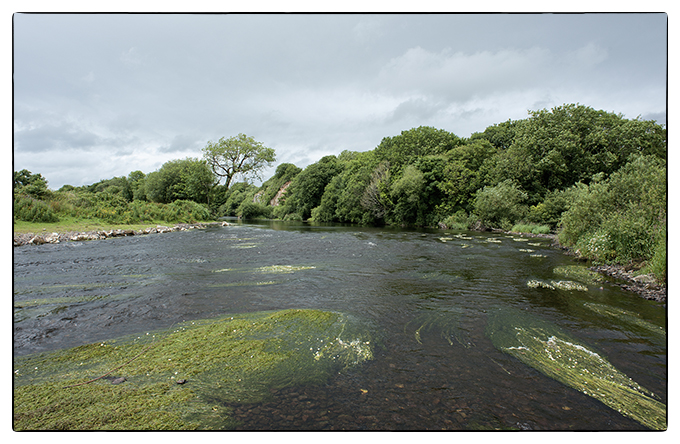 The top of the beat

“Git de bait out agin” said Michael in his melodic Cork accent. “Were der’s wan, der’s two”. And so I did, and two casts later I had my second ever salmon, this one fighting up in the water and even leaping several times. I was in heaven. My luck was definitely in. I’m bloody Hugh Falkus.

We strolled back to meet the others, and my beaming smile told them I was successful long before I told them with words. I was feeling very lucky indeed and they were pleased with my success. Thank heavens there are no betting shops on the bank of the river. They hadn’t been so lucky so they took both ghillies, and I fished on my own behind the gorgeously ramshackle fishing hut, where a small side stream tumbles into the river and creates a long, tempting pool. They had of course already fished this spot, but at this stage I didn’t care if I ever caught another salmon or not, I was in Nirvana. 10 casts later and I was into another fish, with not a soul around, and just as it was ready for the net (which I didn’t have) the others appeared. They were gobsmacked. Georgina Ballantine eat your heart out. Yeah they were small fish, but they were salmon. Real salmon.

The remainder of the day went by in a haze. I rested a lot, took in the scenery with a sense of calm I have rarely felt before, loved every minute of it. At one stage I even lay down on the grass with my feet in the river and the warm afternoon sun sent me gently off to the land of nod. Then we finished off the day with several well-deserved pints of that Murphy’s stout with the luck of the Irish on the tips of everyone’s tongue. 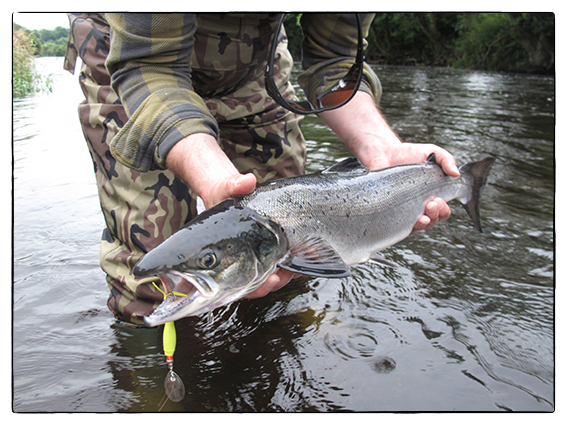 I knew luck was on my side, but I also felt karma was at play, if indeed there is such a thing. I had only recently been travelling back and forth from Ireland to say goodbye to people whose lives had come to an end. It was an intensely sad period of time, and I thought that perhaps I even deserved my sudden good fortune. More fool me.

The following morning, we were preparing to leave for the river when one of our group tripped and fell, and banged his head, gashing it in a bloody way that looked much worse than it actually was, but which heightened the sense of emergency. It was completely out of the blue, but it meant that only two of our group made it to the river while myself and the injured party headed to Cork hospital. He was my guest, so my responsibility. 10 hours later we were back, with my guest bruised and slightly battered but none the worse for wear, but with a day’s fishing gone without casting a line.

That was also the last day it rained, the weather remaining dry for the remainder of our stay, while the fishing moved from hopeful to eventually hopeless. We didn’t see another salmon, those three from the first morning remaining our only success, but what a morning that was. While I thought about my salmon, I was constantly reminded about my good fortune by the fine pair of black eyes that were developing on the face of my injured friend. It was even suggested it may have been my fault for having had such a good first day! The luck of the Irish had rained down so generously on my shoulders that Murphy’s law jumped out from behind the rocks and bit him on the arse.