By Garrett Fallon on November 12, 2016 in BIG FISH, FALLON FISHES 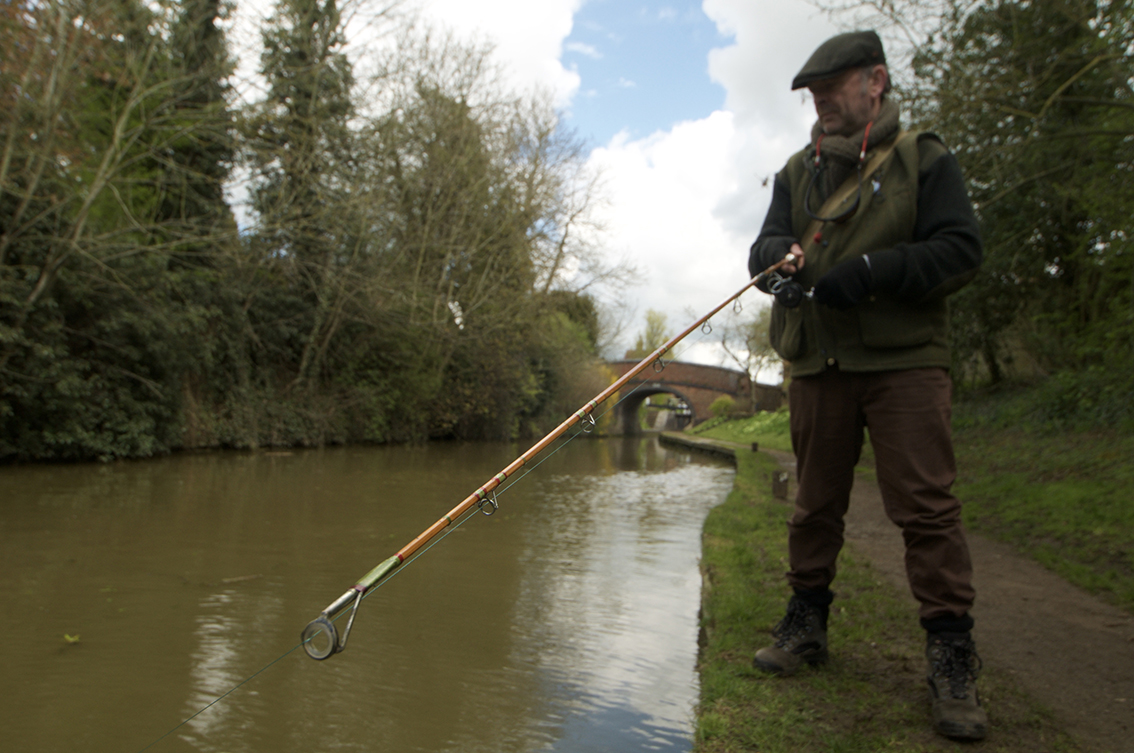 Old but not obsolete, the Hardy Wanless

I have long entertained a penchant for old fishing tackle. Collecting it was a hobby of my late father’s, though as a determined wordsmith, he was mainly interested in rare fishing books. Nevertheless, his office was stuffed with all manner of angling ephemera, mostly gathered from house auctions that proliferated the Irish midlands in those pre-internet days.  I particularly remember his joy at discovering a rare Hardy fly reel that he subsequently resold for £1000, and that in the 1980s. His wine collection grew suddenly in quality, an enjoyable but temporary state of affairs.

Old fishing tackle has always held a curious mystery for me. Its quality stood out from the proliferation of plastic. The obvious craftsmanship felt good to hold in the hand, and the mind wandered and wondered at the journey it had taken to be there. What had it caught? Who had used it? Perhaps there was an element of buried treasure about it: the brass trimmings; the polished wood; for what pirate has ever dug up a box of lego? No, any budding Jim Hawkins surely dreamt of silver and gold, and when I handled a Hardy Uniqua for the first time, the obvious craftsmanship meant it was ooohed and aaaahed over as if it was the lost treasure of Long John Silver himself. 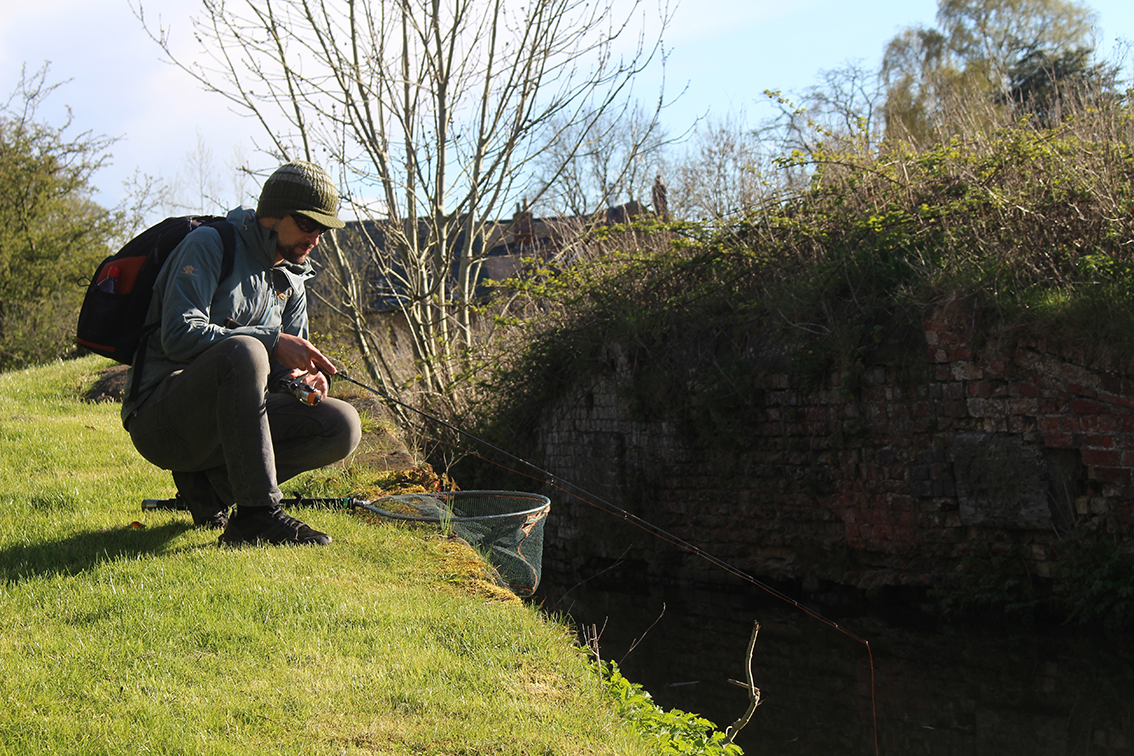 Dominic Garnett tickles a lure through a suitable swim 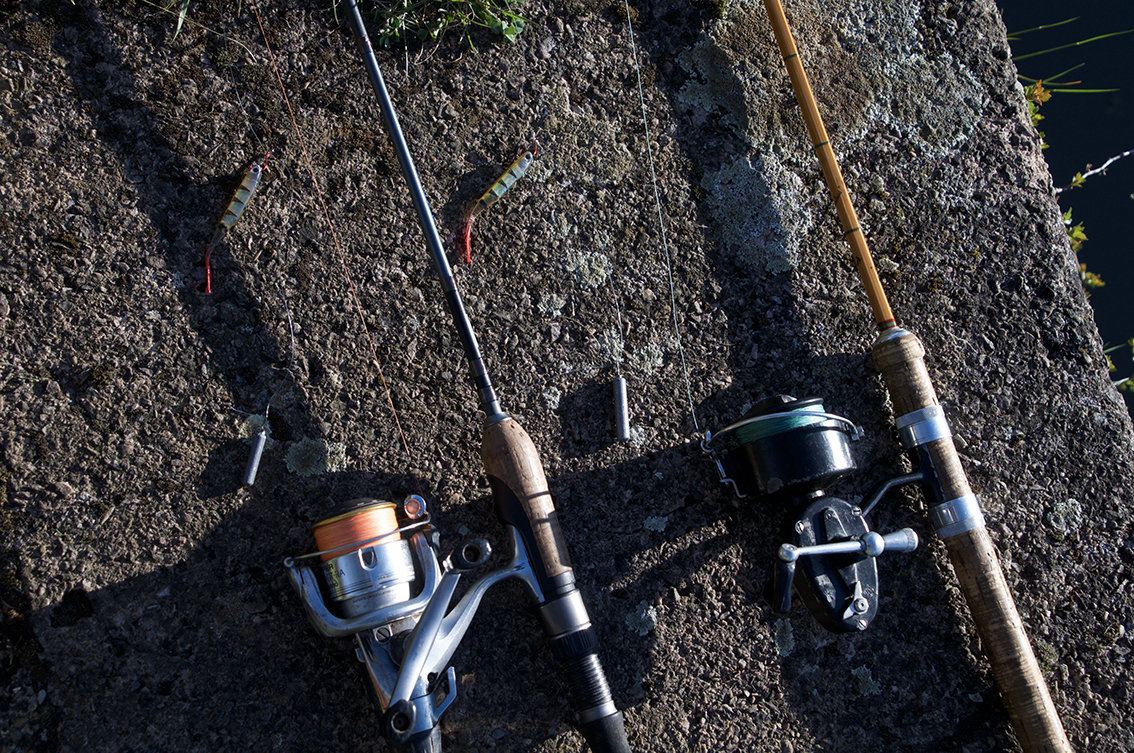 Yet, while my father held great respect for the past, he wasn’t overly romantic about just any old fishing tackle. He was a practical man, and as much as he enjoyed having beautifully made items around him—just ask my mother—he narrowed his addiction mostly to fly reels (because he could use them), and remained stubbornly unsentimental about rods (because we broke them). He tended to fish with models that could survive the rough-and-tumble of trudging around boggy fields, over barbed-wire fences, away from chasing bulls and of being shoddily manhandled by several irresponsible sons.

So fittingly, as I grew up (all too fast, as I look back), I learned that just because something was old, didn’t mean it was obsolete. Over time, the term ‘vintage’ gradually replaced the ageist brutality of ‘old’. The Oxford English dictionary describes the word ‘vintage’ as meaning (once you get through the references to wine):

“The time that something of quality was produced.” 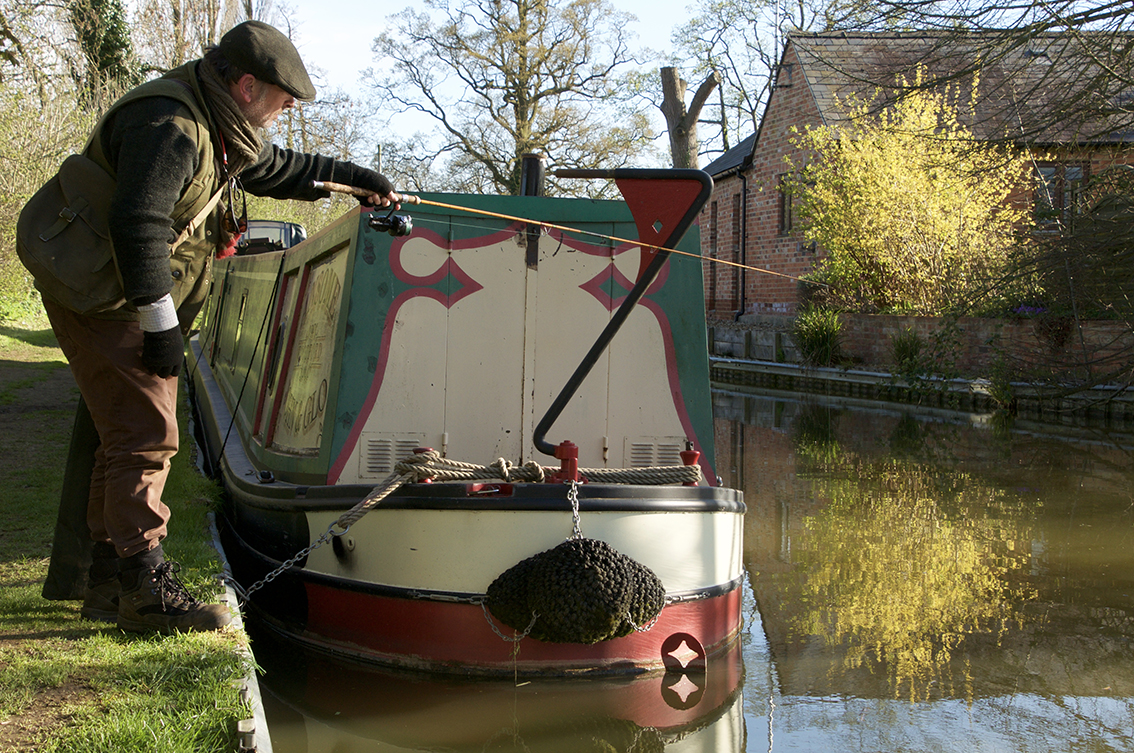 This term so easily sat alongside the beautiful books and the collection of Hardy reels, and made sense to me, even as a young lad, but I don’t collect. Not really (I try and convince myself). What vintage fishing tackle I have is only for coarse fishing, while my fly fishing and sea fishing gear is all disturbingly modern. With the exception of one of Bernard Venables’ old reels, I only have what I need to fish—a number that is admittedly growing, slowly. But I enjoy stretching my angling to a point where another rod is (perhaps) necessary, when what I already have just doesn’t quite fit the bill.

One such occasion was jigging and drop shotting on a canal with Dominic Garnett. All the canal predator hunting of my youth was carried out with traditional spinning gear: glass rod, Mitchell reel, floating lures or whatever suited the colour and depth. But jigging and drop shotting were new to me, and I had nothing suitable in the rod room. So I borrowed a Hardy Wanless from a friend and teamed it with a Mitchell and tried not to make a fool of myself.

Anybody who fishes with Dominic Garnett will know that he is one of angling’s  original thinkers. His sharp mind is constantly innovating, but his face couldn’t hide the mirth when he first saw my setup. We both giggled as I ran the braid through the rod rings then attached the incongruous rubber psychedelic dancing lure on the end, like hanging some fluffy dice on the rear-view mirror of your Rolls Royce.

But of course the rod and reel cast beautifully. It might have been a wee bit heavier than the tiny rod that Dominic was using, with less touch in the tip, but it was difficult to gauge which setup was more effective as neither of us caught anything for a fairly freezing first few hours. Starting with jigging, time and again we flung our lures into every likely-looking spot but to no avail, the only distraction being a herd of canoeists paddling themselves out of their Saturday morning hangovers. 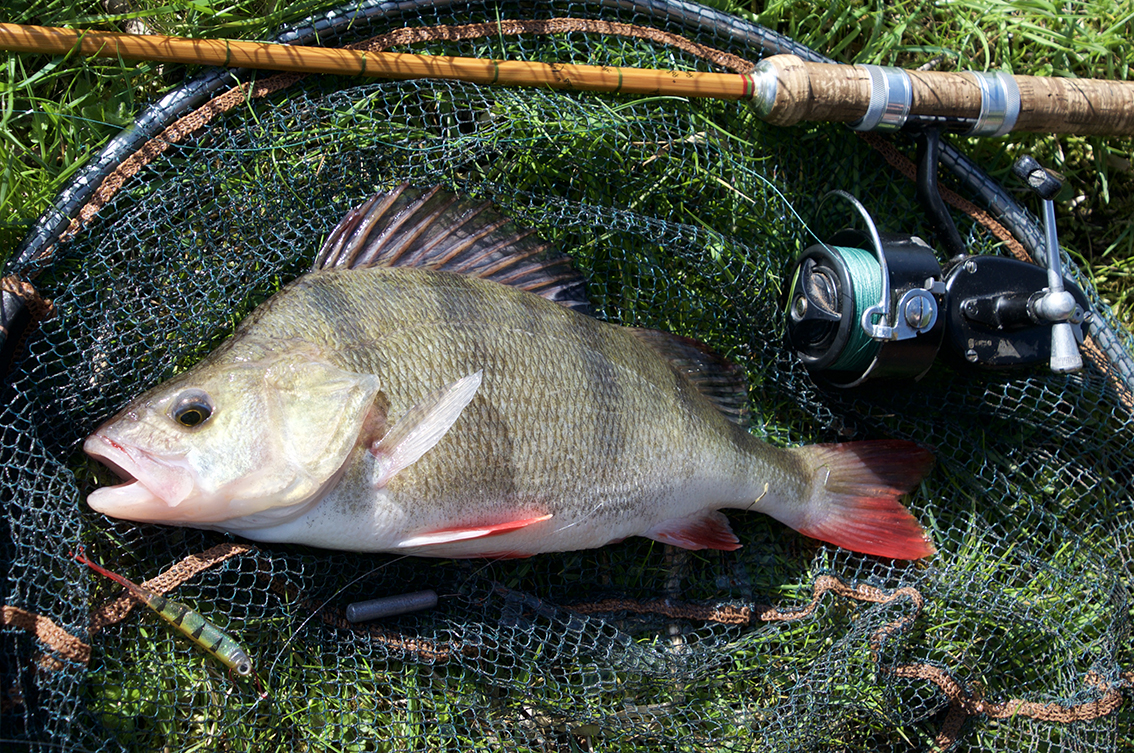 A high-shouldered perch from the near shelf

In  the afternoon, with the sun higher in the sky, we switched to drop shotting and steadily crept our way along a few hundred yards of fairly featureless canal. Featureless to us, but of course what’s under the surface is a different story. It just so happens that when extended at arm’s length, the Hardy Wanless drops a lure straight down onto the shelf of the canal, a primary feature, the underwater super-highway. I can imagine them all down there swimming around with that blank, glassy, impartial look that fish have, giving each other the eye, trying to make up their minds who they’re going to eat. The setup suddenly felt reassuringly efficient. The firmer tip meant I was responsible for whatever movement went into the lure, not the rod, and I could read every bump and crevice along the bottom as surely as if I was seeing it with my own eyes. Then bang! A perch! Small, but a start. Then another, bigger this time. It is exhilarating to get a take immediately under the rod tip. Everything starts so intimately, so quietly, so close to hand. You can feel the first pluck at the lure, you think you’re imagining it, but no, you’re not, then the moment explodes in a flurry of adrenalin as the fish makes a run for it, like being immersed in the silence of a library one moment, and the next you’re up on your desk head banging to AC/DC. When the fish are on, it is high voltage drama. Another perch, with the pale colours we find in fish of clouded waters, brutishly high-shouldered, well clear of the 1lb mark.

Now I knew where the fish were, I reverted to jigging under the rod tip to try and find success with the weighted jig head. There was a tiny pluck, and as I nudged the lure back over the same spot once again, the rod thumped downwards as a chub of around 2lb attempted a display of indignation more suitable to a much bigger fish. The method was proving so successful that Dominic borrowed the rod and expertly caught a fish of his own. I sadly did not meet with the same success when I used his rod. It was so light it almost didn’t feel like a rod at all, and the tip felt so bouncy all I could think about was the lure charging around the bottom of the canal like a rabid dog, every fish running scared, no matter the size. But I could see how brilliant it would be at flicking light lures into tight spots, and how easily it could stay in the hands for a whole day without giving you tennis elbow, and how, with a little practice, it could become a cherished companion. I have followed Dominic’s subsequent adventures with that rod and it has caught an awful lot of fish. But it wasn’t quite for me. 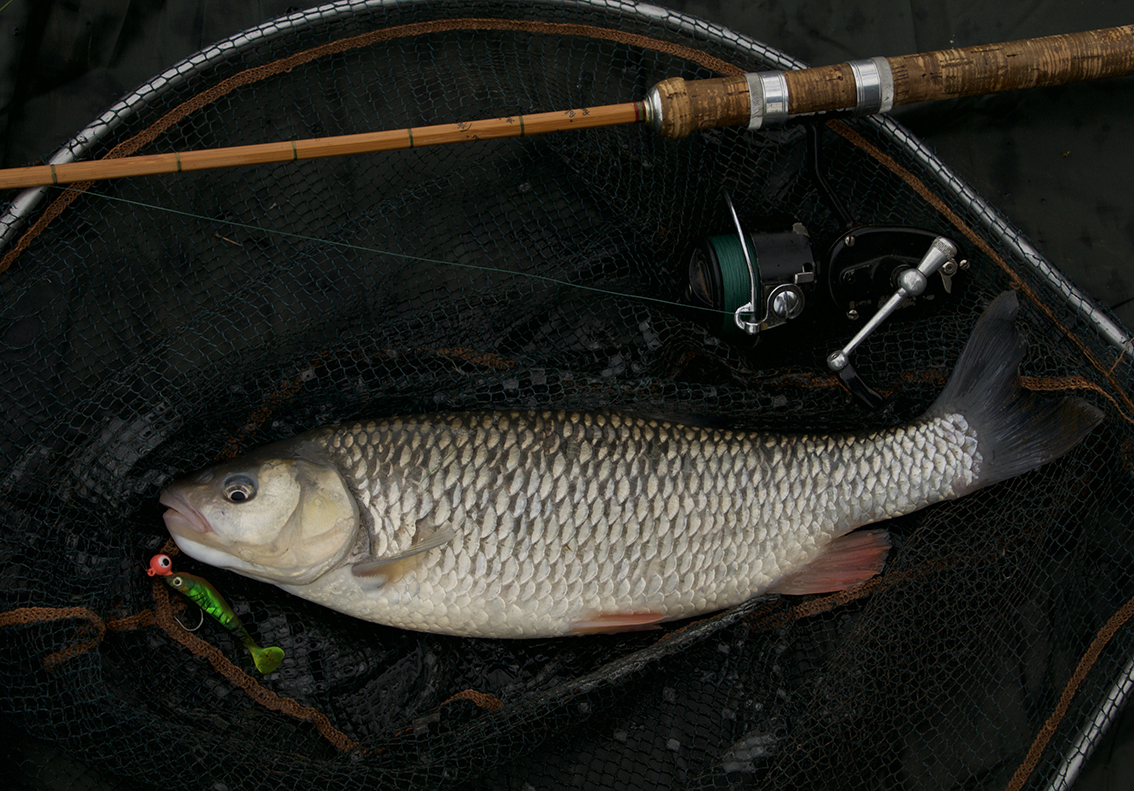 A canal chub on a jig

Afterwards, over several well-deserved pints, we discussed the merits of each setup, and tried to understand why the cane had worked so well while the carbon struggled. Personally, I believe it was luck. Luck that the Wanless was the perfect length to reach just out to the marginal shelf. Luck that the tip was firm enough to not make the lure look too lively to catch on what was a cold day, and luck that of all the rods I could have borrowed, that was the one I got. But for whatever reason, the day belonged to the Hardy Wanless, a vintage split cane spinning rod, now firmly resurrected as a drop shotting master wand. Old, but not obsolete.

On Sunday 13th November Fallon’s Angler shall once again be at the National Vintage Fishing Tackle Fair at Redditch. We will have a special show offer and we always enjoy meeting fellow anglers so do pop by and say hello. Come along and explore the other 35 or so stalls selling everything from cased fish to floats to books, perhaps bring that old rod or reel down for a free valuation, and soak in some of the atmosphere.