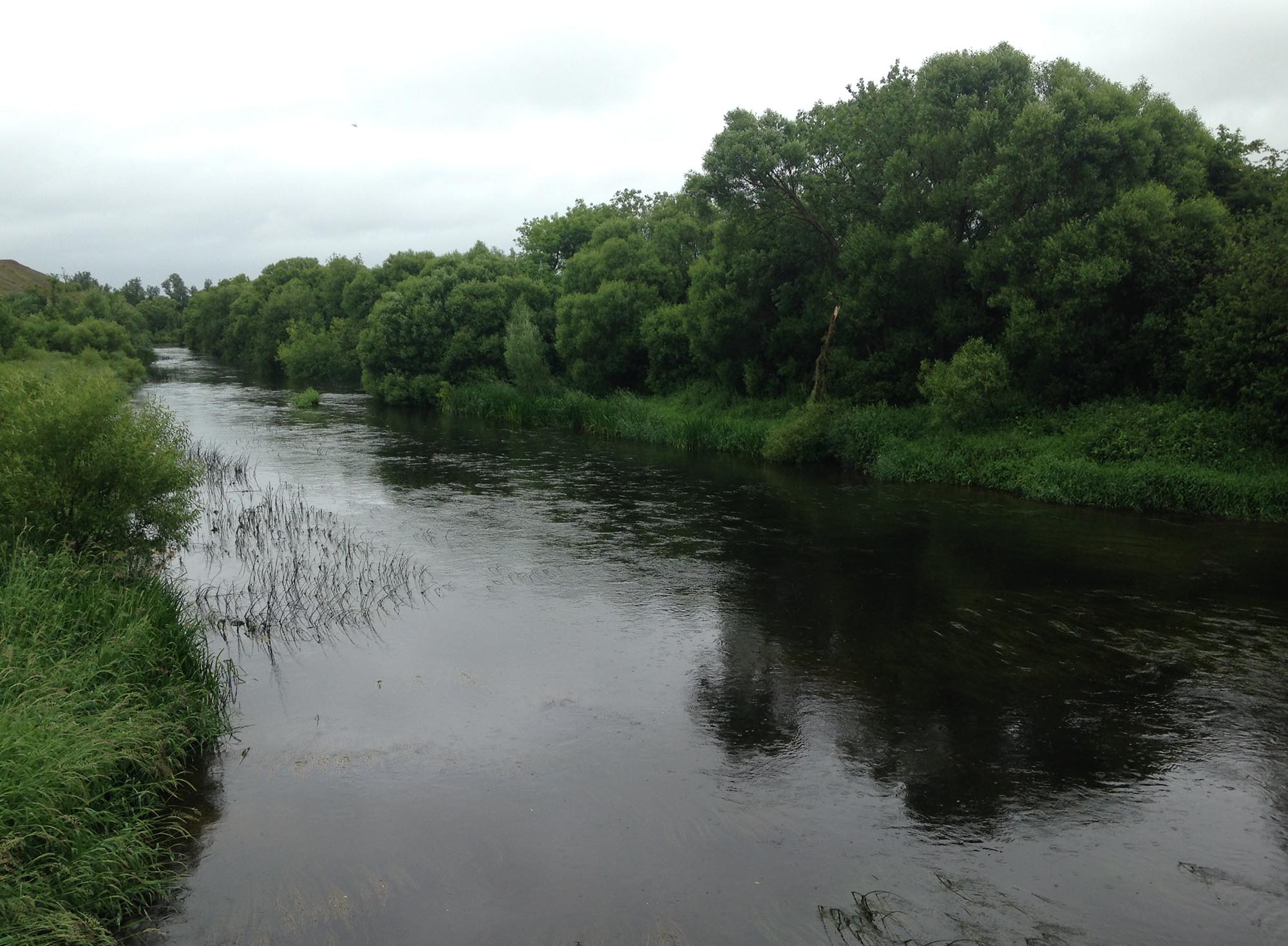 Niall Fallon recalls the life and times of one of Ireland’s best-known anglers, who taught him much about the Tipperary Suir.

We had fished hard, the party of four rods, for the best part of three days. For all of that, bar the balmy hours of the July nights, the sun had beamed benevolently but relentlessly on the river. In the face of its iron glare, every salmon in the Cork Blackwater, if there were indeed any at all, had retired to the infrequent shade for a lengthy snooze.

This was bad news, especially for me, the organiser of the party. The other rods were anglers to whom I owed a day or two’s fishing in return for their own hospitality elsewhere. I had caught on their exclusive waters, had dined and wined in their remote country fishing lodges. They, on the other hand, were fishless.

Frank, the ghillie, was no help at all. While outwardly, at least to the faces of my guests, he maintained an encouraging exterior, he would stalk me by or in the river and mouth gloomy prognostications as to our chances of getting a fish. What few were in it were red as kippers, sulky as a bad-tempered baby. But lasht week! Why, was I in it lashst week I would have killed a ton of fish, begod; twas himself and the son took five good fish beyant in the Mouth O Ross and the Lower Ash Pool… and so on and so on.

I had, of course, heard all of this many times before. Like all salmon anglers who must take their chances as they come, I have become a master of bad timing, arriving invariably just as a good run of fish has dwindled to a few hardy red ‘uns sulking in deep holes and departing just as the beat below was reporting bent rods and whiskied celebrations. Such is a salmon man’s life.

By the morning of the third day, when I looked out from my bedroom window across the tranquil valley on another glittering day, I could no longer face the glum faces of my guests. They felt the same. As they toyed with their bacon and egg, there was talk of golf and afternoon pub sessions. By ten o’clock, the talk had hardened into positive action and the golfers had packed their clubs, discarded their rods and gone. I was left with Tom, my long-term fellow sufferer on abortive fishing trips. He was like me, a non-golfer. Besides which, he was here to fish. He is made of stern stuff.

By noon, we were walking down the fields below Swiss Cottage on the Tipperary Suir. You do not need to fish it to appreciate it. The broad river, even-flowed rippling through beds of waving rich-green weed; the noble grandeur of the immense stands of beech and chestnut and oak guarding its eastern bank; the level, alluvial plain grazed by fat cattle—these are the bedrock accompaniment to a rich limestone river and its plump trout. There is no lovelier river.

The trout, as they always do below Swiss Cottage, were rising lazily, even on this bright day. A trickle of light olives speckled the rippled surface. Swifts and swallows swooped and flickered in the sunlight. The air was balmy.

As we walked slowly downriver, savouring the morning and the anticipation of catching trout (on the Suir, I will tell you, the catching is infinitely more difficult than the anticipation), a small figure strolled along the bank towards us. As we neared, mutual recognition broke forth;

We embraced warmly. I loved this little man, this shy, wry, humorous, pocket-sized doctor from Paris, a devotee of the Suir for many years, a fly-tier of invention and astonishing delicacy. For many years we had fished together both in June and later on in September when he and his wife Marie made their twice-yearly pilgrimage to the peace of the river, away from their high rise apartment in busy Paris.

We had not seen each other for almost a year. We had much to talk about. So we talked.

I had not, at least for some time.

“He is dead.” The doctor’s eyes filled with tears.

I was too shocked to answer. Liamy Farrell—dead. Impossible—but true.

How many people know—knew—of Liamy Farrell of Cahir? Quite a few if the truth be told. Anyone who fished the Suir knew of him, this rotund, stocky man with the grizzled grey head and rubicund face, from which peered a pair of shrewd blue eyes. With his rolling, limping walk—he had been injured when young—and his stumpy rod, he was a permanent and lasting monument from Ardfinnan up through Cahir, up beyond Two Ford Bridges as far upriver as Golden and beyond. Liamy Farrell was the Suir. 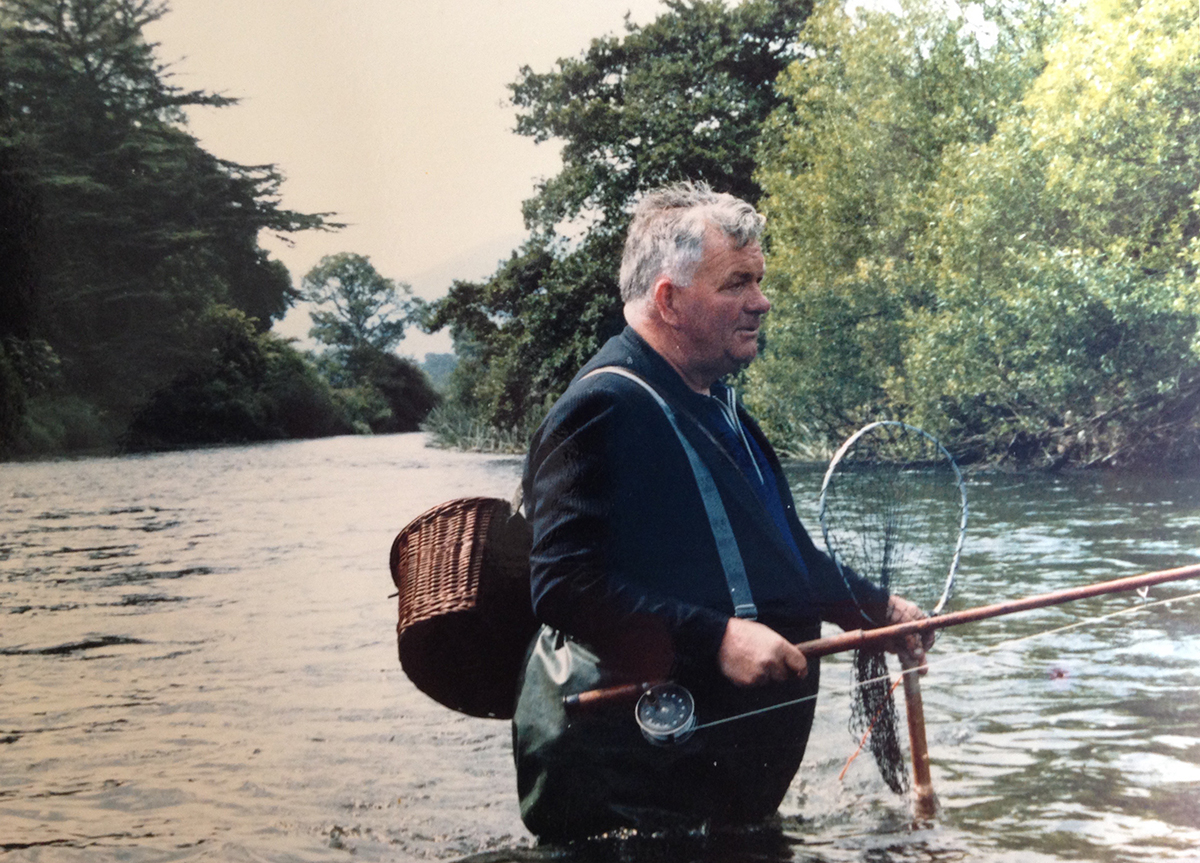 Unquestionably, he was the greatest trout fisherman I ever met. I say that with a reservation or two, since I never saw him tackle any other river except his beloved Suir but from what I heard, he was as effective anywhere in Ireland as he was on his home patch. What made him great—and great he was—was not his casting, his tackle, his flies but his observation and understanding of the river and its moods and its fish. He knew what to do, where to go, what to use at all times. He got inside a trout’s mind and outwitted it from inside the trout’s head. Quite simply, he was a genius.

He was especially effective on the evening rise, that most promising and yet most disappointing of fishing times. Where others were glad to climb out of the strong waters of the Suir with an acceptable brace of trout on a July evening, Liamy would meet you on the bank, in the warm, scented dusk with half a dozen topped by a three-pounder. He would fish beside you and catch three trout to your one—and you doing well at that.

I spent many hours watching him fish, hoping to absorb at least some of the secret. I began to recognise little bits and pieces of technique which were central to his success He liked to wade quite deep often well up to his ample chest and very slowly. He liked to get right in amongst a shoal of feeding trout, moving with the utmost patience and slowness, and fish a very short line either side and above. The Suir trout are maddening; they rise and rise and rise, busily picking the iron blues and blue-winged olives and light and dark olives off the surface, but ignoring your own pattern as it floats above them. As the trout ignored the artificial fly, so Liamy ignored refusals; he would choose a good feeding trout and put his fly over it twenty, thirty even forty times. Eventually it would take.

He tied all his own flies. They were like no other. The dressings were sparse to the point of non-existence, dusk, dun, drab little wisps of things. An exception was his evening sedge, a bright little chunk of a fly with a bit of colour, mostly yellow. He fished two or three of these to a team in the evening, just under the surface, drawing them slightly to him as he fished out the cast. The trout came in long, slashing takes, walloping the water in flying spray as they pounced on the sedges.

But it was his rod which took the astonished eye most. He used just the one, made locally by a man from Cahir it was between eight and nine feet long, built of split cane. It would have handled a day after blue shark or porbeagle with equanimity, so thick and strong was it. I saw him take a fifteen-pound salmon on it one day and the rod bent not an inch in the fight. With it, he would worm and spin for salmon and, wondrous to behold, fish the dry fly for trout. That rod too, has spawned a school of colleagues and you know a Cahir trout-man when you see him with one.

How could he do this, this squat giant of a man whose ponderous bulk was curiously echoed by the stout pole which he wielded with such dexterity? Where mortal men used two-ounce wands of boron and carbon, Liamy gently waved his telegraph pole of rod and with the most delicate touch imaginable, laid his fly and leader on the water like the kiss of an angel. This was part of his secret too—the light touch of the fly on the water, following the most careful approach.

Liamy was good to me. He fished with me and showed me some of his secrets. I had done him a little favour, a small thing to me but a large one to him, and he never forgot it. Always when I came to his house, walked past the side wall and into the shed at the back which was his exclusive domain, the welcome was warm and genuine, the thick burr of his wonderful deep voice a solace to the arriving ear. The back garden was neat and trim to perfection, filled with potatoes and cabbage and carrots and onions; he was a good family man and they surrounded him as often as they could, But his real home was the Suir, wandering thoughtfully by its low banks, taking a leisurely seat under the burnt ash below Swiss Cottage where he could watch his beloved river. That is how I remember him.

His death was as his life had been, hugged close to the heart of his beloved river. He had not been all that well but got down to the river one day and at the bend below the burnt ash tree, outsmarted his final Suir trout. It weighed six pounds. It is his epitaph.

The Osprey Specimen Group by Various
Casting Shadows: Fish and Fishing in Britain by Tom Fort