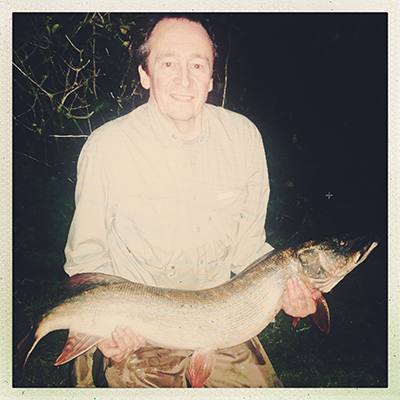 Among the slightly less irritating Car Insurance commercials on television, is a series featuring Paul Whitehouse – and in a couple of them we see his character fishing. Whitehouse is a very good actor (though under-rated as many comedy actors are) but even so it is pretty obvious that he is used to wielding a fishing rod.

He is, in fact, something of a fishing fanatic with a particular love of salmon. He travels extensively to cast, and has made trips as far afield as the Kola Peninsula in Arctic Russia in order to find fish.

Closer to home he loves the Scottish Dee and the chalkstreams of Hampshire, but Whitehouse also enjoys a spot of saltwater fishing, having fished in the Seychelles, Cuba and Costa Rica.

While filming sketches for The Fastshow in Iceland, Whitehouse managed to sneak a rod into his luggage and cast in the rivers around Reykjavik, while regular viewers of the programme might remember Archie, the angling irritant who pronounced every profession as ‘the hardest game in the world.’

Last winter, Whitehouse proved his all round angling ability with the capture

There, in the company of good friends and enormous carp, he ponders the methods and lifestyle choices that have influenced his angling, and whether he might benefit from looking at the water through fresh eyes....

We hope you enjoy it.

Garrett Fallon of Fallon's Angler magazine takes a new look at carp fishing at Ashmead on the Somerset Levels in the South of England.

We normally like to release our latest film at the same time as the magazine, but Nick is putting the gloss on his latest work so it will go live at 1700 tomorrow afternoon.

Garrett was among the first group of anglers to fish Ashmead after it reopened after Lockdown, and with filming options somewhat limited due to ongoing restrictions, it seemed the ideal opportunity for Nick to take along his film equipment and capture the essence of this remarkable place and Garrett's efforts at unlocking its secrets....

Look out for a link here, or subscribe to our YouTube Channel ( www.youtube.com/channel/UCflHL8ctnY7gtyg29d627nw) for notifications of all future releases. ... See MoreSee Less