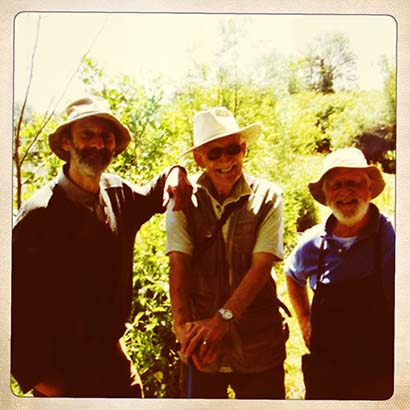 As the crucian (see Fish we Like) evokes memories of first casts in small, overgrown pools, so the name Peter Rolfe becomes ever more synonymous with it. He is a reluctant ‘expert’, but anyone with such a deep affection and understanding of a species cannot deny the association.

A retired schoolmaster, Peter’s interest in freshwater ecology led to his involvement in a series of small ponds in south Wiltshire. Here, a fortunate few can fish for crucians weighing in excess of three pounds, while Peter’s recent studies on another private string of pools has led to some extraordinary discoveries.

He has written of his passions in two books, The Net on the Garage Wall, and Crock of Gold, and though he still makes an occasional cast, is often happiest simply watching the water and listening to birdsong.

Peter is pictured (left middle) with a couple of anglers grateful of his work.

Lovely to see Polly Atkins on this evening’s BBC CountryFile.

We are honoured to have shared some of her work in the latest issue of Fallon’s Angler - even though we dropped a ‘t’....

It's been lovely to work with Adam Chetwood of late. A renowned musician, Adam provided the soundtrack to our latest Ashmead film - and he makes his debut as a writer in the latest Issue.

Some stunning photography too, from Lloyd Winters.