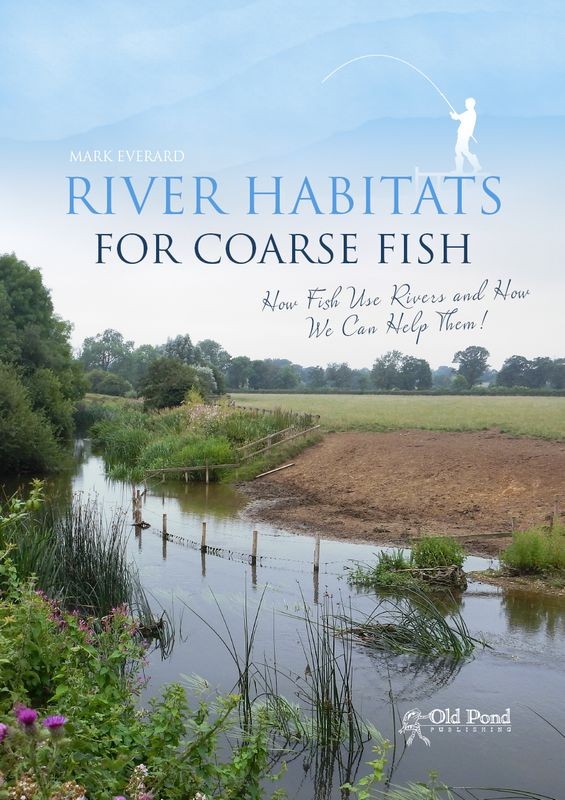 Since the US publication of Robert Hunt’s Trout Stream Therapy (1993), followed by the Wild Trout Trust’s Guide to Improving Trout Streams (2002) and two editions of The Wild Trout Survival Guide (2006 and 2012), most river restoration manuals have focused on salmonids as a river system’s key indicator species.

Sort out the habitat for trout, the argument goes, and it’ll be good for all the coarse fish too. In many places, that’s a pretty accurate rule of thumb: dace and barbel, for instance, use the same silt-free gravels for spawning that the trout also need at the other end of the year. But the lowland reaches of many rivers, not to mention the pressures upon them, aren’t the same as their higher-gradient trout or even grayling zones, and, just like trout, coarse fish often need subtly different habitats at different stages of their lives.

So, if we’re talking about managing whole catchments for fish, we also need to talk about chub, dace, roach and barbel. Enter, the author of River Habitats for Coarse Fish.

Dr Mark Everard is well known as a specimen roach hunter, and his captures have earned him the nickname ‘Dr Redfin’ in the angling weeklies. He’s a prolific writer and broadcaster, with a day job as a respected fisheries biologist which earned him a seat on the Moran Committee to advise the government on fisheries policy. He’s also one of the driving forces behind the idea of ecosystem services in the UK – a rational way of valuing everything a healthy environment gives us, from food, flood defence and building materials, to spiritual inspiration and good fishing. And as one of the founding fathers of the Bristol Avon Rivers Trust, it undoubtedly occurred to him that the river management world badly needed this manual – manifesto, even – with an angle on coarse fish.

There’s a deceptive lot of information packed into this slim 114-page volume. Having set out the driving forces of fish behaviour (the three F’s… use your imagination!) and the life cycle of each of the major species, the author dives deeply into their requirements. Ideal spawning, nursery and adult habitats are all described, and it’s very revealing to find out how long our rivers, and the fish that live in them, have been subject to disastrous human pressures that are now so culturally ingrained we don’t even see them there:

“Even classic art from the nineteenth century portraying idyllic river scenes often depicts destructive forces. One such well-known example is John Constable’s 1819 painting, The Hay Wain, in which the wagon that gives the painting its title is being driven along the bed of a river, cottages and roads are built right up to the bank top, wooden-shuttered banks displace the natural riparian habitat, the floodplain is converted for agriculture, and the banks are excessively trampled by stock. In fact, many classic English landscape paintings depict bucolic vistas in which rivers are disconnected from their floodplains (often with some bank reinforcement or trampling) and the river channel is plied by heavy boats, blocked by weirs, mills or locks, or is otherwise in a condition that may be culturally meaningful yet is very far from natural. Our modern perception of rivers, even in such classically idyllic depictions, differs substantially from the truly natural environments in which fish evolved”.

So what can we do to help our coarse fish populations in waters with this kind of history? Essentially, it’s all about “rivers with ragged edges”: letting them go rough and shaggy again, and helping them recreate a diverse range of habitats which may not have existed for hundreds of years.

From kneeling willows, and planting trees to reduce avian predation, to the deployment of roach spawning boards, controlling invasive species and starting big plans for fish passage projects, Dr Everard presents a range of options for clubs and anglers of almost every capability. It’s certainly very different from what far too many well-meaning angling club working parties are still doing in the weeks before the start of every fishing season: tidying everything up after the winter floods, making sure no members will risk losing a float in that trailing branch or snaggy root ball. But that’s the author’s intention. It’s all about redressing the balance, and showing us where to start dealing with the habitat bottlenecks that are undoubtedly making our coarse angling far worse than it should be.

Just like most of those the trout-focused manuals that came before it, River Habitats for Coarse Fish is designed to empower ordinary anglers with the knowledge and confidence to start making a real difference to their own river, and thus to their own fishing. If you have any interest in either of these, it’s my strong recommendation to get hold of your own copy today… and maybe buy a few for your fishing pals as well.