By Garrett Fallon on February 3, 2017 in BIG FISH, FALLON FISHES 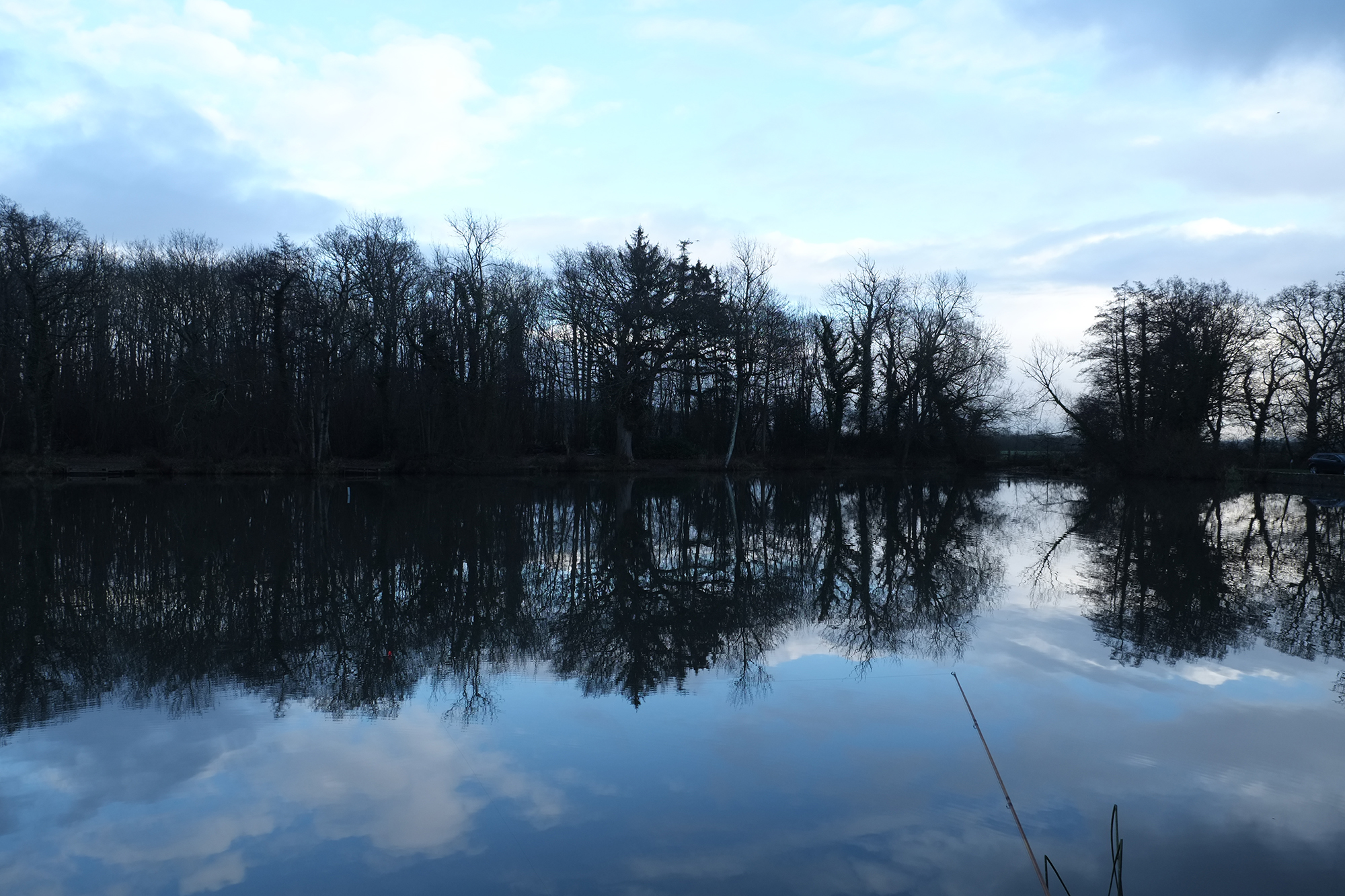 It’s cold. Damn cold. The lake is iced over across two thirds of its width, a mischievous crust selling an illusion of solid ground, and a boisterous wind blows towards the outflow, slowly pushing the thaw with it. Winter can be beautiful, especially with a frost or snow, but nature is naked today without a blanket. Its colours are muted and mixed, like a child’s plasticine, eventually everything becoming one shade or another of brown, like the mud and muck that covers the ground, that is so easily revealed beneath the thin, slippery, pointless layer of last year’s grass. But you expect the dirt and toil in winter, the lack of comfort but the comfort in the lack of warmth that comes with knowing you’re braving the elements to be on the bank, hunting for pike on a winter’s day, when most others are nursing hangovers in bed or enduring the Sunday morning pilgrimage to church. At least we’re fishing. It isn’t supposed to be easy. I remember catching my biggest pike, 25lbs, on the 24th January 1995, in the lashing rain, so wet that my fishing partner took refuge in the car while I fought the fish, and only reappeared as the rain stopped just in time for him to net it. You just never know with pike fishing. The dirt and the grime just might be worth a thousand stories.

We find a bay with a protruding swim, a great oak offering what shelter it can from the biting wind and the occasional icy shower. On either side, branches do their best to dip and touch the surface, but there is clear water to cast into, fishing small mackerel under leger floats, a simple method. It doesn’t start well. I accidently cast too far and close to one of the lines of a hidden carp angler in the next swim. I offer apologies. I didn’t see him, camouflaged and quiet in his solemnity, and I feel foolish and rude. Schoolboy error.

Some days just don’t start well, and you get a feeling of foreboding that makes your hair tingle and your hands shake, putting you on edge. Others give no forewarning of events to come, calamity and incident dropping in to disrupt at any moment: a slipping on the ice on the walk to work; or like that poor builder in Australia, a spider bite on your manhood when you use the toilet. Despite our best laid plans, life enjoys getting in the way, yet we know we shouldn’t ask for trouble by behaving as if we’re looking for it. But I often feel this way in winter, when the days are short and the light rarely brightens enough to prove that the sun is really taking notice; when the weather hasn’t quite made up its mind which way to go—to embrace the cold or grasp for the enlivening warmth of spring. There’s just something about the nowhereland of a mild winter that makes you feel paranoid, suppressed and on guard. But hell, we’re pike fishing, and being on guard is imperative, because you just never, ever know.

4 degrees Celsius. 4 degrees. That’s pretty damn cold. I know it’s that cold because that’s what the dashboard in my car says. And I know that’s what the dashboard says because I’m sitting on a plastic bag in the that car with the engine running, waiting for the heating to click in while water drains everywhere. I am soaked through from my stomach to my toes and there is mud up to my knees. Shit, my wife just had the car cleaned on Wednesday. Bloody pike.

My mobile phone is dying now. It was drowned, after all. A purple line is running vertically down the screen and it has powered down. My fishing fags are soaked to a damp mess of wet tobacco and paper, so I’m even denied my Hamlet moment. I start the car and drive towards the nearest town, hoping to find somewhere that can sell me some dry clothes. I don’t want to stop fishing. I cannot stop fishing. Not after this morning.

Thank heavens for the Tesco Superstore. I am completely drenched, and I acknowledge the occasional stare at my condition, drawn to me as they are by the loud squelching of my bare feet in my shoes.

Men’s customer toilet, half naked and noisy in a narrow cubicle while I change from wet into dry. I wonder what the person in the next cubicle thinks about all the noise and the mass of wet clothes that now litter the floor. I worry that anybody can clearly see through the large gap in the bottom of the cubicle that prevents weirdos from using Tesco’s toilets inappropriately. Does this count as inappropriately? Damn, I’ve put on weight over Christmas. What a way to find out, though I secretly suspected. My waist size is bigger than the trousers I’ve just bought. Too late now, they’ll just have to fit. Big breath! Fucking pike fishing.

I return to the lake just in time to see Nick fighting a pike of about 8lbs. I slowly take me and my ill-fitting new trousers to the swim and watch him return it to the water, a lovely looking fish with the classic colours of winter. When all above ground is muted in colour, those that live in the water often seem to shine in contrast. There’s a special something about pike fishing too… their sheer size, the fact that any take can be from a small jack, or the mother of all fish. I felt that earlier in the morning, when my float disappeared and I reached for my rod. Before I got wet.

“Funny that,” Nick says. “I didn’t get a single bite on my side of the swim so I tried yours. And five minutes later…. Oh, nice trousers. I think you’re better dressed now than when you started the day.”

We continue to laugh and joke. After the morning I’ve had, I’m thinking twice about casting out again, but do anyway. A half hour passes and I get a bite, strike into the fish, then lose it after a short struggle. My feet are getting cold in my car shoes—which are still wet from driving earlier—thin-soled and not built for three hours of standing on the bare ground. I’m thinking of the accidental red-letter days, when for some unknown reason fate deals you a Royal Flush. I keep thinking back to that pike from earlier in the day. I have been rediscovering my pike fishing in the past few months, regaining my confidence with the species. Unhooking through a toothy maw can be daunting, but gradually I feel I’m getting back into the swing of things, and the chance of a huge pike is getting me to the bank more often now.

Another hour passes. I get another bite but again am so on top of the rod I strike too early and lose another pike after a short tussle. Again, my thoughts take me back to that fish from the morning. If only?

The bailiff comes around to say hello and to share some stories. He always has a tale of two worth hearing.

“Nice to see you both. I thought it might be you two who’s fishing,’ he says. “Much happening?”

I laughed. “Yes, I have,” I reply. “Most brutal take I’ve ever experienced from a pike. Shot off like a rocket.” I said. 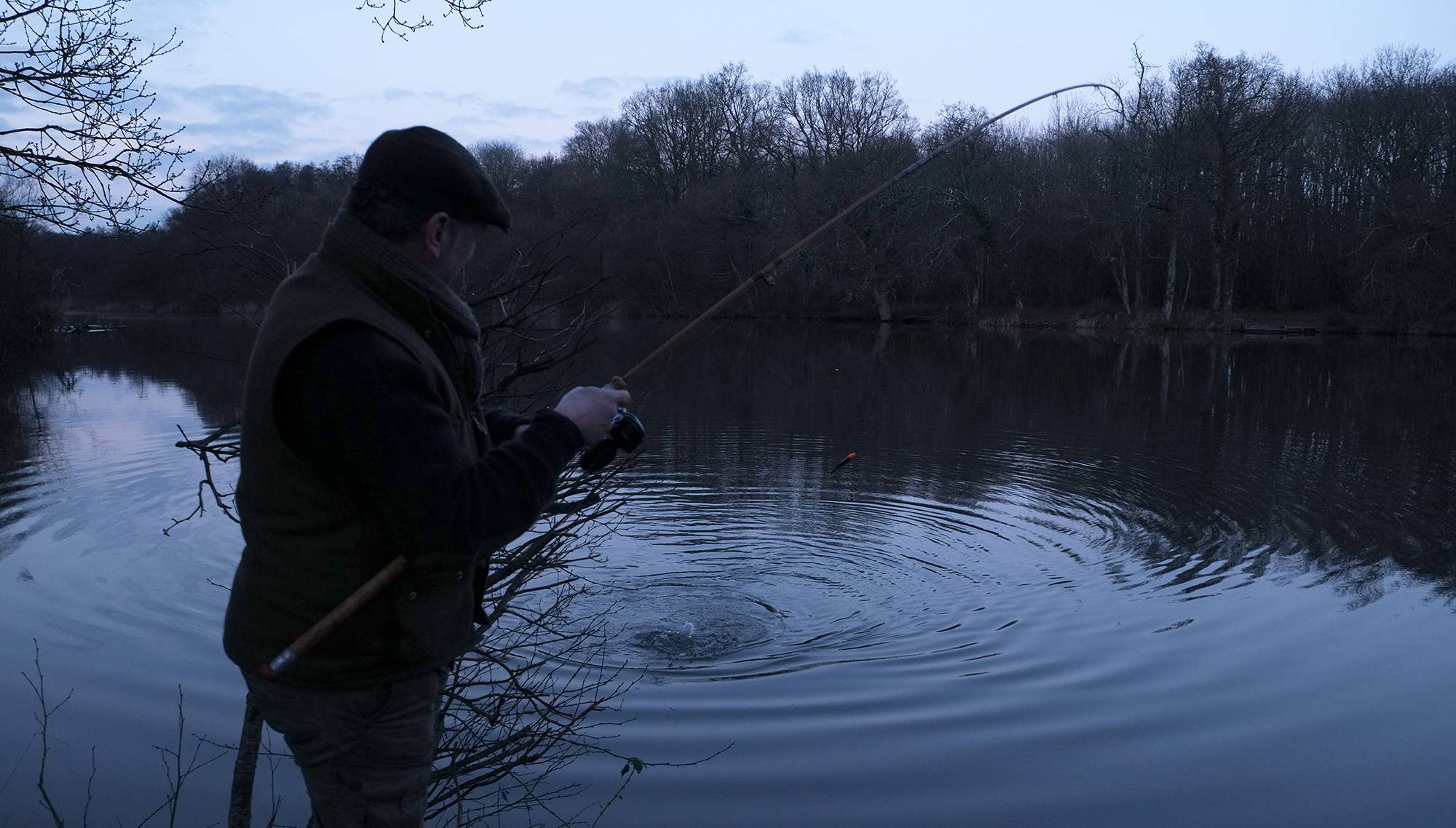 I’m moving my bait around the swim to explore it, but only slightly. There seems to be a definite hotspot, about 10 yards out from the bank, running parallel. Then the float dithers and sinks. I strike properly this time and a small pike soon gives itself up. Despite its beauty, it cannot compete with the excitement of the early morning and I know that I am done for the day.

On the journey back I envision me explaining the mess in the car to my wife. I wonder what she will think when I return home wearing different clothes than I departed in that morning. But I know I have a good story to tell. I think back to that morning, how we’d been fishing for barely half an hour before we decided to ward off the cold with a cup of tea, then all hell broke loose.

I was standing only six feet away from the rod which was propped against a small bush for a rest. I was soon to discover that the clutch had stuck—a bit of grit catching in the spool—so the reel would refuse to give any line, because I saw my float dip then shoot under, and as I moved quickly towards it the rod lurched down, over, then into the air, just as my fingertips grasped at its handle, but too late. It shot into the water like an arrow, a cartoon moment, the hapless angler watching his rod disappear into the depths.  How big is this pike? I thought.

The rod hit the water and was being dragged under and away so I simply jumped in and gave chase. In was not glorious, or manly, or done with any sense of style. I promptly ran off the edge of the bank and my fat legs seemed to keep going, Wile. E Cayote chasing roadrunner off the edge of a cliff before gravity takes him down. And down I went, with a muddy splash and a shock of cold against my nether regions. “Jesus it’s cold” I shouted. My mind was racing as I tried to catch up with the escaping rod and the surely mighty fish that was attached to the other end. Thinking back to that moment, a lot of things seem to have flown through my mind in a very short space of time, like your life flashing before your eyes.

I grabbed the rod, lifted into the fish expecting to be dragged across the lake as if I was water skiing. “We’re going to land this fish after all the trouble it’s caused,” I said. But I was going to go into shock if I didn’t get out from the lake so I turned and handed the rod to Nick and clambered gingerly out as he fought the fish and eventually landed it. The fish that powered off like a torpedo, the fish that made the rod shoot from the bank like an arrow, the fish that forced me to jump straight into a bloody cold lake and cost me £46 in replacement clothes. The monster fish that weighed all of three small pounds.

That’s pike fishing for you. You just never, ever know.

To listen to this story in audio, click here: Audio Blog January 2017 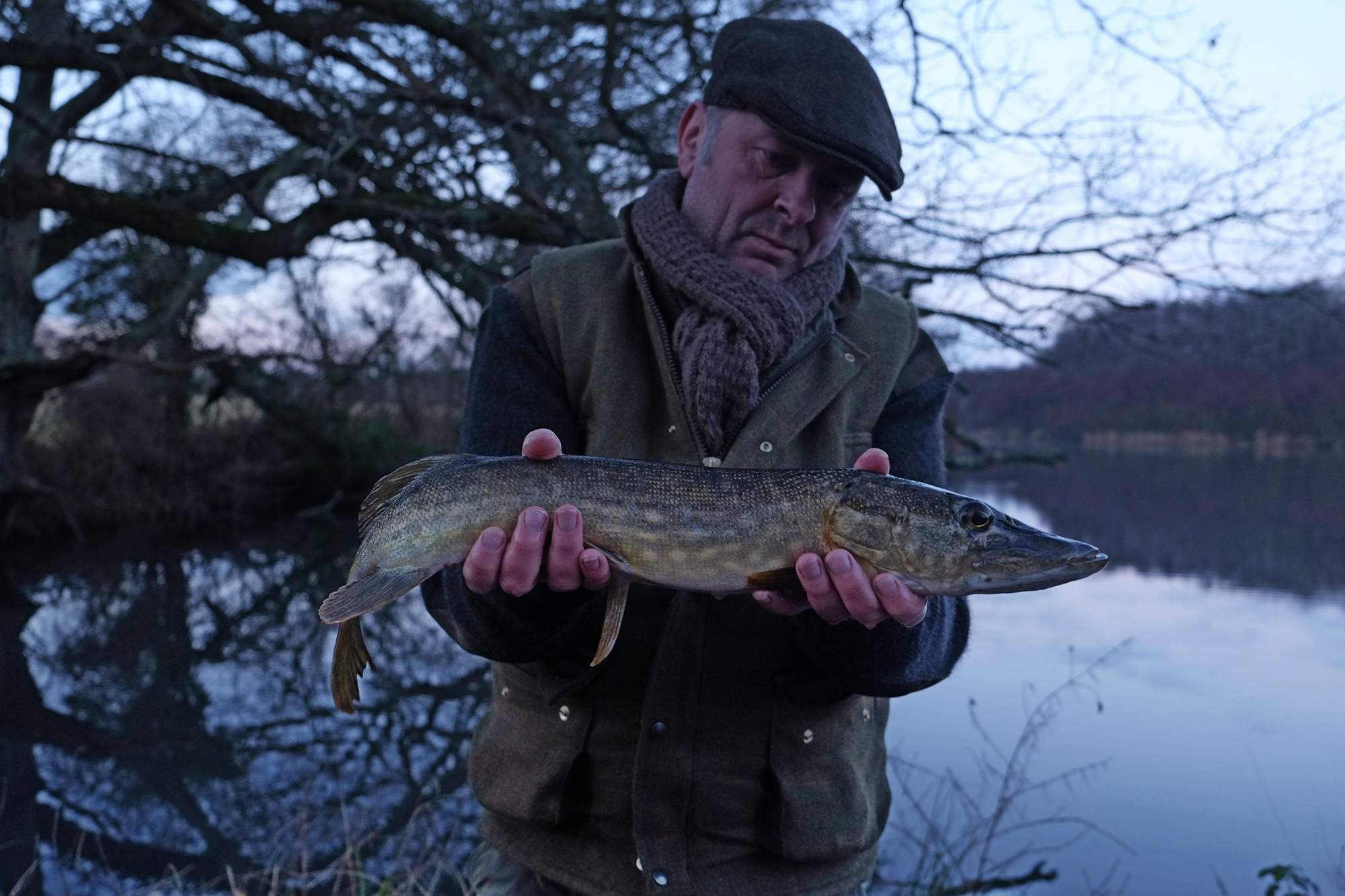