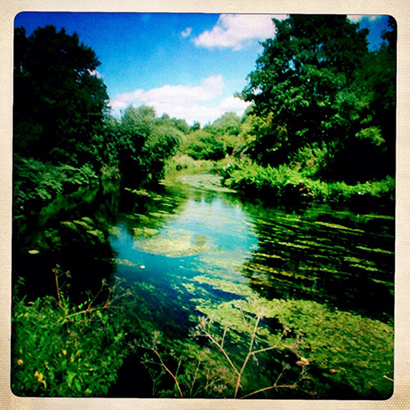 It’s true, and the River Wandle isn’t alone, though it probably offers anglers the greatest variety of fishing.

Fed by water cleansed by the chalk aquifers of the North Downs, the Wandle first shows itself in Croydon, before slipping its way through Merton and Sutton and meeting the Thames at Wandsworth. There is free fishing throughout its length and there are plenty of fish to be found. Trout can be caught (occasionally!) on the dryfly, while barbel to double figures, chub, dace, roach, gudgeon and perch are all present in number.

Due to its location, The Wandle is vulnerable to pollution, and has suffered often through the years. With a little assistance though, it always bounces back, and for those in the know here flows a true treasure of a stream.

For more information, visit the site of the Wandle Piscators (www.wandlepiscators.net), a group of fine-minded individuals united by their love of this river. And have a read of their e-zine—there are some familiar faces to be found…