Henri Bresson (1925-2011) was a celebrated French fly fisherman, known best as creator of the French Tricolore fly. Jack Sellen has put a short extract from Bresson’s biography into English with kind permission from the rights owners and he hopes to translate the whole book, ‘Le Sorcier de Vesoul’ (Vincent Lalu, 2nd edition, La Vie du Rail 2005) at some point. Since its first publication in 1980, the biography has sold over twenty-thousand copies, giving some indication of Bresson’s legacy among French anglers – and Jack wishes here to share some of the great character’s magic. The extract sees the biographer, a close friend of Bresson, spin a yarn set along a stretch of the river Doubs that forms both a natural and official border between France and Switzerland, in the shadow of the Jura mountains. 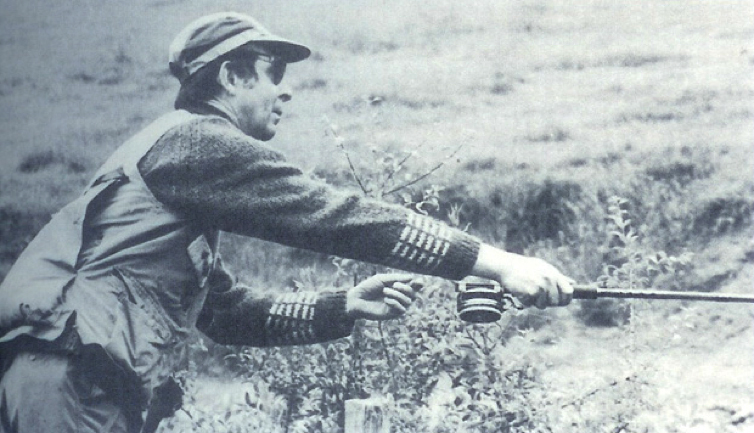 The first question from anyone settling in at the Moulin: “Is Bresson coming?”

To which Pierre Choulet always responds with a little white lie, to keep up their spirits, “Yes, by the end of the week, apparently.”

One or two of Bresson’s guided tours have become renowned. There is that of the trout caught by sight, told to me a good dozen or so times by different people.

It was three in the afternoon at the height of summer and Henri, accompanied by several clients from the hotel, was going for a short after-dinner stroll, rod in hand. The midday meal had been hearty and they were also well-watered, so a walk seemed appropriate. The small group reached the end of the river trail. As usual, they were talking about fishing, without anyone showing any particular interest in the Doubs running a few yards from the narrow path. With a gesture, Henri halts the group: “Gentlemen…have you noticed this little tinker, on the roam beneath our feet?” No, respond the most honest. Yes, say others, though they haven’t seen a thing. “Well I‘ll show you how to take a no-nonsense trout, at three in the afternoon, broad daylight, without hiding or getting excited.” And then the walkers finally spot it, causing them to sit on the verge: a Doubs River trout of over a pound – a beauty.

Henri takes the rod in his right hand, the fly at the end of the leader in his left and he freezes, upright at the top of the bank, peaked cap lowered over his polarised sunglasses. The trout, she lazes in the sun, meandering with no apparent purpose within a radius of five or six yards. Each time that she turns her back, Bresson’s moved another yard down. By the time she turns around, he’s already frozen, eyes motionless – “very important, the eyes, if you move them you can scare off the fish” – and rod upright. One final step. The angler is on the edge of the water and the trout still hasn’t noticed him. On the embankment, the others stifle their exhilaration. One tug on the line and the spring in the rod sends the fly a yard from the bank.

The tiny French Tricolore lands at the moment the fish has begun another turn. Bresson still hasn’t budged. The trout is not far from the fly now. An imperceptible flick of the wrist and the tiny tuft of feathers suddenly animates. This takes place within a tenth of a second; just long enough for the trout to rush at the fly, and take it.

“Hooked!” comes the cry from twelve lungs at once. Henri Bresson laughs. “As you can see, you needn’t wait until evening to fish.”