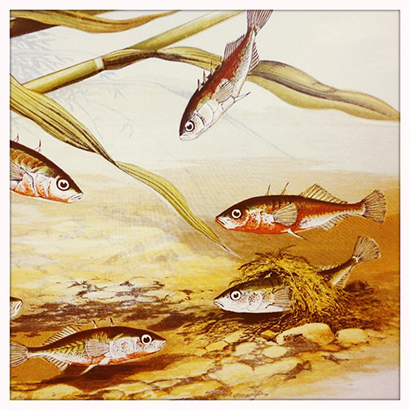 Anyone watching the current series of Springwatch on BBC2 may have been rapt by the trials of Spineless Si – the stickleback looking for love. Alternatively you may have been left cold by the excess sentiment or irritated at the need to anthropomorphize every bloody living thing.

Of course, the most important thing is that fish are being featured on prime time television, and the three-spined stickleback (Gasterosteus aculeatus) is getting some well-deserved airtime.

The three spined is a tiny fish, typically 2 inches long when mature, and is found in a variety of habitats. It has a high tolerance of salinity and so is found in coastal marshland and waterways connected directly with the sea. Every spring, the male builds a nest (glued together with spiggin which is secreted from the kidneys) into which he persuades a females to lay her eggs. He then fertilises and protects the eggs, fanning them to keep them oxygenated, until the fry are strong enough to disperse.