As an Irishman I’m comfortable with rain, in fact I miss it when it hasn’t fallen for a while. I love the way the ground opens up to drink it after a dry spell, like that first pint after work on a Friday. You can feel the earth’s thirst being sated and the plants being revived, and the air somehow feels different. Stop for a moment and breath it in, just as the rain has halted and the drips from the leaves on the trees slow gradually to the point where you can make them out from each other—rather than the din of a million droplets creating a torrential roar—and you’ll see what I mean. There is tangible change, optimistic and refreshed, the morning’s shower after the hangover.

Unless you’ve been living on the moon you’ll know that there’s been a lot of rainfall recently. You’d sooner be able to trot a balsa float down Niagara Falls as hold a 3oz lead on the bottom. Fish everywhere are taking refuge and hiding in holes, or soon finding themselves in new territory, swimming down roads and into kitchens, while the people who live there rescue cows from trees and get their groceries delivered by canoe. Enough is enough. When the ground gets too sodden everything feels heavy, mired in mud, weighed down, sloppy, slippery and lazy. The fields hold what they can, the roots of the trees do their best, but ultimately if the water keeps coming, then soon the ground can hold no more, and the water must make its inexorable way to the sea, pushing aside everything in its path. The river quickly turns from friend to foe, from life giver to life taker. It’s put on its angry face and is slapping us around the chops. But floods are nothing new. Perhaps we’ve just forgotten how to live with them.

I have been enjoying my recent reacquaintance with river fishing. Not since I was in short trousers have I spent so much time by flowing water. This is partly due to my discovery of the art of trotting, and not the type that involves a horse. Where previously I ledgered or lure fished on rivers—big feeders on the Shannon for bream; plugs, spoons and spinners on the Boyne or Blackwater for salmon or pike—watching a float hurry downstream is a new addiction; any second now it can go under, even when nothing has happened for hours. You can rove the river and cover a lot of ground quickly, anticipation is key, adrenalin is pumping, and we learn to read the riverbed as well as the currents, by watching the float dance.

I got away from the brown river and went instead to an old estate lake with our photographer Nick, to celebrate our sending Fallon’s Angler 5 to the printers by trying to forget about work. Nestled in a shallow valley, the lake was created by the building of a damn wall. We see these all over the UK, but not so much in Ireland, so they hold a unique charm for me, a reminder of where I am, that I am living somewhere other than where I was born (a different country even), that I am fishing in the shadow of an engineer who masterminded its construction some centuries previously, for reasons that were no doubt important at the time—industrial or aesthetic—but which probably had little to do with casting a line. History joins you on the bankside and lets you sit with it momentarily. With natural waters you wonder at the geological causes, but with manmade versions you often know exactly, less to do with nature and more to do with human nature.

I am enjoying the transition from flowing water to still, like greeting an old friend. Where the river changes all the time—even over centuries taking different routes—the lake, if looked after, stays largely the same. It can age gracefully, the silver-haired star of the silver screen, still holding court to a train of suitors, or it can slide into neglect, the hoarding uncle with a house full of rubbish and a mouldy sink crowded with dirty dishes. I am standing on the bank and looking at this old girl in the middle of winter. She is not adorned with the splashes of a colourful summer—the floral dress of lilies and the broadleaf trees a silk scarf around her neck—she is cold and bare and has forgotten her makeup, but christ she is gorgeous all the same.

We try first for pike: single hook through the head of a sprat, scented with oil for added attraction—perfume on the neck in the hope of a kiss—under a bung and out to drift freely. But the fields have become so sodden that they do what sponges do and release their water. With it comes mud, and the lake is the colour of cappuccino, with the stiff Northerly wind whipping up a foam. The pike fishing is hopeless, and cold. The old girl is playing hard to get. We consider our options.

There is a second, smaller lake, a big pond really. There are rumours of sizeable perch. This lies just beyond the damn wall, down the valley slightly, out of the wind. It’s a no-brainer, and within five minutes we’re fishing into stillness, where before our floats bobbed around like plastic ducks in a jacuzzi. There is a small island—a good feature—but the reed beds under the rod tip have died down, their stalks retreating for the winter and looking limp and colourless, rather than the erect versions of a vibrant summer. I’m thinking that if I were a fish, I’d be hunkered down with the comfort of vegetation a blanket against the plummeting temperatures, a welcome arm around the shoulders on a cold day.

I have a thing about perch, a fish crush. They get far too much attention from me and it is completely unreciprocated, but I still bought some prawn cocktail on a whim in a service station on the way, just in case. I was coming after pike so it suddenly felt like I was planning an affair. Disregarding the accompanying sauce—would a mixture of Worcestershire, horseradish and Tabasco work for fish?—I cut the prawns into smaller sections and toss them tight to the reeds, and along the edge of the bed for a few yards, a trail of breadcrumbs, “come to papa”. I am using them sparingly, it’s winter after all. I add a single chopped worm along with a smidgen of soil from the worm box. I toss them right where my perch bobber is sitting, hit the nail on the head, and watch as the soil starts to disperse immediately. There is 25 yards of open water, but the float is sitting inside the first foot, taking refuge from the great expanse, holding onto something for dear life. 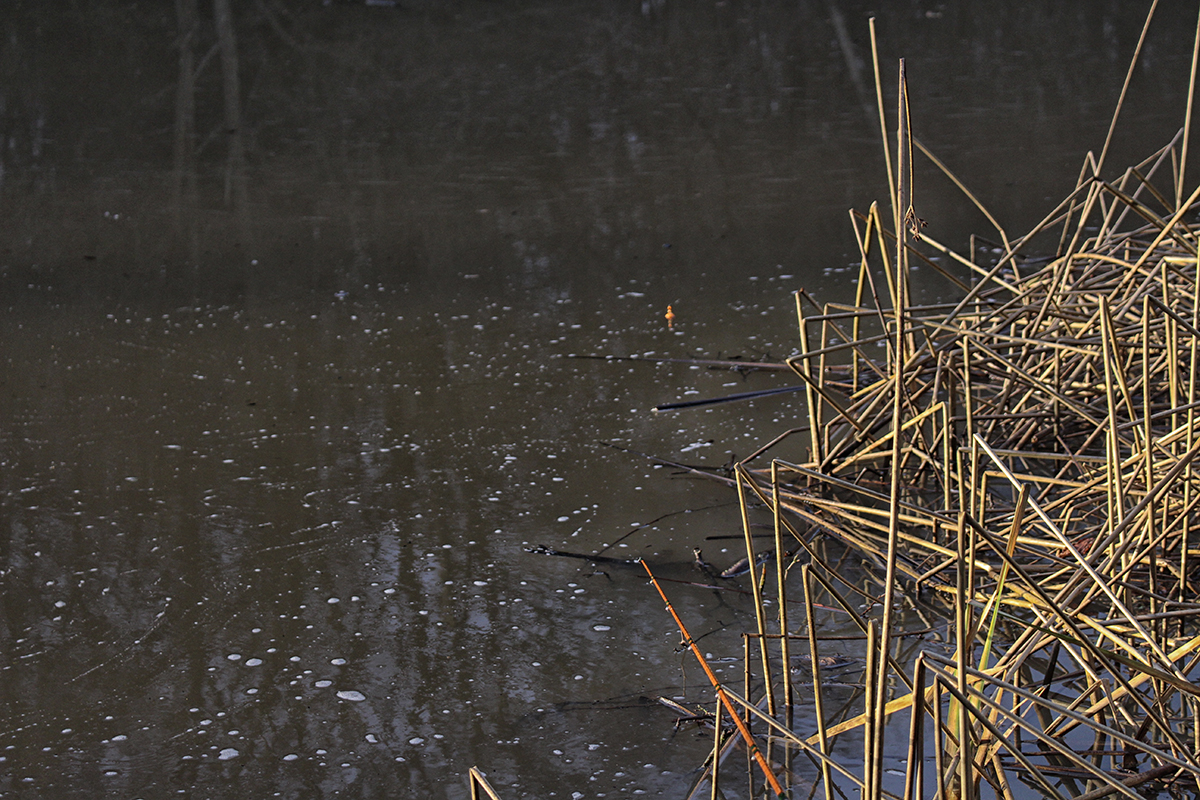 I am reminded of a story I heard Chris Yates tell when he launched the Lost Diaries at Rough Trade in London. He’s fishing a carp lake and is nestled hidden in the margins when a carp angler trundles his barrel-load of gear right next to him. He’s panting after his exertion but is looking keenly at the lake.

“Oh, hello. Sorry, I didn’t see you there,” the man replies.

“Here for week?” Chris asks, looking at the mass of tackle the man has carried on his wheelbarrow, and the sweaty brow he carries on his forehead.

“No, just for the day. I have to go back and get the second lot now.”

When he returns he starts to spod out huge quantities of bait into the lake, raining down such a blitz of boilies that surely any carp for miles would flee the scene. Meanwhile, the line from Chris’s rod drops straight down into the margins.

“There’s a gravel bar out there. The fish feed along it. That’s where you’ll catch them,” the man says, barely audible through the whoosh and splash of the spodding.

“No you won’t get anything there. Nobody fishes the margins here. All the fish are caught on the gravel bar,” the man retorts with the assurance of someone who feels he needs to defend his faith.

“Really?” Chris asks. “Have a look here.” He points to the water right beneath his feet.

The man dawdles over and slowly peers into the depths. There are several big carp right under the rod tip, with a couple of huge fish among them. He nearly has a heart attack.

“Bloody hell! That’s amazing. But you’ll never catch them there. They feed on the gravel bar,” he says assertively.

“Really?” Chris asks. “Watch this.” And with that he removes a corner of his sandwich and rolls it into a ball, then drops it into the water with a gentle plop. The bait descends for a few feet until one of the big fish simply turns and devours it without a second glance, before it has even hit bottom.

“Flipping heck!” exclaims the man, now the pallor of an atheist who’s just seen a vision of the Virgin Mary. “But why aren’t you catching them?” he asks.

“Well, I’m trying to catch the 3lb perch that’s underneath them, and at the moment they’re in the way!” Chris answers.*

I can’t see anything through the murk, but I imagine the giant carp under the rod tip, hiding the big perch in their shadows. The float is doing just enough to keep me entertained. Every now and again it dips almost imperceptibly. When you stare at something long enough it starts to play tricks on your mind. Did that painting just wink at me? Did the float just move? Then it dips sharply but too quickly for me to react. Then nothing. Damn.

I loose feed occasionally, no more than morsels. It is winter but maybe not as far as the fish are concerned, as despite today’s cold it has been unseasonably warm. I watch the occasional reed stem move, as if beneath the water it is being parted by something pushing through, on its way somewhere, determinedly, perhaps to eat my prawn. The float dips, then again, then enough for me to strike. Nothing! Damn. I am a fool. 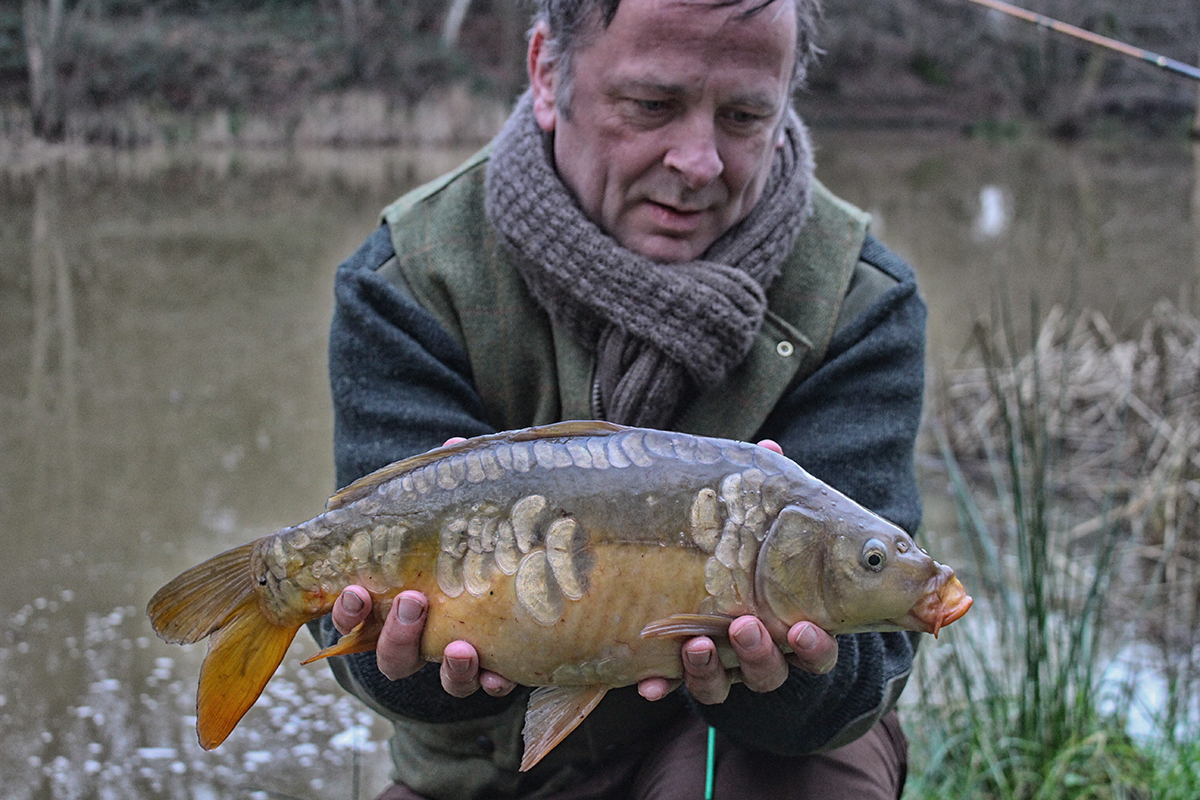 Straight back out there, some free offerings, not too much. Five minutes of nothingness and self-doubt. I am useless. I should never have come. I am an eejit. One effing chance and I fluffed it. The float dips, then again. I am poised, an opportunity for redemption. It dips and slides away and I am into a big perch—I am brilliant, what an angler, look at me—so big in fact that it transmogrifies mysteriously into a young, vigorous 4lb carp, fat as a football and almost gold in its colouration. Hahah! Isn’t fishing fun? I am delighted.

The day is drawing to a close. I am fishing the margins again but with no great intent. It is my first January carp. It is the first carp I have caught on this rod, a beautifully crafted Chapman Quinette. It is, unbelievably, the first fish I have caught on a prawn. The early evening sun is battling with the clouds to brighten our day. Our little lake is jumping between dark and light, between cold and warmth as the sun occasionally breaks through. The winter browns and auburns sing in the evening sunlight, as it reflects magically in the pool.

*With apologies to Mr Yates for the embellished retelling.