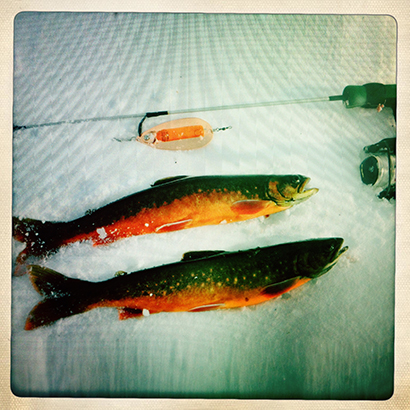 Though fairly rare in the British Isles, the Arctic charr (Salvelinus alpinus) is quite widespread across the deep lakes of Scotland, with populations also found in Ireland, Wales and the Lake District. This is a fish of coldwater that is found throughout the northern hemisphere, with a particular abundance in Norway. In some areas they are migratory and move downstream into saltwater to spawn, whereas many, such as those found in Britain, are landlocked.

Though similar in shape to the brown trout, the charr is far more varied in colour and appearance. Fish differ greatly from one water to the next, causing some confusion as to whether they should all be classified as the same species.

In 1995 a charr weighing 9lb 8oz was caught from Loch Arkaig, near Inverness, and though this fish has not been bettered in British waters since, specimens well over 20lb in weight have been taken elsewhere, with the official rod caught world record being a fish of 32lb 9oz from Canada.

They may be caught on the fly or with small spinners or lures, though bait fishing is also productive. It is this latter method most often employed by Ice fishermen for whom the charr is an oft-encountered species.

Sadly, though, they have just been declared ‘extinct’ in Lough Corrib in the West of Ireland (though surely ‘extinct’ is the wrong word?), and we are thus reminded that they – like all fish — should not be taken for granted.