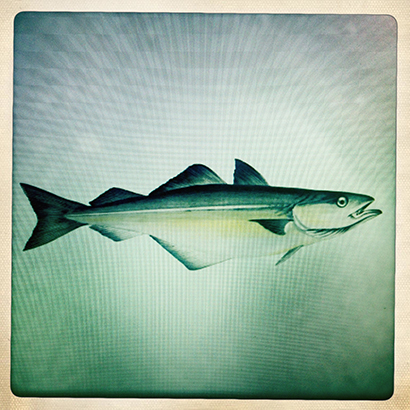 Regular readers of Bits and Pieces (though surely there can be no such thing as an irregular reader?) will be only too aware of the pattern found among many of the fish featured. All too often the species in question is either in decline or facing extinction, and though this particular fish might not be as prolific as it once was, it still swims in healthy number.

The coalfish (Pollachius viren) is a long, streamlined fish, with dark green to black on its back that softens through yellow on the upper flanks before turning to white on the belly. It is similar in appearance and habits to the pollock though it is the more likely of the two to be encountered in the Northern waters of the British Isles. The large mouth and eyes are an indication of its predatory nature, and though it has a varied diet, smaller fish are the most favoured food.

Many anglers will target coalfish with lures from the shore, while their love of wrecks and rough ground make them reasonably easy to find in deeper water – though one should expect to lose a fair bit of tackle when fishing in such places. It’s often worth it though for a fish that fights hard and grows in excess of 40lb.