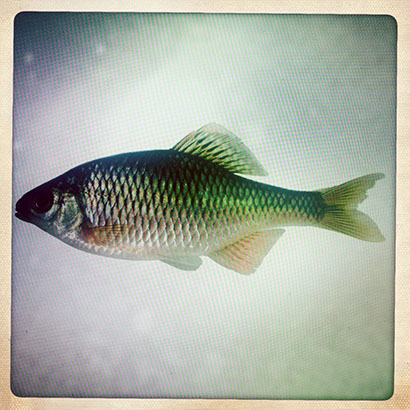 Though not native to the British Isles, the bitterling (Rhodeus amarus) warrants a mention in Bits and Pieces not least for being one the four species for which Dennis Flack held the British Record for simultaneously, but also for a couple of rather peculiar attributes.

The bitterling is a small fish, not unlike a roach in appearance, though it carries a pronounced iridescent stripe along the flank. They have a limited range in Britain, a fact that, alongside their size, means they are rarely targeted on rod and line.

During breeding, the female bitterling lays her eggs in the shell of a freshwater mussel, where the young remain for around a month before leaving as actively swimming fry.

Odder still though, is the fact that the bitterling was once used by doctors to determine pregnancy. The urine of a prospective mother would be injected into a female fish. Should that woman be pregnant, then the hormones within the urine will cause the ovipositors (the egg laying organs) of the bitterling to protrude.

As amazing as this fact is, Fishpool is most curious as to who first thought of trying it…