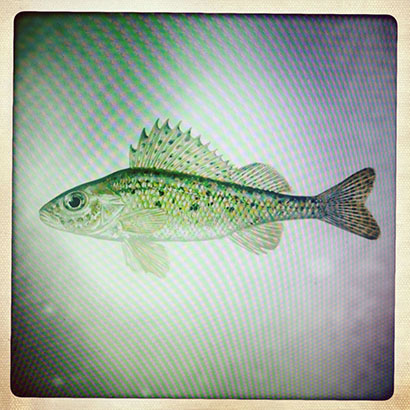 The poor old ruffe (Gymnocephalus cernua) tends to spend his life overlooked. He doesn’t grow very large (the British record is a little over 5oz while Small Fish Catcher Extraordinaire Dennis Flack has caught them to a little over 4oz), and his presence is traditionally seen as a sign that more desirable fish are not. To rub salt into his scales, the ruffe often finds himself described as no more than a ‘dirty looking perch’.

While this point is superficially true (the ruffe is predominantly brown and is also perch-shaped) hold a specimen against the sunlight and he is really rather handsome. There are shimmers of blue and green and a delicate spotting of the fins. The spiky dorsal does not separate like the perch’s and it stands proud like a sail on the mast of a Tall Ship.

The ruffe is not especially common, but is perhaps more widespread than we realise. Fishpool found a section of the Llangollen Canal which was alive with them – and there were some seriously big fish among them.

The ruffe is also known as the pope – a name that though uncertain in origin, has certainly not blessed the fish as it might. The practice of ‘corking the pope’ was made by anti-papalists who would stick corks onto the fish’s spine and then watch the fish bob around helplessly on the water’s surface. This beautiful little fish certainly deserves much better than that.