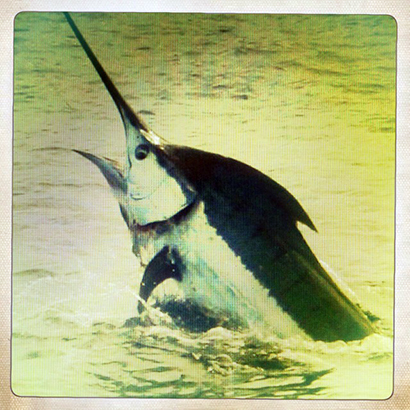 Few fish capture the imagination like the Atlantic blue marlin (Makaira nigricans). For many, these are the ultimate game fish. Not only do they grow huge—the rod caught record is over 1400lb—they fight like no other fish. Blue marlin are built for speed—with slim, streamlined bodies, great fan like pectorals that can fold into grooves in the body, and huge scimitar shaped tails.

The bill is long and sharp, and is used to slash and stun prey fish such as mackerel and tuna. The blue marlin is a fish of the open ocean, and targeting them will require as much patience as skill. Days, even weeks will pass with not a sign, before a marlin crashes into a surface-trolled lure and chaotic carnage ensues.

Over fishing has impacted greatly on the numbers of blue marlin, and they are listed as a threatened species. Perhaps the best way to enjoy them is either through the art of Guy Harvey (see People we Like) or the words of Ernest Hemingway (see Things we Like).